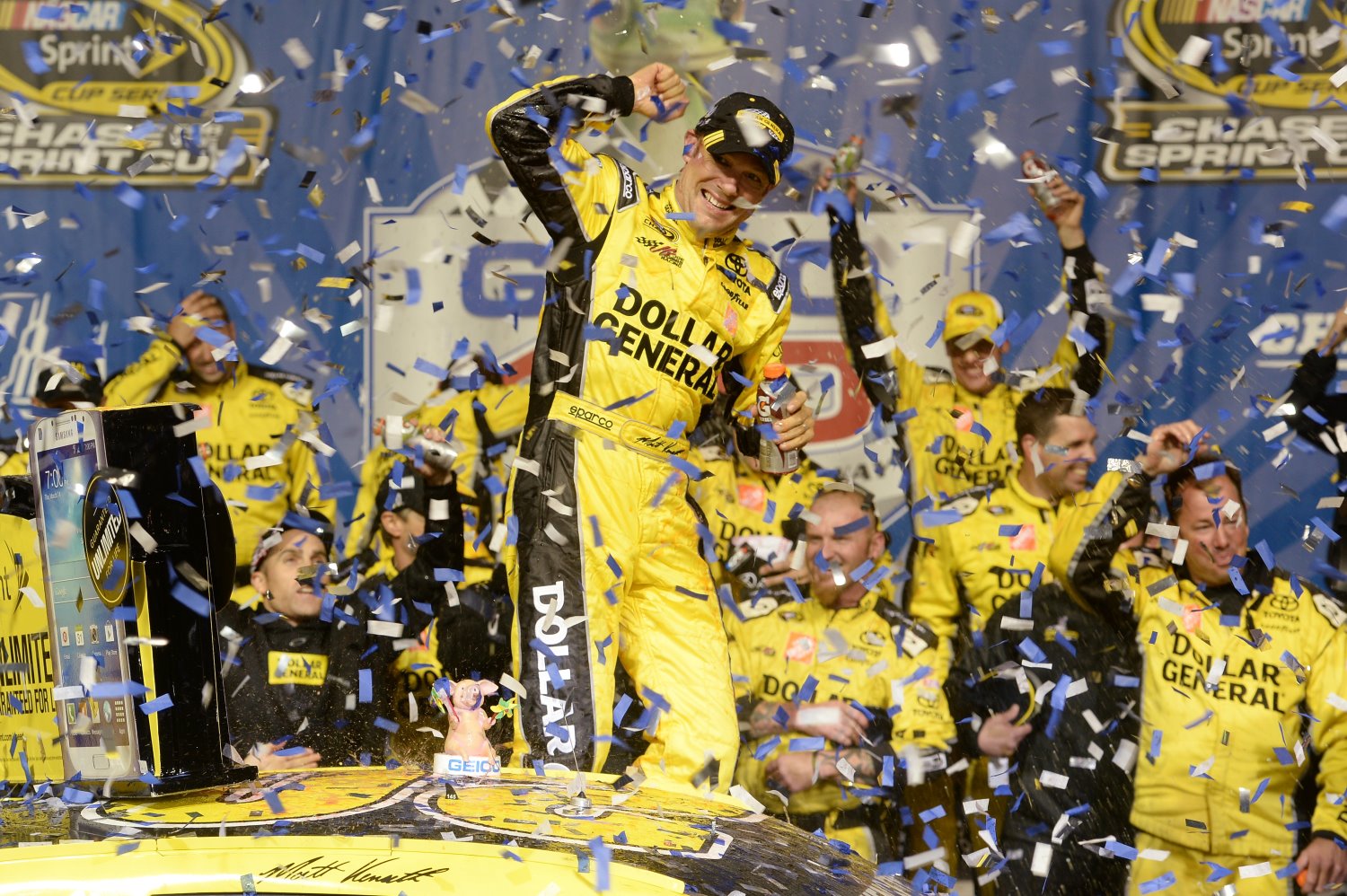 TOYOTA TRIO TO TRY FOR CHAMPIONSHIP: This weekend’s NASCAR Sprint Cup Series (NSCS) race at Chicagoland Speedway will kick off this year’s Chase for the NASCAR Sprint Cup. Three Camry drivers — Kyle Busch, Denny Hamlin and Matt Kenseth will compete in this year’s championship contest and are looking for a win in Chicago to advance to the next round of the new Chase format that includes 16 drivers and four playoff rounds. Both Busch and Hamlin earned spots in the Chase with victories during the season’s first 26 races, and Kenseth made the Chase based on his position in the point standings.

CHASES OF PAST: This year’s showing in the Chase for Camry drivers — having three Joe Gibbs Racing (JGR) drivers compete for the title — equals the most Toyota drivers in the Chase. It matches the three Camry drivers that competed for the title in 2008, 2010, 2012 and 2013. The previous best end-of-year performances by Toyota Chase drivers have been runner-up results by Hamlin (2010), Clint Bowyer (2012) and Kenseth (2013). In 2003, Kenseth won the championship — the last year before the Chase was instituted.

CHICAGO RESULTS: Toyota drivers have earned eight NASCAR victories at Chicagoland Speedway, including three NSCS triumphs, four NASCAR Nationwide Series (NNS) wins and three NASCAR Camping World Truck Series (NCWTS) checkered flags. Toyota driver Busch has seven NASCAR victories at Chicagoland — one NSCS (2008), three NNS (2008, 2010 and 2013) and three NCWTS (2009, 2010 and 2013) — and is the only driver to win in all three series at the 1.5-mile track. Kenseth opened the 2013 Chase with a win at Chicago after leading 89 laps (of 267) and Busch finished in the runner-up spot after leading 67 laps last year.

TOYOTA’S 10 YEARS IN NASCAR: Toyota is celebrating its 10th anniversary in NASCAR this year. Here is another highlight from Toyota’s first 10 years in the sport. Toyota driver Matt Kenseth wins the first race of the 2013 Chase with a victory at Chicagoland Speedway (Sept. 15, 2013).

NASCAR Sprint Cup Series (NSCS): Toyota’s Ed Laukes (Vice President, Marketing, Performance and Guest Experience) earned a degree in business administration from Chicago’s DePaul University … Nick Odell, front tire changer on Kyle Busch’s No. 18 team, is from Springfield, Ill., and will pit for Busch in all three races this weekend … Toyota is the official vehicle of Chicagoland Speedway and will serve as the pace car for the weekend’s races.

Do you approach this year’s Chase any differently than last year when you were the top seed?

“I don’t think my approach is any different. The rules are a little bit different obviously. We won at Chicago last year, then the next two races you might be thinking about things differently knowing the way it’s setup now that whoever wins Chicago, they’re in the Chase. Then the next two are basically meaningless except for testing, finish and pay and all that stuff. I think about it a little differently because last year we went into the Chase and had a lot of confidence that as long as we had even luck — I felt like we could really out run everybody or be right next to out running everybody. At the end of the day it wasn’t true because we got out run by the 48 (Jimmie Johnson). We got beat on performance. We didn’t get beat on bad luck necessarily. This year, I don’t feel like that right now. We haven’t had the speed the first 25 weeks to out run everybody even on our best days. We’ve been in position to win a few races if cautions would have not came out or things would have fell our way or whatever. We put ourselves in that spot a few times, but we haven't been nearly as strong as we were last year at this time. I guess you don’t really change your approach, you go out and race as hard as you can and try to finish the best you can and do all that stuff. I realize where we’re at today we need to not have any problems and we need to be perfect. We need to be perfect on pit road and on the race track and execute and all that stuff and get the best finish we can."

How confident do you feel about Chicagoland?

“I think the better you run, the more confident you are naturally. We tested there a few weeks ago and it was okay. I feel like we’ve been gaining on it in performance and we’ve been able to run in the top-five and run pretty good. If you can run up in the top-five and keep putting yourself in position enough times, hopefully eventually you will get those wins. I think we feel pretty good as a group going to Chicago. I thought at Loudon (N.H.) we all ran really good so I think we feel pretty good about going there as well. You do want to go there and get a good start. You want to go get a good finish or even better a win to get the thing started for sure."

What is the strategy for the first round of the Chase?

Do you need to be more aggressive to win races in the Chase?

“It’s important to win, but I don’t think you need to be ultra-aggressive to get those wins. If you finish second every week, it’s going to get you to Homestead, but you have to win Homestead. Last year, we started out with a second and a second — those are two great finishes to have again this year if we could have them and try to move on and get into the second round."

What is your mindset as the Chase starts?

“You know, our mindset is I hope they got some beast race cars coming up for us. A lot of it is you’re living in the moment. Anything can happen. I think these first two segments, for sure you can run like we’ve been running, just kind of be consistent, top-10 or so, and advance. Those last four races — those last two segments — you’re really going to have to have speed to be a contender."

NASCAR Nationwide Series (NNS): Camry drivers Elliott Sadler (fourth) and James Buescher (10th) are currently in the top-10 in the NNS point standings following 25 of 33 races this season … Daniel Suarez will compete in his second career NNS race this weekend, driving for RAB Racing … He’ll race full-time in a Camry for Joe Gibbs Racing in 2015.

NASCAR Camping World Truck Series (NCWTS): Tundra drivers Johnny Sauter (first), Matt Crafton (second), Darrell Wallace Jr. (fourth), German Quiroga (fifth), Timothy Peters (eighth) and Jeb Burton (10th) rank in the top-10 of the NCWTS point standings after 14 of 22 races this season … Tundra drivers have 11 victories this season and 123 since entering the NCWTS in 2004 … Red Horse Racing will run a special decal during races in September to celebrate Hispanic Heritage Month and it will be featured on the Tundra race trucks of Peters and Quiroga … Quiroga is the first Mexican driver to compete full-time in any of NASCAR’s national touring series.