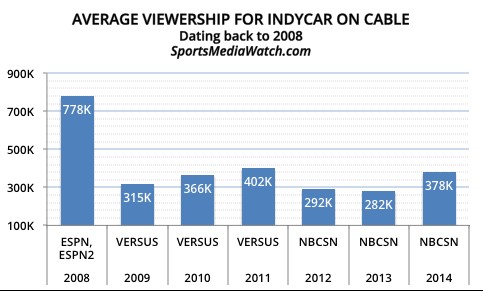 Although television viewership of IndyCar Series races is still lagging far behind what most sponsors and potential sponsors would like to see, there is cause for some optimism in the open-wheel paddock.

The 12 IndyCar races airing this season on NBC Sports Network saw an average rating increase of 34 percent from the cable channel's average viewership of IndyCar races in 2013, according to New York-based Nielsen Media Research. The 2014 season concluded Aug. 30 with a late-night event in California.

This season marks the second consecutive year of TV viewership increases on NBCSN in the two years since Mark Miles became CEO of IndyCar parent Hulman & Co. This year's average viewership was the second-highest at 378,000 viewers since the open-wheel series moved its races to NBCSN in 2009. In 2011, the series' races on NBCSN averaged 402,000 viewers.

The first race of this year's Honda Indy Toronto double-header, scheduled to air July 19 on NBCSN but postponed due to rain and aired the following morning on CNBC, is not included in NBCSN's season average.

Many IndyCar and potential IndyCar sponsors say they'd like to see the average number of viewers pushed to more than 1 million. Even at that level, IndyCar races would only be attracting a small fraction of what NFL, NBA and NASCAR events draw.

Jon Miller, NBC Sports and NBCSN president of programming, credits this year's gains to improved scheduling and fewer conflicts between IndyCar and other sporting and entertainment events.

Miller clearly wasn't referring to the scheduling of the season finale in Fontana, California, which saw the green flag drop shortly before 10:30 p.m. EST and registered a 0.18 rating, according to Nielsen.