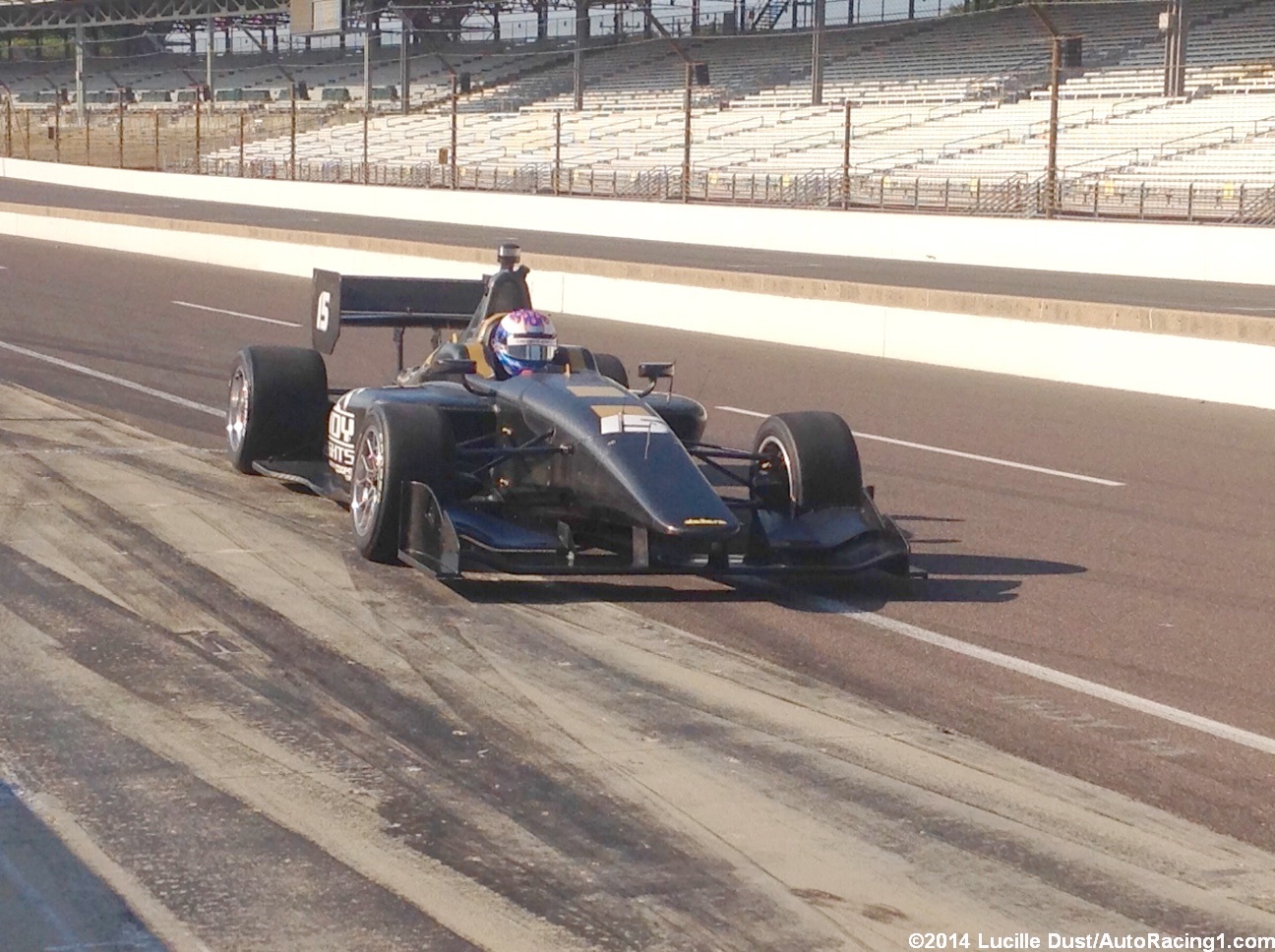 It’s been a few hours since James Hinchcliffe finished his afternoon test session of the Dallara IL-15 Indy Lights Presented by Cooper Tires car at the Indianapolis Motor Speedway road course. The Canadian made fewer setup changes than Scott Dixon, who tested earlier. He said the car was fun to drive and will make a great little race car, noting the increased power with the power with the turbo-charged engine.

Of note, they did make the car a lot softer in the rear than when 2012 Indy Lights champion Tristan Vautier tested at Mid-Ohio. Hinchcliffe said he would need more time in the car to give a further evaluation of what it needed.

After that talk in the media center shifted to the schedule. There was even talk about having a race at IMS in October. A finale at IMS to end the IndyCar season? I have no idea where they may have gotten that idea.

There was also scuttlebutt flying around that IndyCar had seriously discussed the idea of racing at Circuit of the Americas in Austin, TX. However, there were also some in the know saying Texas Motor Speedway President Eddie Gossage had vociferously expressed his displeasure about the idea. We also heard that the rumored airport layout in Houston is a possibility for 2016 with Mike Lanigan promoting a Shell/Pennzoil-sponsored event. Of course, INDYCAR announced recently that the Shell/Pennzoil Grand Prix of Houston would not return for 2015.

There will be further testing of the car next Saturday or Sunday with 2011 Indy Lights champion Josef Newgarden at the wheel.

09/05/14
Here's one for the "you see something new every time you go to the racetrack" category.

A yellow flag came out recently while James Hinchcliffe was driving the new Dallara IL-15 to replace the turn 10 flagman, who has left the Speedway to be with his wife, who recently went into labor.

We did not get the man's name. However, on behalf of every here at AutoRacing1 we wish the parents-to-be and baby our best.

We talked with Tony Cotman, who went over some of the basic specs, which I’m sure a lot of you know. But we’ll briefly repeat, bullet-point style.

â€¢ 2-liter, 4-cylinder inline engine
â€¢ turbo charged
â€¢ fully-stressed
â€¢ no fuel specifications as yet
â€¢ two different types of fuel have been tested
â€¢ blocks are being built in England, many of the parts are being built in the United States

Cotman is still not sure if, or who may badge the Advanced Engine Research engine. Dan Layton of Honda Performance Development is here, and Cotman told us to ask him about the badging.

We spoke with Scott Dixon after the three-time Verizon IndyCar Series champion tested the car this morning on the IMS road course. Below, are a few of Dixon’s observations, bullet-point style:

â€¢ Car vibrates a lot and feels very light
â€¢ No bottoming during his run
â€¢ He likes fact seat can be dropped right into an Indy car
â€¢ Says car gives series more relevancy and will likely attract other European driver trying to ‘move up’ from other series
â€¢ He told James Hinchcliffe that he would go fast because he (Dixon) set up the car.

Last, two-time Indianapolis 500 runner-up Scott Goodyear has arrived on the scene. Hinchcliffe is suited up ready to get on track, but car is still being prepared.

Three-time Verizon IndyCar Series champion and 2000 Indy Lights champion Scott Dixon turned laps earlier. The folks from Dallara told us they were very surprised by Dixon’s driving style, as the Kiwi likes the car particularly soft. This was in contrast to 2012 Indy Lights champion Tristan Vautier who tested at Mid-Ohio last month and requested a much stiffer front.

2014 Indy Lights Champion Gabby Chaves is on hand, as is IndyCar driver James Hinchcliffe. Chaves joked that he was planning on locking Hinch in the John so he could drive the car today. We’ll update that rumor on AR1 as strong shortly. Chaves, as you would expect, told us he is working on an IndyCar ride for 2015.

And so is Hinchcliffe. The Canadian won three Indy Lights races in 2010, and finished second in the championship to Jean-Karl Vernay. He is off to the Bahamas soon for a sponsor appearance and plans to work on his 2015 seat when he returns.

Dan Andersen told us he would like to see 12 teams for next year. They have 10 cars ordered. Rahal, Andretti and Schmidt have not ordered any yet, however, he expects an a order from 2 of the 3 teams mentioned. For what it’s worth, Chaves told us Schmidt has already signed a driver. We’re guessing that might be Jack Harvey?

There is a different engine in the new car. I was going to talk with one of the Dallara guys but they are busy working at the moment, so that will have to wait.