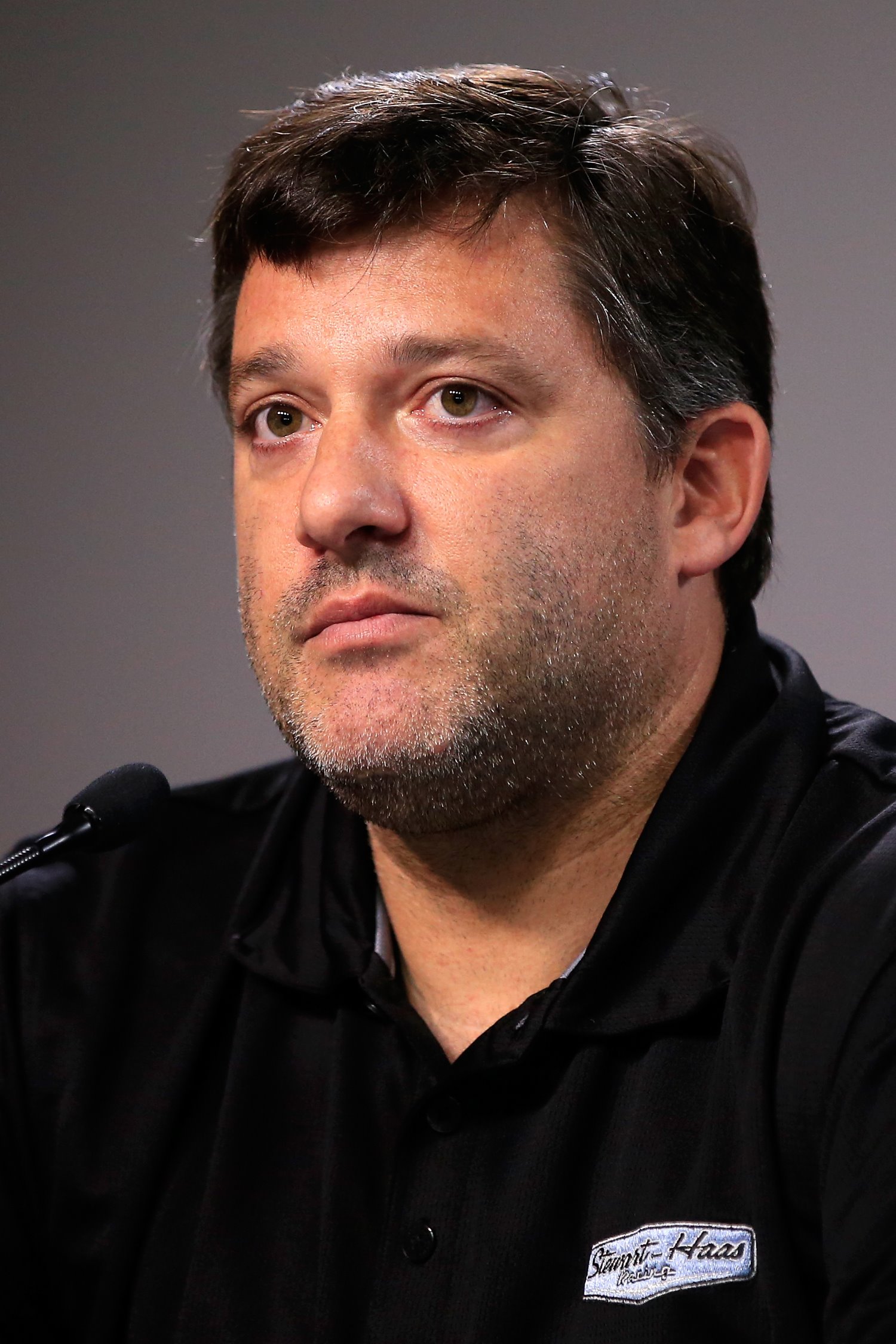 Tony Stewart exhaled heavily as he sank into a chair behind a table with a Dasani water and a Coca-Cola bottle emblazoned with his first name.

It was the only evidence of corporate sponsorship as the three-time Sprint Cup champion made his first public appearance since his sprint car struck and killed Kevin Ward Jr. in an Aug. 9 race in upstate New York. In a halting and quavering voice, Stewart spoke for 2 minutes and 30 seconds before a plain mauve backdrop – an anomaly in a sport whose business model is predicated entirely on Fortune 500 support.

Whether the array of brightly colored sponsor logos remain on his No. 14 Chevrolet or disappear in a cloud of controversy might be as uncertain as the fate of Stewart, who returned Friday to NASCAR at Atlanta Motor Speedway despite facing the prospect of criminal charges. Ontario County Sheriff Philip Povero, whose department is reviewing Ward's death with the county's district attorney, said the investigation would continue for at least another two weeks. Povero said in an Aug. 12 news conference there was no evidence of criminal intent at that time but stressed that wasn't indicative of conclusions being drawn.

"A lot of it is going to be determined on is it found as an accident or a criminal charge," Ed Kiernan, president of the New York-based Engine Shop marketing agency that handles sports sponsorships, told USA TODAY Sports. "That's going to weigh in the brands' decisions."

While the investigation is open, Kiernan said it's possible Stewart might be forced to exit the car again.

"The public perception will pressure him to not race, which I think ultimately will be the outcome," Kiernan said. "Until a decision is made whether (Ward's death was) criminal or an accident, I think it's going to be difficult for (Stewart) to (remain) on the track."

In a decision that Stewart-Haas Racing executive vice president Brett Frood said was "100% Tony's," Stewart was behind the wheel Friday for the first time in 20 days. Frood characterized the move as being driven primarily by the "healing process" as the grieving driver surrounded himself with his immediate and adopted family in the garage.

But while the objective might have been helping Stewart reach a better state of mind, the question lingered whether his situation could leave his team in worse shape – particularly as sponsors such as Mobil 1, Bass Pro Shops, Coca-Cola, Chevrolet and Rush Truck Centers measure fan feedback while evaluating their investments that comprise the estimated $20 million needed per car to field a championship-caliber team such as Stewart's.

It also could affect SHR teammates Kevin Harvick, Danica Patrick and Kurt Busch, whose sponsors have engaged in cross-promotions with the team's driver-owner.

"Anytime there's a negative occurrence, and this is huge as a loss of life, you have to look at it from the brands' perspective, and I'm sure they're questioning the validity of moving forward with the partnership," Kiernan said. "You've got public companies that have to answer to boards of directors. Anytime you've got stock prices and things of that nature, public perception certainly sways opinions. The decisions are made corporately a lot of times around just that."

Zak Brown, the chief executive officer and founder of Just Marketing, which has represented sponsors in NASCAR, IndyCar and Formula One, said Stewart's return would have been vetted exhaustively by his sponsors before being approved.

"I can't imagine him being back in if he didn't have support from his partners," Brown told USA TODAY Sports. "He's not going to unilaterally decide I'm getting back in the car.

"I doubt anyone is 100% comfortable because of the whole situation, but they're clearly comfortable enough with him getting back in the race car. For sure, they'll be more alert this weekend than other race weekends. I'm sure there were pretty heavy discussions. These companies are professional. They've thought about everything and have a plan accordingly."

There already have been some signs of sponsors taking a lower profile to mitigate their exposure to harmful publicity while the investigation in upstate New York remains ongoing.

Though its logos have remained on the No. 14, Mobil 1 has pulled its print and TV advertising featuring Stewart since Ward's death. Brown compared it with Dale Earnhardt's former sponsors ceasing in-store displays after the seven-time champion was killed on the final lap of the 2001 Daytona 500.

"They're going to be watching the race this weekend, not for who made what pass on Lap 112, but monitoring what the court of public opinion is," Brown said. "Does it get louder? Quieter? That ultimately will drive the decisions."

Virtually all sponsor contracts in NASCAR have moral turpitude clauses that permit companies to pull their support based on the conduct of a driver or team.

With the investigation still pending, Kiernan said there were "too many unknowns" for any company to pull its support, but that sponsors would be highly attuned to social media over the Labor Day weekend to measure how the public was swayed.

"As more information comes out, more brands will react, and the decisions will be made methodically," he said.

They also could be made in unison. When McLaren was enveloped by a 2007 espionage scandal that involved obtaining confidential data from Formula One rival Ferrari, Brown said the McLaren team's sponsors plotted a course of action together.

"They want to understand what each other is doing and don't want to be caught off guard," Brown said. "They're all in the same boat of protecting their business and brands. They'll be comparing notes so no one is surprised."

Communication between SHR and its sponsors is critical, according to David M. Carter, the USC Sports Business executive director and a contributor to the USA TODAY Sports business website, Fields of Green.

"The last thing (sponsors) want is to be surprised by a headline or a tweet or some other ruling and be sideswiped," Carter told USA TODAY Sports. "(The team) is going to have to be very careful with the messaging publicly and be very diligent about communicating privately. His sponsors need to be the second to know if the race team is the first. The sponsors will appreciate being kept up to speed to come up with their own contingency planning and responses based on the quality of information shared with them."

The examples of Kobe Bryant, Michael Vick and Tiger Woods have demonstrated it's not unusual for high-profile athletes to lose high-dollar endorsement deals because of public firestorms.

But Carter said sponsors in auto racing are conditioned to a different standard than other sports where fatalities aren't as commonplace.

Stewart's sponsors "certainly were devastated" by Ward's death, Carter said, "but it's not that they weren't prepared for it because you have such a high-profile athlete in such a dangerous sport. You have to be ready for the slings and arrows that might come if shareholders or the general public or advocacy groups say, 'How can you support this guy during this timeframe?' "

Carter said consumer brands might be less comfortable maintaining a relationship with Stewart than automotive and racing-oriented companies that "would have more tolerance for sticking with him."

The structure of a company also will factor into how judgments are rendered. Mobil 1's parent company is Exxon Mobil, publicly traded with a market capitalization of more than $400 billion. Bass Pro Shops, which is the main primary sponsor on Stewart's Chevy this weekend, is privately held and owned by Johnny Morris, who has been a fishing buddy of Stewart's.

"With Bass Pro Shops, there's one guy making the decisions," Brown said. "It won't be one person at a public company saying, 'Here's my decision.' With an Exxon Mobil, it'll be, 'What are my communications people telling me? My brand people? My employees? My customers? That will formulate more of a democratic view on how an Exxon Mobil would think vs. a Bass Pro Shops. They still could arrive at the same outcome."

Kiernan said the ultimate outcome will hinge on whether Stewart is cleared of wrongdoing or charged in connection with Ward's death.

"Until that decision is made, there's a cloud of doubt over the entire situation," Kiernan said. "The brands will continue to distance themselves as much as they can until that final decision is made. In this particular instance, public perception will play a big factor."

In the worst-case scenario for Stewart, Carter said the driver's history for being hot tempered (he struck a photographer in 2002 and publicly has feuded with drivers and news media) will become a factor.

"If it's seen as a tragic accident, I don't think the sponsors will see much fallout," Carter said. "But if for some reason he's found culpable, then all of the things he's done over the years seems to add weight to the sponsors who might become uneasy about him.

"How this plays out either will minimize his past performances or bring them back to the forefront again." USA Today