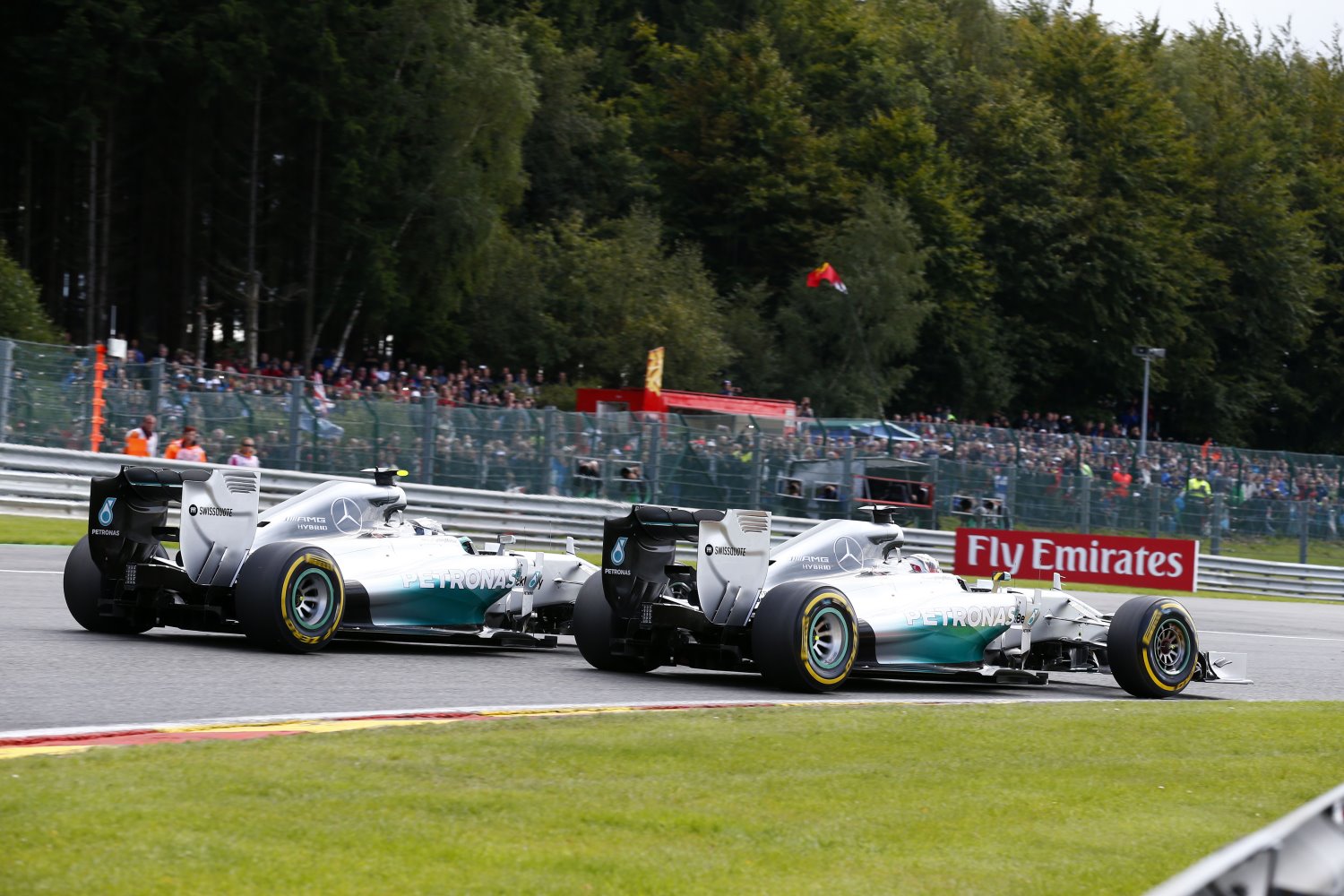 Nico Rosberg will face no further sanction from F1’s stewards "over his crash with Lewis Hamilton in the Belgian Grand Prix," according to Daniel Johnson of the London TELEGRAPH. Both Mercedes F1 Exec Dir Toto Wolff and Rosberg denied Hamilton’s accusation that the German had “deliberately" caused the collision to “prove a point." Sources at the FIA had originally said that "there would only be an investigation if Rosberg admitted causing the accident intentionally, or if Mercedes lodged a complaint." A spokesperson for the FIA confirmed that without any “new evidence" the matter would be laid to rest. The spokesperson said, "The FIA will not intervene in this issue." TELEGRAPH

The BBC reported Hamilton "promised not to retaliate" against Rosberg at the Italian Grand Prix. Hamilton, 29, said, "I will always put the team first and I won't take anything into my own hands." BBC

In London, Kevin Eason wrote Hamilton "has aimed a thinly veiled dig" at Rosberg. Asked whether he could trust Rosberg should they be wheel-to-wheel at the next race at Monza, Hamilton added, “I’ll have to make sure we’re not wheel-to-wheel.

"Hamilton's former teammate, McLaren driver Jenson Button, also joined the debate, "calling for a clean contest between the warring Mercedes team-mates." Button "aligned himself with the man he partnered at McLaren for three seasons, warning that the championship could be decided for the wrong reasons." Button said, "I feel for Lewis. It is a shame it is not a cleaner fight. I have always said that the person who wins the world championship this year is the person who does the best job on the circuit but it does not quite seem that is the way it is at the moment."

Fernando Alonso, "the beneficiary of team orders at Ferrari," believes that "the very public spat is good for the fans, who are relishing the intense contest. … It is difficult. If the team lets the drivers fight and they don’t touch, it is fantastic; when they touch, the team are no good any longer. It is a very narrow line to try to make everyone happy." LONDON TIMES

08/26/14 Mercedes driver Nico Rosberg will not face an investigation into his collision with Lewis Hamilton at Spa on Sunday, despite the English driver's claims that his teammate hit him on purpose.

F1's governing body, the FAI, told the Daily Mail it would "not intervene" in the row unless new evidence came to light. At the time the collision was treated as a "racing incident", and Hamilton's accusation that Rosberg had admitted hitting him on purpose has not changed matters.

The incident on lap two of the race overshadowed a Belgian Grand Prix won by Daniel Ricciardo, of Red Bull, who has sneaked into the title reckoning as the Mercedes drivers take pot shots at each other.

The collision, which came as Rosberg attempted to overtake his team-mate, effectively forced Hamilton out of the race with a puncture, and front wing damage contributed to Rosberg's failure to beat Ricciardo to the checkered flag. Rosberg was later booed on the podium.

There is no longer any doubt that civil war has broken out at Mercedes, and team principle Toto Wolff condemned the incident as unacceptable. He promised that Rosberg would be dealt with internally but it's hard to see what he can do.

The drivers' rivalry has become "unmanageable" says Daniel Johnson of the Daily Telegraph. "How do you control two feuding drivers, apparently prepared to cause damage to the other’s car?" he asks. "It is almost impossible to envisage any return to what you might describe as 'normal' rules of engagement."

Even using team orders will no longer work after Hamilton ignored them in the previous Grand Prix in Hungary, adds Johnson.

But the situation is "gold dust" for the sport says David Coulthard of the BBC.

"This is an emotional roller-coaster. This is man and machine on the edge with high-pressure stakes. And Mercedes are doing a very good job of giving the public exactly what they want."

Hamilton was not to blame for the crash, but although Coulthard says it was Rosberg's fault he does not agree that he crashed on purpose. "I cannot believe for one moment a driver would consciously damage his own car," he says. "Rosberg wanted to prove a point, to be more robust with Hamilton. This was his first opportunity, but he was a bit ham-fisted and got it wrong."

There was sympathy for Hamilton from his former McLaren team-mate Jenson Button who said the Mercedes man had suffered a massive amount of bad luck this season.

"It is a shame it is not a cleaner fight," he added. "I have always said that the person who wins the world championship this year is the person who does the best job on the circuit but it does not quite seem that is the way it is at the moment." Source