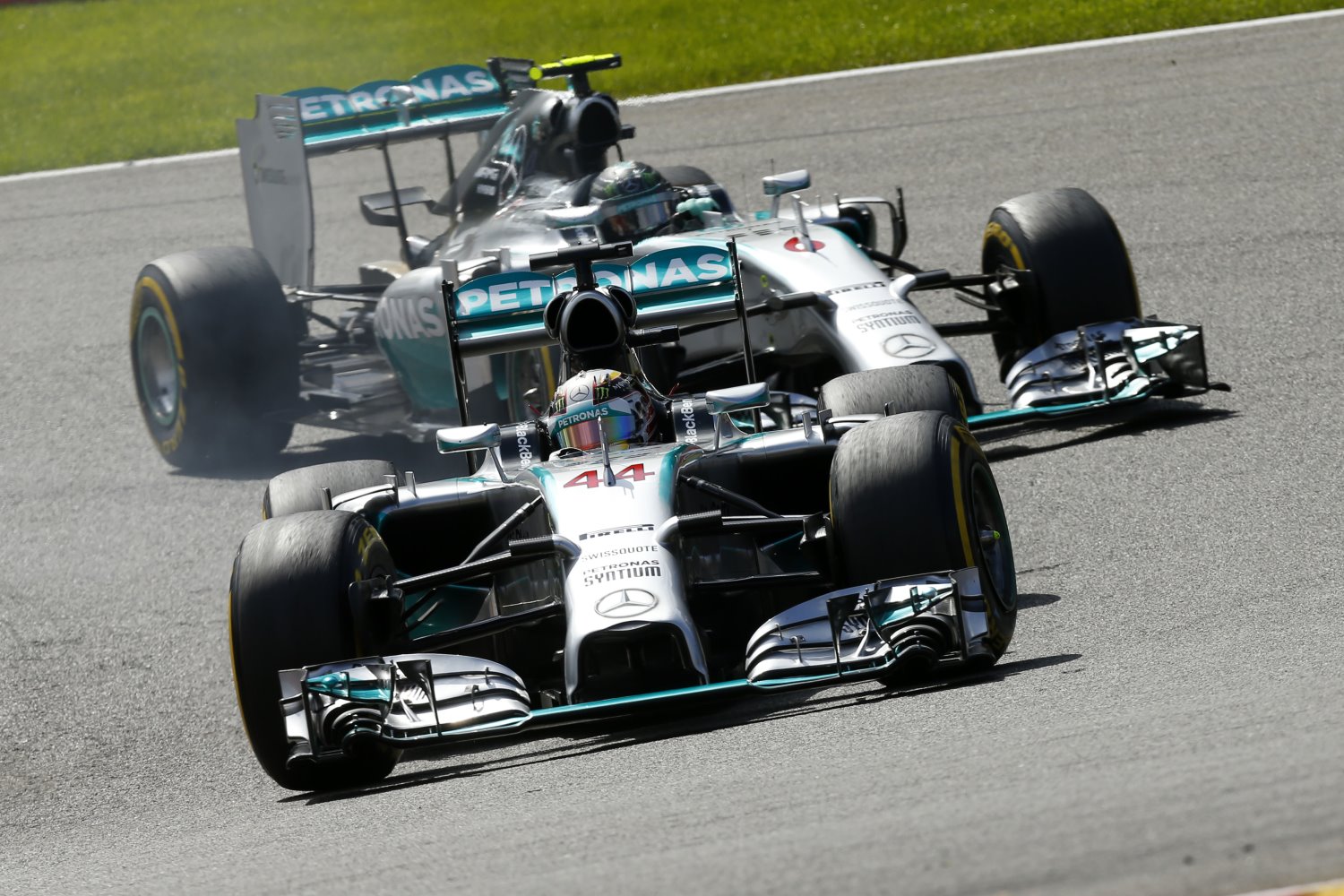 FIA not likely to investigate Rosberg crash
(GMM) The F1 world is split over Nico Rosberg's actions in the Belgian grand prix.

"There was nothing there," British newspapers quote him saying. "There was no move. "It is unbelievable.

"I've always said the person who wins the world championship is the person who does the best job on the circuit, but that does not seem the way it is at the moment," Button added.

"It is a shame it's not a cleaner fight."

But Button also believes Rosberg – in the first championship fight of his career – is probably also grappling with the high "pressure" of that rare occasion.

Former F1 driver David Coulthard, however, says he would not too quickly judge the "sporting integrity" of the 29-year-old.

"You cannot premeditate giving someone a puncture. In my career I probably lost my wing like that 10 times, because you literally cannot see the front of the car," he told the Telegraph.

"The stewards seemed to make the right call, but there should be another avenue or punishment open to them. This is not a normal racing incident."

Coulthard said Rosberg's driving was "clumsy" more than deliberate, but "there was an element of stubbornness to what Nico did".

Coulthard said the crash should also be viewed in light of the highly controversial qualifying incident of Monaco.

"If it happens a third time? We may begin to consider him a driver in the mould of his former teammate Michael Schumacher, who went to astonishing lengths to win," said the Scot.

With a more forgiving assessment is another F1 legend, Gerhard Berger.

"Sure, Nico was to blame," he told the German newspaper Bild.

"But when two drivers of such caliber fight wheel to wheel, something can happen. It's been shown that you can overtake at that corner — this was no suicide move. It was a normal racing incident.

"And whether it happened in the second or the 33rd lap, it doesn't matter — if you feel you can go past, you try. Nico did nothing other than that, and it's what the fans want to see," Berger added.

What does muddy the waters, however, is what Rosberg might have let slip in Mercedes' post-race briefing. Hamilton and team boss Toto Wolff both indicate that Rosberg admitted he maintained his line to prove a "point".

That might tweak the interest of the FIA, who have the power to open an investigation even after the fact.

But former driver and regular F1 steward Derek Warwick told British radio that even though Rosberg's driving was "silly", it is "an internal problem" for Mercedes rather than "a problem for the FIA or the stewards".

And an FIA spokesman told the Daily Mail: "The FIA will not intervene in this issue.

"Only a 'new element' that would have appeared after the results became final could justify us opening an investigation. A comment alleged to have been made in an internal briefing and later denied by the team itself does not constitute such a 'new element'," he official added.

What is clear is that what was left of the tattered relationship between Rosberg and Hamilton is now probably irreparable.

Asked if the pair can be civil for the rest of the 2014 battle, Mercedes team chairman Niki Lauda told Welt newspaper: "When I think of how the meeting went on Sunday, I doubt it.

"But this is precisely the task of the leadership team now — to establish this relationship again."

Whatever the outcome, Bernie Ecclestone is happy.

"What it has done is created a lot of interest," he told the Indian news source PTI. "That is very good for the sport."

When the sport's supremo controversially yet successfully settled with German prosecutors for $100 million, he had at the time also made an offer of $25 million to the aggrieved bank and former F1 shareholder BayernLB.

The offer was turned down because it was not high enough.

But "If the overall package is right, we wouldn't be closed to it," BayernLB chief executive Johannes-Joerg Riegler said last week.

"Perhaps the $25m doesn't match with this settlement structure and perhaps somebody has to think about it because the state prosecutors in Germany got $100m," said the bank spokesman.

"We are not prepared to make a new offer," Sven Thomas, describing the original proposal as "sensible", told Sylt and the Telegraph newspaper.

"BayernLB have rejected the offer, as expected. At the moment we don't do anything. We wait to see what they are going to do.

"If they try to sue, they shall have no chance at all. I don't think they will try to sue," Ecclestone's lawyer added.

Vettel started strong and ahead of team-mate Daniel Ricciardo, however at the finish, it was Ricciardo that won – for the third time this season.

Vettel, in contrast, was more than 50 seconds adrift and will now go to Monza next month, for round 13, still looking for that first win of the year.

"After a great start, Seb was racing with [Valtteri] Bottas, we didn't want to get undercut so we pitted quite aggressively with him to make sure we stayed ahead of him," Horner explained. "Thereafter, however, we seemed to struggle with pace.

"Whether there's some damage with the car or not we really need to look into, but it wasn't Sebastian's fault."

Meanwhile, Horner was full of praise for Ricciardo, who again made his team-mate look rather second class.

"Of all the tracks to win at, Spa was one of the ones that we didn't expect to!" Horner added.

"Daniel drove an incredible race and had good pace throughout; it got very close at the end there with Nico [Rosberg], but he just managed to hold on and have enough in hand to get to the checkered flag first.

"A phenomenal performance to get our 50th win."

Mercedes to 'strengthen focus' on Constructors'
Mercedes boss Toto Wolff has confirmed the team will "strengthen its focus" on securing the Constructors' Championship now in the wake of the Belgian Grand Prix and the collision between Nico Rosberg and Lewis Hamilton.

Mercedes looked poised for another one-two finish in Belgium after locking out the front row of the grid. However, that chance was squandered when Rosberg made contact with Hamilton on the second lap, damaging his front wing, while his team-mate picked up a puncture and later retired.

"We saw our worst case scenario when the drivers made contact on lap two – and that ultimately cost us a one-two finish," Wolff said.

"It has been our clear policy to let the drivers race this year but rule number one is: don't hit each other. To see that kind of contact, so early in the race, is an unacceptable level of risk to be taking out on track. It cannot – and will not – happen again."

"It is clear that we need to strengthen our focus on securing the Constructors' Championship by delivering the potential of both cars in the next races," he added.

Quizzed on if that means Rosberg and Hamilton won't now be allowed to race, Wolff told reporters that the situation will be reviewed.

"We will sit down now with the drivers and ask how they see it," Wolff continued. "We will not say to Nico, 'You messed up', because they are fighting hard and it could have happened the other way around.

"But we must make an example of this incident. We had this conversation at the beginning of the season. It was made absolutely clear that they must not crash into each other. Since then we have had some great battles between our drivers, which were fair and exciting for everyone. At that point they had the situation under control and we had the situation under control.

"Now it has apparently come to a point where we need to ensure they remain within the boundaries we set at the start of the season.

"It is too early to elaborate in detail because the devil lies in the detail. We are all fans, and we owe it to ourselves and everybody out there to let them continue to fight each other. But today that approach has ended in Mercedes losing many, many valuable points. We don't want to end up in Abu Dhabi with a season where we have lost a championship – be it Constructors' or Drivers'.

"We have probably not hit the self-destruct button just yet but there is a lot at stake and if we do not manage this properly now it could all go wrong.

"It is one thing enjoying great races and letting them fight each other hard but you would like a fool at the end of the year if you haven't won anything."

Alonso qualified on the second row at Spa-Francorchamps, but picked up a five-second stop/go penalty for his first stop as his mechanics were still working on his car after the signal to clear the grid. He eventually finished seventh.

"We could have delivered more as a team at the weekend," Fry commented.

"Clearly, Fernando's penalty, because of a problem with the charge from the external battery we use on the grid, cost him the chance of fighting for a place on the podium and from this incident we must learn to improve our procedures," he added.

Ferrari team boss Marco Mattiacci agreed that the issue had probably cost them a podium, as did Alonso.

"Unfortunately, Fernando's race was compromised by a problem at the start. Without that, I firmly believe the podium was within his reach. We know we have missed out on a great opportunity," Mattiacci continued.

"But we will learn from this incident to pay obsessive attention to our procedures, as we strive to improve reliability."