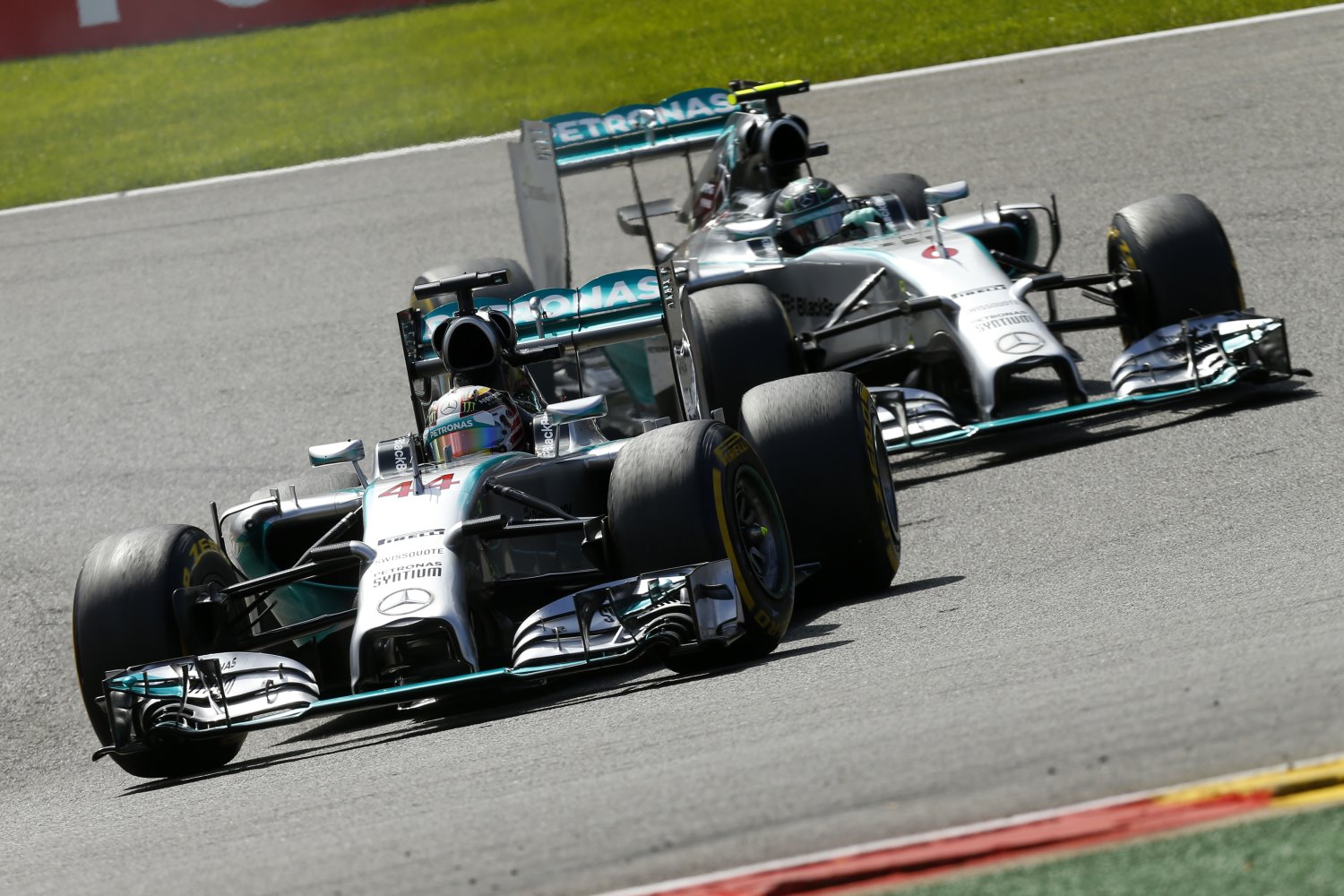 Mercedes rethinking team orders after Belgium clash
(GMM) The fallout of Sunday's explosive clash between warring teammates Lewis Hamilton and Nico Rosberg is only just beginning to hit the ground.

Although Kevin Magnussen was penalized by the stewards for his wheel-to-wheel behavior at Spa, German Rosberg escaped even an FIA investigation after driving into the rear tire of Hamilton's sister Mercedes.

"The stewards' job is to make the fight for the title fair," Brazilian journalist Livio Oricchio wrote in Universo, "but in this case they inexplicably failed to act."

Rosberg, booed in the podium and slammed by his bosses, refused to apologize.

"A real champion would do this and say afterwards 'I screwed up'," 1997 world champion Jacques Villeneuve told the German newspaper Bild.

"Emotions have not cooled," he admitted to Austrian television ORF. "(The emotions are) very hot and very high.

"In the heat of battle sometimes things are said that are a bit hard," added Wolff, giving a hint of the flavor of the late afternoon summit.

Hamilton was much more publicly forthcoming.

He even spoke about a pre-Belgian GP meeting on Thursday, during which Rosberg made clear "how angry he was" about the team orders shenanigans of Hungary.

"I was thinking 'It's been three weeks you've been lingering?' He sat there and said how angry he was at Toto and Paddy (Lowe)," said Hamilton.

"After that, and this, it's interesting," said the 2008 world champion.

Hamilton then made the explosive revelation that, in the post-clash meeting late on Sunday, Rosberg admitted Sunday's incident had been "on purpose".

"He (Rosberg) said he could have avoided it," Hamilton claimed. "He said 'I did it to prove a point'.

"I was gobsmacked. You need to ask him what point he was trying to make."

Wolff, albeit obviously furious with Rosberg, said the suggestion the German crashed into Hamilton deliberately was "nonsense".

But he confirmed: "Nico felt he needed to hold his line. He needed to make a point."

The fact Rosberg's conscious actions resulted in contact might now attract the attention of the governing FIA, who have the power to open investigations even long after the fact.

Team chairman Niki Lauda's blunt assessment was that the collision was "avoidable" — a conclusion that should in theory be punished by the stewards.

"Keep the steering wheel to the left," the triple world champion added, "go a bit over the curb and nothing happens. But he pulled to the right at the wrong moment."

That is despite a spokesperson for the Paris federation as insisting that, as far as the FIA is concerned, "It's over".

But it's far from over for Mercedes. First, the Brackley based team could punish Rosberg.

"Lewis said it's going to be a slap on the wrist and there is no consequence," Wolff said. "But today we have seen the limits of slaps on the wrists."

But an even bigger consequence is the re-think in Mercedes' policy of letting the drivers race freely.

"Unfortunately yes," Wolff admitted when asked if the team is thinking about altering that policy in light of what happened in Belgium.

"We haven't decided that yet, we will in the next few days but I am extremely upset — I feel let down and the team has been let down. We have defined rules and we have broken those rules.

"We are all fans and we owe it to everyone out there to let them race but today that philosophy has ended with Mercedes losing many valuable points and we don't want to end up in Abu Dhabi losing a title because we are race fans.

"What's the point of great races and great fights if at the end we look like idiots?

"We hate the words team orders," he added, "but that is now up for discussion.

"We believed both of them understood but now this has happened and we need a new system," said Wolff.

"This cannot – and will not – happen again."

Lauda has been the loudest voice arguing against team orders at Mercedes, and even he is now quoted by Auto Motor und Sport as saying: "I think we can keep this policy, but I can't promise anything.

"Our policy is that our drivers know what they are doing, but a collision in the second lap shows that this is not the case."

This year defending his fourth consecutive drivers' title, the German has notably struggled in 2014 alongside new teammate Daniel Ricciardo.

Australian Ricciardo drove through the Mercedes shenanigans on Sunday to win his second consecutive race — his third of the season and his career.

In contrast, and earning many multiples more millions, Vettel has yet to break through this season, and at the drivers' circuit Spa-Francorchamps he finished fifth and almost a minute behind the sister car.

Vettel complained afterwards of a probable car defect, telling German reporters he felt he had been sent into "war with a wooden stick".

But that is not necessarily why Vettel's race engineer Guillaume Roquelin, known affectionately as 'Rocky', will no longer be in that role with the 27-year-old in 2015.

"These are restructuring measures to improve the team," Dr Helmut Marko told German television Sky at Spa, responding to the reports about 'Rocky' that emerged on Sunday.

Team technical boss Adrian Newey is stepping back after Christmas, but Red Bull will not directly replace him.

"I think that at the track in Paul Monaghan, 'Rocky' and Simon (Rennie) we have three very able technical people and I see no reason why they shouldn't be able to take those decisions," Newey had said earlier in Belgium.

Germany's Welt newspaper claims the promoted 'Rocky' will be replaced at Vettel's side by Gianpiero Lambiase, currently Sergio Perez's engineer at Force India.

Marko said: "Sebastian knows who is coming — he was involved in the talks."

Meanwhile, despite being nominated by DTM driver Timo Glock for the now-famous 'ice bucket challenge', Vettel has turned it down.

"I think I'll skip the shower and just give a donation," he is quoted by the Swiss newspaper Blick.

According to the Finnish broadcaster MTV3, the German marque BMW has announced that the Finn will test a 2014-spec M4 during this week's Lausitzring test.

Former Renault and McLaren driver Kovalainen, 32, lost his Caterham seat at the end of 2012 and his last two grands prix were at the end of last season for Lotus, replacing his injured Finnish countryman Kimi Raikkonen.

BMW said Kovalainen "will use the opportunity at the Lausitzring to gain an impression of the BMW M4 DTM".

Ricciardo declares title hunt now on
(GMM) Daniel Ricciardo has declared himself in the hunt for the 2014 world championship.

Before the title war between Mercedes teammates Lewis Hamilton and Nico Rosberg exploded in Belgium, no one would have bet against a dominant victory for one or the other of the silver-clad duo.

But as their personal battle spilled into on-track carnage at Spa-Francorchamps, Red Bull's surprise newcomer Ricciardo grinned through the melee to secure his second consecutive race victory.

It was the Australian's third win of the season and his career, and a look at the drivers' standings shows he is now only 35 points behind Hamilton for second.

"The fact that Daniel only has one win less than Nico is really remarkable," said team boss Christian Horner.

Closing down the 64 point gap to championship leader Rosberg is more unlikely, but it cannot be forgotten that the winner of November's Abu Dhabi finale will secure no fewer than 50 points.

It is enough of a concern for Mercedes that, after Sunday's clash, the dominant Brackley based team is rethinking its policy on standing team orders.

As was expected, Mercedes' engine advantage shone through on the long stretches at Spa-Francorchamps, but Red Bull's Renault-powered car also looked quick in a straight line on Sunday.

"I guess on TV you could see that the rear wing was pretty simple, there wasn't much to it," said Ricciardo, "but obviously it was a good package here and we'll see if the Monza wing can get any smaller!

"Monza we know will be tricky again but obviously the package we brought here was pretty racy, and then I think Singapore and Suzuka will be pretty good for us," he added.

Ricciardo acknowledged that winning the championship is a long shot, but he insisted he will keep pushing anyway.

The added bonus for Ricciardo is that he has achieved his success alongside none other than reigning quadruple world champion Sebastian Vettel, and his demeanor on Sunday indicated he is yet to feel the weight of the growing pressure.

"I'm enjoying it more than ever," he said. "Each race that goes on I'm having more and more fun.

"The in-team battle has, let's say, gone really well. I think the team has been really pleased and I've been pleased so we're in a good place."

German television commentator and former driver Marc Surer echoes Ricciardo's claim that the title cannot be ruled out, but he also acknowledged that overcoming the might of Mercedes' dominance is unlikely.

"That would be amazing," he said, "and I almost can't imagine it.

"Of course, if it carries on like this and looking at the (double) points situation for the final race, then it is possible. But I don't think so.

"There will be races again where Mercedes will clearly dominate, driving all alone at the front of the field," added Surer.

Magnussen penalized for Alonso move
Formula 1 rookie Kevin Magnussen has been given a 20-second time penalty after his fierce battle with Fernando Alonso at the Belgian Grand Prix, dropping him to 12th and outside of the points-paying positions.

But Magnussen was deemed to have forced Alonso off the track on the Kemmel straight as the pair scrapped.

"The driver of car 20 was defending his position on the straight between turns 4 and 5, a significant portion of car 14 was alongside car 20. The driver of car 20 did not leave enough space for car 14 and forced the car off the track," explained a statement issued by the stewarding panel, which this weekend includes Emanuele Pirro.

In addition, two penalty points have been applied to Magnussen's license, increasing his total to four.

Rosberg inflicted a left-rear puncture on Hamilton on the second lap of Sunday's race, when the duo were fighting for the lead at Les Combes.

Rosberg went on to finish second and extend his championship lead to 29 points, while Hamilton ultimately retired with damage relating to the clash.

"I am confident that we can keep it. It is always going to be an intense battle. There will always be difficult moments," said Rosberg.

"But after Hungary we had a discussion. We will discuss this again today, review it and move on."

Rosberg, who received boos on the podium, admitted that the outcome was upsetting for the team.

"I am very disappointed from a team perspective because we could have done a lot better than finishing in second place as our car was really, really special this weekend," the German went on to explain.