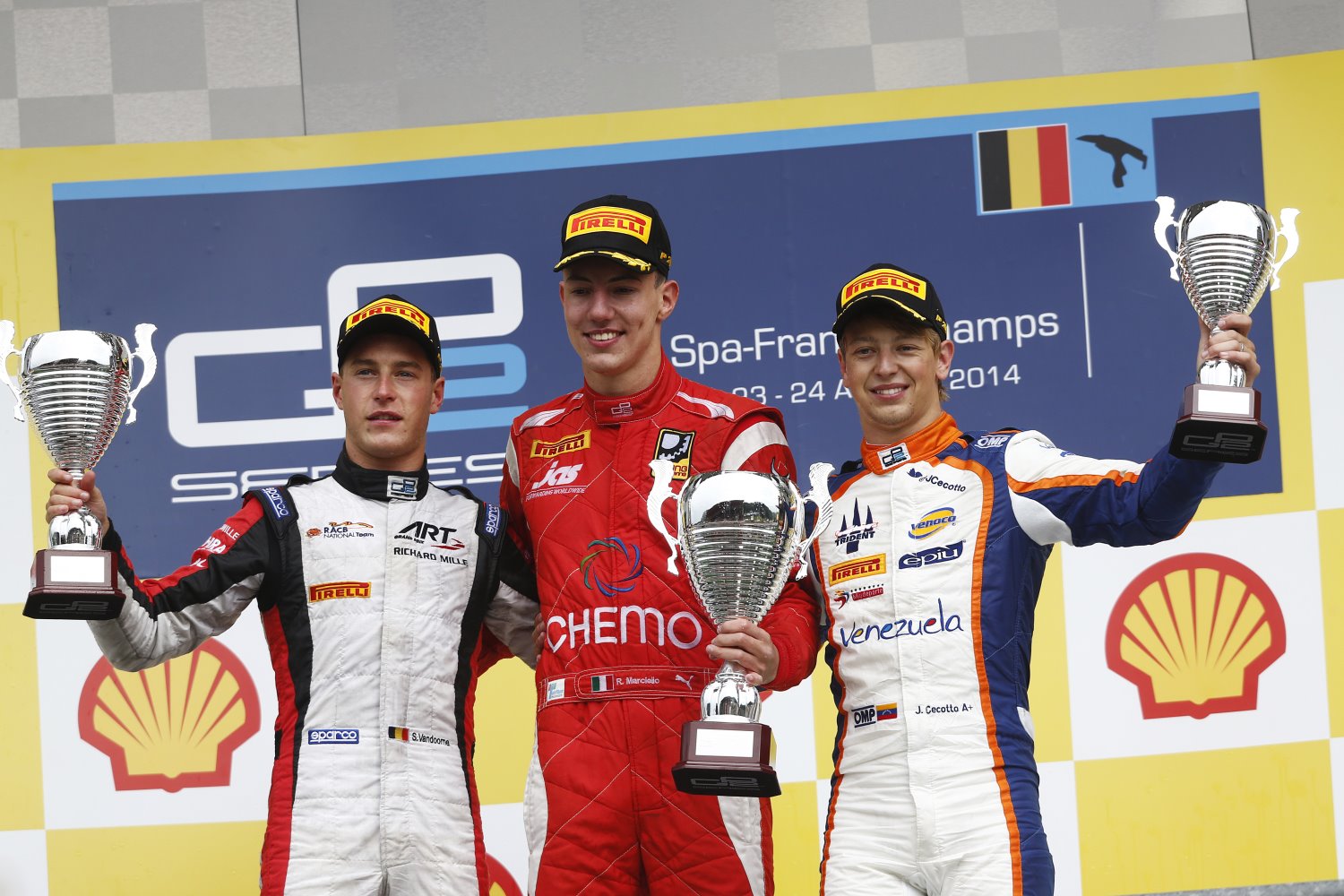 Raffaele Marciello has claimed a long overdue debut win in sodden conditions in today’s feature race at Spa-Francorchamps, with the Ferrari Academy driver surviving the oppressive conditions and overtaking local man Stoffel Vandoorne late in the race for the win, with a distant Johnny Cecotto rounding out the podium.

The McLaren test driver started his home race from pole position, with Series leader Jolyon Palmer alongside him, and with the rain starting as the lights came on Vandoorne used his local experience to easily lead the grid towards La Source: Palmer spun his wheels and dropped backwards, with Marciello running wide at the corner and allowing Mitch Evans and Johnny Cecotto through.

The downpour (and Conor Daly’s stopped car) saw the safety car come out next time round, which still didn’t stop Evans spinning back a few spots. Sanity prevailed and the race was red flagged soon after, with the race getting restarted behind the safety car 15 minutes later, with Vandoorne leading from Cecotto, Marciello, Nathanael Berthon, Felipe Nasr, Evans, Simon Trummer and Palmer.

The race went live on lap five, with Cecotto sneaking through into the lead at La Source but running wide at Les Combes, handing the position back to Vandoorne at his team’s instruction a few corners later. Behind them Nasr moved up a spot at the Bus Stop next time through, and the Venezuelan soon had his mirrors full of red: Marciello blew past at Les Combes a few laps later and was chasing Vandoorne soon after.

The top two were in a race of their own as they exchanged fastest laps, while behind them Berthon and Trummer came together out of Les Combes and fell back down the order. It was clear that the leaders were hoping the track would dry enough for slicks, but when Palmer came in on lap 14 he re-emerged with wets, with most of his rivals repeating his actions shortly after.

Back at the front Vandoorne pitted on lap 17, followed by Cecotto, while Marciello stayed out for two quick laps before coming in, re-emerging right on his rivals rear wing just as Evans squeezed by Palmer behind them: the Italian clearly had better grip than the Belgian, pushing him hard all around the circuit before finally slicing inside Vandoorne at Rivage for the lead with 3 laps to go.

Marciello eased away from his rival to cross the line 2 seconds ahead of Vandoorne as the checkered flag dropped to claim his maiden GP2 win, with Cecotto a lonely third behind them, 4 seconds ahead of Nasr. Evans was easily fifth ahead of Palmer, who just held off an impressive Artem Markelov who picked up his first points with a strong drive all race for P7 ahead of Daniel Abt, who claimed tomorrow’s reverse pole from André Negrao on the penultimate lap, and Daniel de Jong, who picked up the last point on the last lap from Adrian Quaife-Hobbs.

Palmer’s Series lead has shortened a little, heading Nasr by 200 points to 161, with Vandoorne on 131 points ahead of Cecotto on 115, Evans on 102 and Stefano Coletti on 96 ahead of tomorrow’s sprint race.