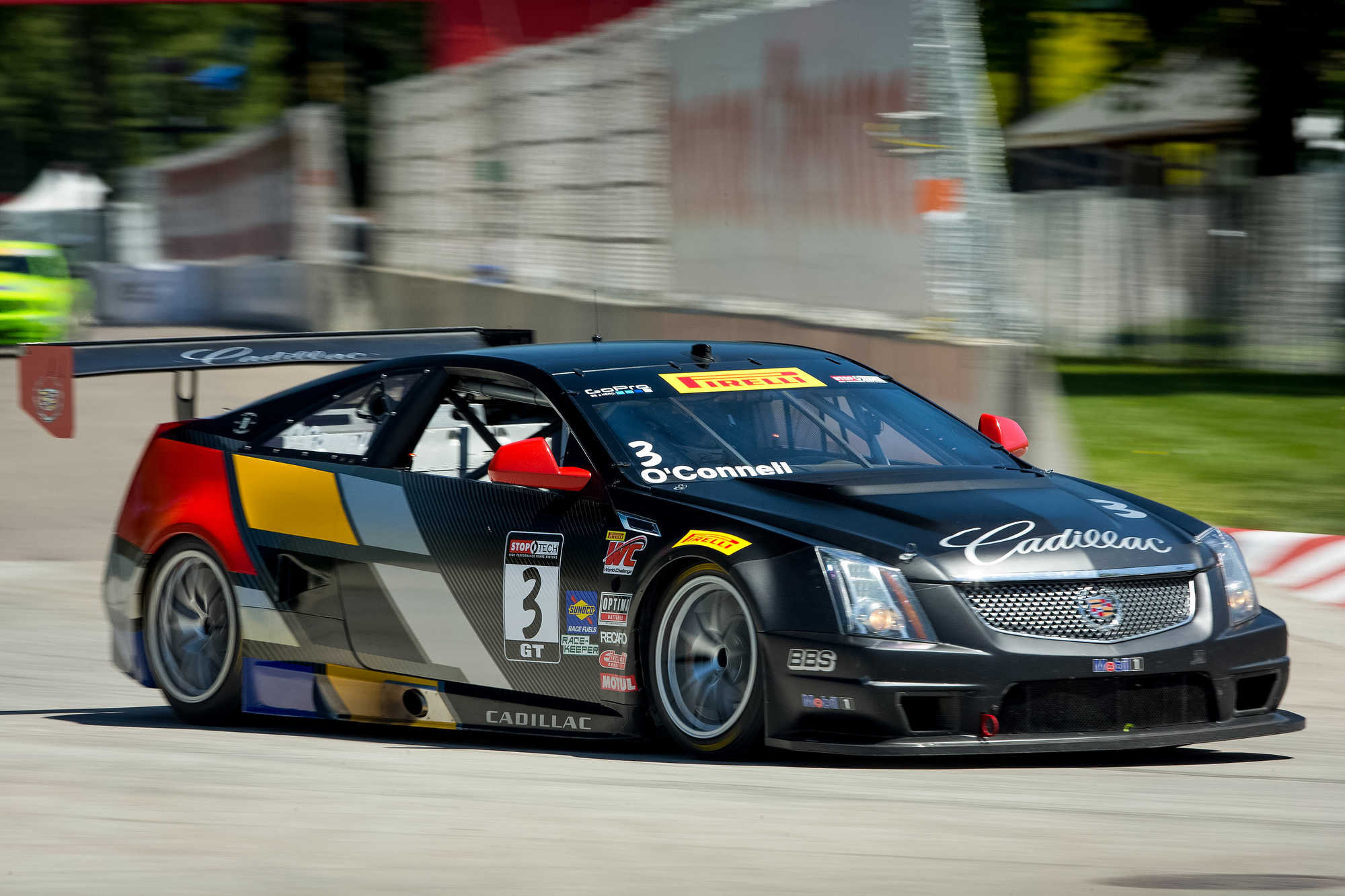 SONOMA, CALIF. – The Pirelli World Challenge heads towards the conclusion of its 25th Anniversary season with the penultimate round of 2014, the Cadillac Grand Prix of Sonoma. The GT, GT-A and GTS divisions will race Rounds 13 and 14 of the year, a pair of 50-minute sprints, at Sonoma Raceway, a 1.99-mile permanent road course.

More than 40 entries are set to compete at Sonoma, the series' second trip to California this year; the series raced Round 2 in Long Beach in April. Several drivers have home turf or wins to defend in the Golden State, as championship battles intensify in all classes.

The GT title battle is intense between points leader and two-time defending champion, Johnny O'Connell, of Flowery Branch, Ga., in the No. 3 Cadillac Racing Cadillac CTS-V.R and Mike Skeen, of Charlotte, N.C., in the No. 2 Hawk Performance Audi R8 Ultra.

O'Connell leads Skeen by 82 points (1228 to 1146) heading into the two-race Sonoma weekend. Both drivers seek to bounce back after challenging Sonoma races in 2013; O'Connell was taken out on the first lap and Skeen was issued a post-race penalty that dropped him, like O'Connell, outside the top 10 in the race.

If either of these two falters there are three drivers within striking distance who could put themselves into title contention this weekend. Among them is O'Connell's teammate Andy Pilgrim, of Boca Raton, Fla., in the sister No. 8 Cadillac Racing Cadillac CTS-V.R, and the defending Sonoma race winner.

Pilgrim sits fifth, just nine points behind Anthony Lazzaro, of Atlanta, Ga., in the No. 61 R. Ferri Motorsports Ferrari 458 Italia GT3 and Andrew Palmer, of Chicago, in the No. 21 GMG Racing Audi R8 Ultra. Both Lazzaro and Palmer have a win apiece this year as they split the two-race Barber weekend on another permanent road course.

The driver entering the weekend with the most momentum is Ryan Dalziel, of Winter Park, Fla., who swept the Mid-Ohio weekend in the No. 31 EFFORT Racing Porsche GT3 R. Dalziel, who is not in the championship picture, could play spoiler this weekend.

RealTime Racing brings its new Acura to Honda Performance Development's home state for the first time, with seven-time Pirelli World Challenge champion Peter Cunningham, of Milwaukee, Wis., driving the No. 42 Acura/RealTime Racing Acura TLX-GT. Cunningham and the team enjoyed a successful debut weekend at Mid-Ohio and look to break into the top-10 in Sonoma, several hours north of HPD's U.S. base in Torrance.

California natives James Sofronas, of Villa Park, Calif., in the No. 14 Spyder/The Thermal Club Audi R8 Ultra and Mike Hedlund, of Woodside, Calif. in the No. 77 Scuderia Corsa Ferrari 458 Italia GT3 seek big results in their home state. Sofronas looks to continue his run of consistent finishes, having scored a top-10 result in each of the first 12 races this season. Hedlund returns for the first time since Long Beach in April; the Scuderia Corsa team makes its first Pirelli World Challenge start.

TRG-AMR also has its home race this weekend in Sonoma, as part of a banner weekend for Kevin Buckler's TRG-AMR operation – both it and Buckler's Adobe Road Winery are based in nearby Petaluma. Rising young sports car star Christina Nielsen, of Horsholm, Denmark, will make her series debut in the No. 00 Passtime USA Aston Martin GT3.

Dyson Racing Team Bentley steps up to a two-car effort for the first time. Butch Leitzinger, of State College, Pa., in the No. 08 Bentley/Breitling/Mobil 1 Bentley Continental GT3 continues as he has since Road America. Longtime Dyson Racing driver Guy Smith, of Beverley, U.K., will drive alongside in the sister No. 88 Bentley/Breitling/Mobil 1 Bentley Continental GT3.

Michael Mills, of Angleton, Texas, took over the GT-A points lead with a double win at Mid-Ohio in the No. 41 EFFORT Racing Porsche GT3 R. Mills, who also won Round 10 in Toronto, seeks to extend his three-race win streak this weekend.

Seeking to catch him in Sonoma are Henrik Hedman, of Ft. Lauderdale, Fla., in the No. 10 DragonSpeed Ferrari 458 Italia GT3 and Dan Knox, of Pilot Point, Texas, in the No. 80 ACS Manufacturing, Inc./Performance SpeedTech Dodge Viper SRT GT3-R. Hedman and Knox are 27 and 34 points back respectively of Mills entering the two-race weekend.

Kia Racing/Kinetic Motorsports has an important weekend; it's back in the home state where the manufacturer's corporate headquarters are based (Orange County, in Irvine). Nic Jonsson, of Buford, Ga., in the No. 36 DonorsChoose.org Kia Optima and teammate Mark Wilkins, of Toronto, in the No. 38 PutOnTheBrakes.org Kia Optima finished 1-3 in Long Beach earlier this year. Wilkins and Jonsson enter the weekend 1-2 in GTS points, and seek to defend their lead in both the driver and manufacturer championships in Northern California.

Defending class champion Lawson Aschenbach, of Palm Beach Gardens, Fla., in the No. 1 Blackdog Speed Shop Chevrolet Camaro has an outside title chance thanks to securing maximum points in the Mid-Ohio weekend, with two victories from pole. Although he's 164 points behind Wilkins, further wins and trouble for the Kias could bring him back into title contention.

Dean Martin, of Westland, Mich., in the No. 50 Picture Cars East/Rehagen Racing Ford Mustang Boss 302S, also could enter the title picture with a big weekend in Sonoma. The three-time 2014 winner sits fourth in points and like Aschenbach, could capitalize if the Kias falter.

A pair of Jacks completes the top six in GTS points. Jack Baldwin, of Marietta, Ga., in the No. 73 RESET-MD Porsche Cayman S sits fifth and looks for his first podium finish since Round 5 in Detroit; in sixth, Jack Roush Jr., of Livonia, Mich., in the No. 60 ROUSH Road Racing Ford Mustang Boss 302R seeks his first series win.

Only 111 points separate seventh through 10th in GTS points. Young guns Andy Lee, of Colorado Springs, Col., in the No. 20 Crown Seven/BestIT Chevrolet Camaro and Alec Udell, of The Woodlands, Texas, in the No. 17 Watson Racing/MDG Ford Mustang Boss 302S have had several podiums and look for wins; veterans Tony Gaples, of Libertyville, Ill., in the No. 11 Blackdog Speed Shop Chevrolet Camaro and Nick Esayian, of San Diego, Calif. in the No. 34 Natural Cures Aston Martin GT4 have been consistent top-10 finishers. Esayian is part of a banner weekend for TRG-AMR; the team has five GTS cars entered plus Buckler's GT3-spec Aston Martin GT3 in GT. The team won in GTS a year ago with Brandon Davis.

Ric Bushey, of Virginia Beach, Va., seeks a bounce back weekend in the No. 51

Nissan/Motul/SPL/OSGiken/Sparco/Sunoco Nissan 370Z after a challenging Mid-Ohio. He enters the weekend 11th in points, one spot ahead of Buz McCall, of Boca Raton, Fla. in the No. 72 RESET-MD Porsche Cayman S.

Additional season-long entrants Geoff Reeves, of Columbus, Ohio in the No. 40 Shadow Works/BestIT Chevrolet Camaro and Brian Kleeman, of Baltimore, Md. in the No. 07 Nissan/DXD Clutches/Aeromotions Nissan 370Z round out the expected 22-car GTS field.