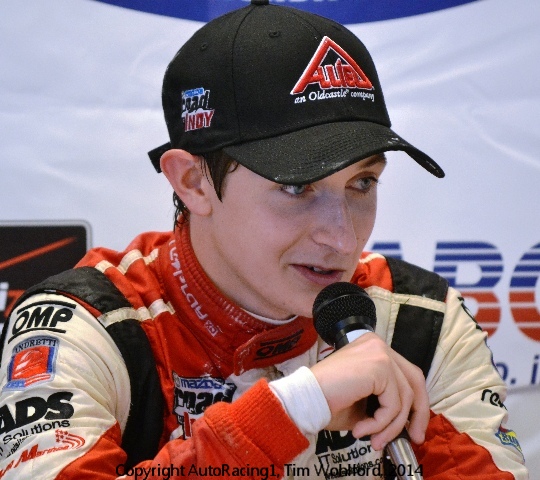 An enthralling battle for this year's Indy Lights Presented by Cooper Tires title honors tightened considerably as a result of an opportunistic victory in today's Milwaukee Mile 100 by Zach Veach. The 19-year-old from Stockdale, Ohio seemed set to finish second to Andretti Autosport teammate Matthew Brabham, who passed him for the lead on Lap 40 and edged clear, only for Veach to be handed a lifeline when Brazilian rookie Luiz Razia crashed out of fourth place with eight laps remaining.

Veach, who started from the pole in the #26 RePLAY XD/The Young Marines/Ads IT Solutions/ Zakosi Data Back Up Dallara and led comfortably in the early stages, knew full well the restart would provide his best and perhaps only opportunity to redress the balance. He grasped it with both hands. When Brabham defended to the inside on the entry to Turn One at the restart with just four laps remaining, Veach stuck to his guns, rode around the outside and completed the pass on the exit of Turn Two leading onto the back straightaway. The pass earned Veach the RePlay XD Move of the race.

The maneuver held huge championship implications. Without it, Veach would have trailed series leader Gabby Chaves – who finished third for Belardi Auto Racing – by 17 points with just two races remaining. By completing the pass and securing his third win of the season – and first since Barber Motorsports Park in April – Veach has now moved within seven points (466-459) going into the final double-header on the road course at Sonoma Raceway in California.

The two Andretti cars were effectively in a race of their own as series leader Chaves struggled with a general lack of grip. The Colombian-American withstood pressure from Razia virtually throughout the 100-lap race until Razia abruptly lost control and crashed in Turn Two.

Rookie Scott Anderson, who had been closing on the pair, profited from Razia's misfortune to earn his best finish thus far, fourth, for Fan Force United, while the other title hopeful, Englishman Jack Harvey, was close behind in fifth for Schmidt Peterson Motorsports with Curb-Agajanian. Harvey lies third in the championship on 443 points.

The Team Championship also is finely poised with a 1-2 finish hauling Andretti Autosport to within nine points of SPM with Curb-Agajanian, 332-223. Belardi Auto Racing also remains in contention on 309 points.

Contingency awards included a customized Race Energy BCM21 charger – the official battery of the ladder series – to the winning team of Andretti Autosport.

Zach Veach #26 RePLAY XD/The Young Marines/Ads IT Solutions/ Zakosi Data Back Up: "My engineer told me we need those points so push and I was just trying to get the best result I could. I think I jumped Matt a little bit and he got a little worried and protected the inside. I got lucky to drive around the outside. I just pushed as hard as I could and I am just so happy to have the RePlay XD car in victory lane here. [On taking the lead] Getting it is one thing and keeping it is another and we did just that. We are in the championship chase and we are going to be fighting hard to take it home in Sonoma."

Matthew Brabham, #83 United Fiber & Data/MAZDASPEED: "Just disappointed, really. I wanted to win the race. I am not in a position to win the championship, so I am just out there to win. I had an eight-second lead and things were looking really good. With only a few laps to go the yellow came out and I knew I still had a strong car. It was just a matter of getting off the restart. I managed to get snookered on the restart and finished second. I am happy we were at the front and ran a good race but I am disappointed we didn't win."

Gabby Chaves, #5 Marca Colombia/Coldeportes: "It was definitely not our most competitive race but even with that we are still on the podium so I can't complain. I am a little disappointed that we lost a decent bit in the points, but there are still two races and that doesn't change our mindset. We are going to go out there and try to win both races. That's our goal. We are happy where we are, we have the championship lead still and we are just going to out there and have fun and do our best. That's all we can do."

Below are the full results: