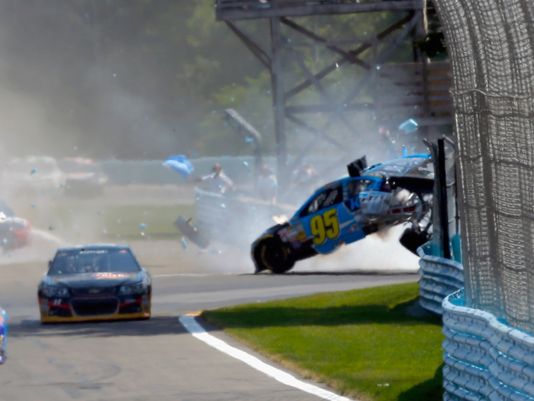 Drivers weren't in agreement as to what sorts of barriers might be preferable. Watkins Glen has made a number of safety enhancements in recent years, and NASCAR vice president of competition Robin Pemberton indicated the process is under constant review. "It's a constant improvement process," Pemberton said during a televised interview with ESPN during a red-flag period that lasted more than an hour while track workers repaired the Armco barriers.

"And as you know, many of the places we go to, the facilities, are multi-purpose, and we're only here one weekend a year-and it's busy throughout the rest of the year. Watkins Glen has made great advancements. You remember Turn 1 and 2 and all that, moved grandstands and fencing and SAFER barriers, and that's worked quite well for us. But not all places are places for SAFER barriers. There are different types of systems to help slow cars down." NASCAR Wire Service

08/11/14 A serious crash occurred on lap 56. Ryan Newman hit the Armco barrier – a guard-rail instead of a concrete wall and SAFER barrier – and bounced off it back into traffic. He was pummeled by Michael McDowell, whose car went airborne and flew backward into a barrier on the outside of the racing surface, destroying it and sending debris flying. That caused two lengthy delays – totaling one hour and 21 minutes – to fix the fence. It also raised questions about the safety standards at Watkins Glen. "It's just a very antiquated racetrack and the safety is not at all up to NASCAR's standards," Newman said. "It's a shame that we have to have accidents like that to prove it."