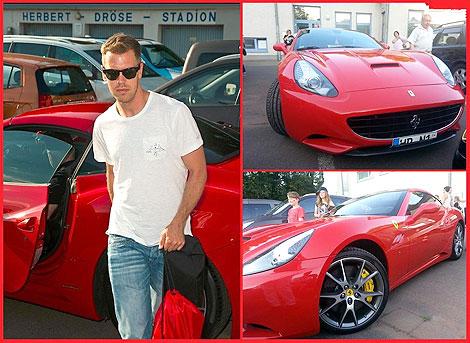 F1 pushing on with Russia GP plans
(GMM) Russia and formula one are pushing ahead with preparations for the country's inaugural grand prix.

There have been doubts about the viability of the Sochi race in recent weeks, particularly after the MH17 disaster.

But Russia's Championat claims that preparations for the Russian grand prix, scheduled for mid October, are ongoing.

The latest development is that officials of FOM – the Bernie Ecclestone-led Formula One Management – visited the site to inspect the television compound, media and commentator facilities, and the actual circuit paddock.

"Particular attention was paid to pedestrian bridges, locations for cameras, as well as the use of digital flags," the report said, citing official sources.

Championat added that the final inspection of the Sochi circuit, located around the site of the 2014 winter Olympics village, will be carried out by the FIA in the second part of August.

Sauber team boss Monisha Kaltenborn said that despite the political situation, the teams are currently committed to racing in October.

"We have to rely on the governing body and commercial rights holder," she said.

"They are the ones who have the responsibility and we will do as they say, like we've done in the past."

At grands prix, 27-year-old Vettel commutes to and from the circuits in a road car supplied by Red Bull's title sponsor Infiniti.

But for a gift to his father Norbert, Vettel chose the iconic color red and the personalized number plate HP N1 — 'HP' representing his birthplace Heppenheim, and 'N1' for Norbert.

"A sign of a future at Maranello? Who knows!" read the Gazzetta report.

"In 1995, Michael Schumacher was seen roaming the streets of Monaco at the wheel of a F355. And we know how that turned out."

Schu medical records suspect was German – report
(GMM) The suspect accused of attempting to sell Michael Schumacher's medical records was from Germany, according to the latest reports.

Last week, the tragic news emerged that the unidentified man committed suicide after being detained in a Swiss jail.

Now, the first details about his identity emerge.

According to Schweiz am Sonntag newspaper, he was an administration chief at the Swiss helicopter rescue company that was responsible for Schumacher's transfer from intensive care in Grenoble to a Swiss rehabilitation clinic.

The man was reportedly a 54-year-old German who lived quietly with his girlfriend in the Swiss canton of St Gallen.

A long-time friend, who said he went sailing with the "trustworthy" German only six weeks ago, reportedly said he was someone who "never spoke about money worries".

"He was as he always was," the friend added. "I never would have thought he was capable of something like that."

Meanwhile, the major German newspaper Bild claims Schumacher's wife Corinna will be a patron of the forthcoming World Equestrian Games in France.

The German marque's initial energy recovery-boosted turbo 'power unit' design has utterly dominated so far in 2014, with all four Mercedes-powered teams within the top 6 places in the constructors' world championship.

But amid the so-called engine development 'freeze', manufacturers will nonetheless be able to make substantial modifications – up to 48 per cent of the entire 'power unit' layout – for next year.

Asked if he thinks that means the Mercedes will simply be 'copied' by its rivals, Force India's chief operating officer admitted: "Yes.

"I don't understand the strategic direction of the other power units, but I'm sure that in formula one everyone looks at what everyone else is doing, and if they believe there is something they've missed, which they now know — that just how our industry works," Szafnauer told F1's official website.

However, he said it is too simplistic to say F1 has become a pure 'engine formula'.

"To win you have to get it all right," said Szafnauer. "Look at Mercedes — I believe that their car would still be good enough to win even with Renault or Ferrari power.

"Is it more of an engine formula this year? Maybe a bit more than in the past when the engines were all frozen," he acknowledged. "But is it a complete engine formula? No way."

Before he ended his corruption trial in Munich by agreeing to pay $100 million to the Bavarian state, it emerged that the 'F1 supremo' was also willing to compensate the state-controlled bank BayernLB to the tune of EUR 25 million.

It was reported that the compensation offer to the bank, a former shareholder of F1's commercial rights, was valid only until last Friday.

One of Ecclestone's lawyers said at the time that the EUR 25 million offer was not an admission of guilt, nor compensation for any alleged damage done to BayernLB through the disputed $44 million payment to jailed Gerhard Gribkowsky.

But as the deadline expired, the German news agency DPA reported that BayernLB had rejected the offer.

It is believed BayernLB turned it down on the basis that it paid Ecclestone a consultation fee of no less than $41 million after the rights sale.

And earlier, the bank was seeking a whopping $400 million in damages due to Ecclestone and Gribkowsky's alleged undervaluing of the shares.

A spokesman for BayernLB confirmed DPA's report about the rejection of the offer.

Focus Shifts Back To Future Of F1 After End Of Bernie Ecclestone Bribery Trial
F1 CEO Bernie Ecclestone emerged from a Munich courtroom $100M poorer "but a free man," according to Robinson & Ross of the FINANCIAL TIMES.

The 83-year-old billionaire "stood accused of bribing BayernLB banker Gerhard Gribkowsky in order to maintain control of Formula One."

At the outset of the trial, the circumstances "had not looked good" for Ecclestone. Instead, in a quirk of German law, "prosecutors agreed to drop the charges" after Ecclestone wrote a check for $100M to the state of Bavaria. With the threat of criminal charges and a decade-long stint in jail no longer hanging over the F1 boss, "attention can again turn to the future of the motorsport."

The end of the Munich trial means that Ecclestone "is likely to stay as head of the motorsport as long as private equity group CVC remains the largest shareholder," with 35% of the group.

A senior F1 figure said that "this limits CVC’s options." The person said, "No IPO can take place with [Ecclestone] in place."

Even though German prosecutors "dropped their case," it is unlikely that Ecclestone could be the CEO of a public company. A sale "is thus the most likely option." Liberty Global and Discovery Communications, which are both controlled by billionaire John Malone, are suitors for a 49% stake in F1, "through a deal that would buy out both CVC’s share" and the 14% share owned by the estate of Lehman Brothers.

Any new buyer "will have plenty of upside." CVC co-Founder Donald Mackenzie said that "the F1 deal was one of their top 10 deals."

But F1 "has not been wrung dry by private equity." Insiders said that the motorsport "punches well below its weight on marketing, sponsorship and media rights." A former F1 employee said, “I don’t believe the media rights have been sold as cleverly as, say, the Premiership." FT

Kvyat backs Formula 1 safety changes
Toro Rosso's Daniil Kvyat says it is right that Formula 1 is doing all that it can to improve safety levels.

In recent seasons, traditional gravel traps have been gradually replaced by large patches of tarmac run-off in attempts to make the sport safer, with the latest modification coming at Monza's famous Parabolica corner.

This has led to criticism from pundits, fans and certain drivers, but Kvyat feels the steps being made are vital.

"It is often forgotten that the speed taken through the corners has increased since the 80s, so if you make a mistake there remains a risk of violently hitting the barriers," Kvyat explained to Italian website OmniCorse.it.

"The risk in F1 cannot be erased. And if they had kept the run-off areas as gravel we could see drivers getting injured every weekend. So it is right that we do everything we can to improve the safety of the tracks and cars."

Certain personalities suggest that the changes have in turn created a field of cautious drivers, with Willi Weber, Michael Schumacher's former manager, going as far as to describe the current generation as "wimps".

But Kvyat, contesting his debut campaign, believes that courage will always be a fundamental aspect.

"Courage is always an important part of motorsport," he said. "I don't like it when they say that nowadays the drivers don't take risks and that we, in comparison with the 80s, are not real men. All these things are bulls**t."