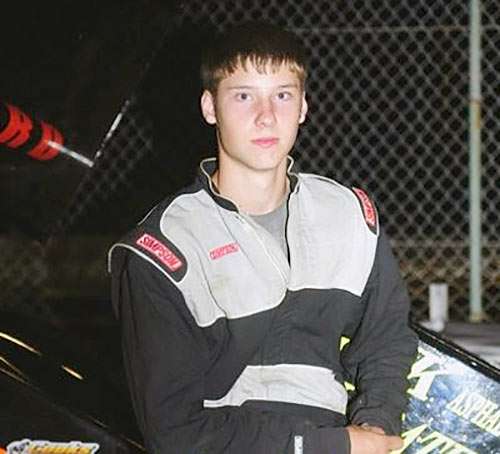 "It's just an unbelievable tragedy," said Zipadelli. "Our hearts go out to Kevin's family.

"This is a very emotional time for their family, our family at Stewart-Haas and Tony. That being said we feel as a group that Tony will not drive today.

"Tony feels strongly that this is the right thing to do, and we at SHR support it and agree with it."

08/10/14 Having watched the video below it is somewhat inconclusive whether Stewart hit Ward on purpose. I find it inconceivable that he would have hit Ward on purpose. Yes, Tony Stewart is a hot head and tries to mimic his childhood hero AJ Foyt, who also liked to use his size to bully other drivers. However, it was a poorly lit dirt track and Ward was wearing a black suit and black helmet.

It's possible Stewart tried to scare the finger pointing Ward back and misjudged how close he was and hit him. Ward is also at fault for getting out of the car and trying to shake his fist at Stewart. Drivers should not be allowed to get out of their car and do that, and if they do, they should be suspended immediately. As we now know, the 'drivers have at it attitude' NASCAR promotes can be deadly when it involves drivers standing on a track with race cars going past. It's a very sad tragedy that is making headline news this Sunday morning. Mark C. reporting for AR1.com

08/10/14 Tony Stewart hit and killed driver Kevin Ward Jr., who walked toward Stewart's sprint car Saturday night after the two had an altercation at Canandaigua (N.Y.) Motorsports Park, according to authorities, witnesses and video of the tragedy.

The three-time Cup champion was racing a sprint car in the Empire Super Sprints series at the half-mile dirt track in upstate New York, about an hour from Watkins Glen International, site of this weekend’s Cup race.

The Ontario County (N.Y.) Sheriff’s Office confirmed in a news release that the victim, whom it did not name, was declared dead 45 minutes after the accident upon arrival at Thompson Hospital.

"Mr. Stewart has cooperated with the investigation, which is ongoing," the release stated.

Stewart was not arrested and the sheriff told reporters that the driver had returned to Watkins Glen. The case will be handled by the district attorney.

Tyler Graves, a sprint-car racer and friend of Ward's, told Sporting News in a phone interview that he was sitting in the Turn 1 grandstands and saw everything that happened.

"Tony pinched him into the frontstretch wall, a racing thing," Graves said. "The right rear tire went down, he spun on the exit of (Turn) 2. They threw the caution and everything was toned down. Kevin got out of his car. … He was throwing his arms up all over the place at Tony for most of the corner.

"I know Tony could see him. I know how you can see out of these cars. When Tony got close to him, he hit the throttle. When you hit a throttle on a sprint car, the car sets sideways. It set sideways, the right rear tire hit Kevin, Kevin was sucked underneath and was stuck under it for a second or two and then it threw him about 50 yards."

Rich Willis, who was at the track, said he didn’t see exactly what happened but his sister down in Turn 1 did. His description was similar to that of Graves and video of the tragedy showed Stewart's car hitting Ward.

"People (who could see it better) said the guy got out of his car and was gesturing angrily at Tony Stewart when Tony Stewart came by during the next lap under yellow," Willis said in a phone interview. "He approached him and evidently when he was driving by the guy standing on the track gesturing at him, he gunned his engine.

"What happened was the back end kicked out and clipped the guy and the guy flew across the track."

Graves said it appeared to him that Stewart swerved before gunning the engine but he did not believe it was intentional.

"You never mean to do something like that," Graves said. "Kevin was pissed and he let Tony know. And Tony was trying to give the message back that he wasn't happy either. He went over the line with it."

Graves got emotional as he talked about Ward, whom he raced against last week in the Patriot Sprint Tour. In that race Graves' car broke, he got upside down and Ward hit him.

"The first thing Kevin said to me (last week after the accident) was, 'I'm glad you're OK,'" Graves said. "He hit me full throttle. I've been friends with Kevin for the last several years. … He's a clean racer."

The sheriff's department asked for any amateur video be sent to it for use during the investigation. It said the race was on lap 14 of a 25-lap event.

"The driver of the car that spun, exited the race car and walked down the track onto the racing surface," the sheriff's news release states. "Two racecars traveling in tandem approached as the driver continued down the track, gesturing to the two approaching cars.

"The first car swerved to avoid the driver out on the track. The second car, operated by Tony Stewart, struck the driver."

The 43-year-old Stewart has 48 Cup wins in 542 career starts. Stewart, who missed the last 15 Cup races last year after breaking his leg in two places in a sprint-car crash, is winless and 19th in the standings this year.

There was no immediate word whether Stewart-Haas Racing, co-owned by Stewart, would field Stewart’s car Sunday at Watkins Glen. With him released without being arrested, Stewart could race at The Glen, or the team could opt to put a different driver in the car or withdraw. Stewart is scheduled to start 13th .

"A tragic accident took place last night during a sprint car race in which Tony Stewart was participating," an SHR spokesman said in a statement. "Tony was unhurt, but a fellow competitor lost his life. Our thoughts and prayers go out to his family and friends."

Graves, who described himself as a huge Stewart fan until Saturday night, doesn't think Stewart should be racing.

A race car driver was killed Saturday night after he was struck on the track by NASCAR star Tony Stewart, according to Ontario County (N.Y.) Sheriff Philip C. Povero.

During a sprint car race at Canandaigua (N.Y.) Motorsports Park, driver Kevin Ward Jr. was spun out by Stewart, got out of his car to show his displeasure and then was struck by Stewart's car, sending Ward sliding down the track, fellow sprint car racer Tyler Graves and witness Adam Dulski told USA TODAY Sports.

Povero confirmed the driver was taken by ambulance to Thompson Health and was pronounced dead on arrival.

"This is an ongoing investigation of an on-track crash," Povero said.

Povero indicated Stewart, 43, was ''fully cooperative'' and that the incident is not being investigated as a criminal matter.

"Next is continuing interviews, a continued evaluation of evidence we have, including video, and there is certainly going to be an evaluation of medical evidence when it is collected from the autopsy," Povero said.

"A tragic accident took place last night during a sprint car race in which Tony Stewart was participating. Tony was unhurt, but a fellow competitor lost his life. Our thoughts and prayers go out to his family and friends. We're still attempting to sort through all the details and we appreciate your understanding during this difficult time."

NASCAR did not respond to USA TODAY Sports' request for comment.

An Ontario County Sheriff's Department spokesperson confirmed deputies were on the scene and investigating an incident at the track before Povero spoke with the media around 3 a.m. Sunday morning.

Ward, who raced the No. 13 sprint car at the track, started racing go-karts in 1998 at 4, according to kevinwardracing.com.

Coming out of Turn 2, Stewart's car squeezed Ward's car up into the outside wall, turning it around. Ward's car had a flat tire as a result, and he exited the car to show his displeasure with Stewart's move. He marched down the track and was pointing at Stewart's car as he approached on the ensuing caution lap. Stewart's car then clipped Ward, who was run over and thrown a few yards down the track.

"It happened in Turn 2," said the 27-year-old Dulski. "The prior lap, Tony had gotten into him – just spun him, nothing big, just spun him around. The caution came out. He hopped out of the car – the driver of the 13 … he hopped out to go and yell and point a finger at Tony, typical thing.

"Tony came around … the back end slid out, and he definitely caught him – I couldn't tell if it was with the front or the back of the car. … The body made contact with the car and went sliding across the track. It was the worst thing I've ever seen."

Graves, 16, of Bolivar, N.Y., said he "grew up watching Kevin the last couple years, then I made the move to sprint cars. I now race a 360. I've raced alongside with Kevin the past two years. …

"Tony and Kevin were battling. … I believe they got together on the frontstretch, Kevin hit the wall and his tire went down. So he spun between (turns) 1 and 2. He got out of the car after the caution was thrown and began to walk down the track, pointing right at the 14, throwing his hands all around. The last thing I seen Kevin do was put his finger to his helmet."

Graves said he saw Ward caught up under the tire and then launched a few yards down the track. Ward hit the ground and didn't move, according to Graves.

Stewart, a three-time Sprint Cup champion who suffered a compound fracture of his right leg in a sprint car accident a year ago, had just returned to the hobby he says helps fuel his success in NASCAR. He was scheduled to compete Sunday in a Sprint Cup race at Watkins Glen.

In July of last year, Stewart also was involved in an incident at the Canandaigua track. He sparked a multi-car wreck that sent two drivers to the hospital with injuries.

After Saturday night's incident, racing was canceled for the rest of the night, according to the track's Facebook page.

In a later post, the track said: "Canandaigua Motorsports Park will not have an official statement on the accident that happened in the ESS race until tomorrow. Please pray for the entire racing community of fans, drivers, and families. Please be respectful in any comments." USA Today