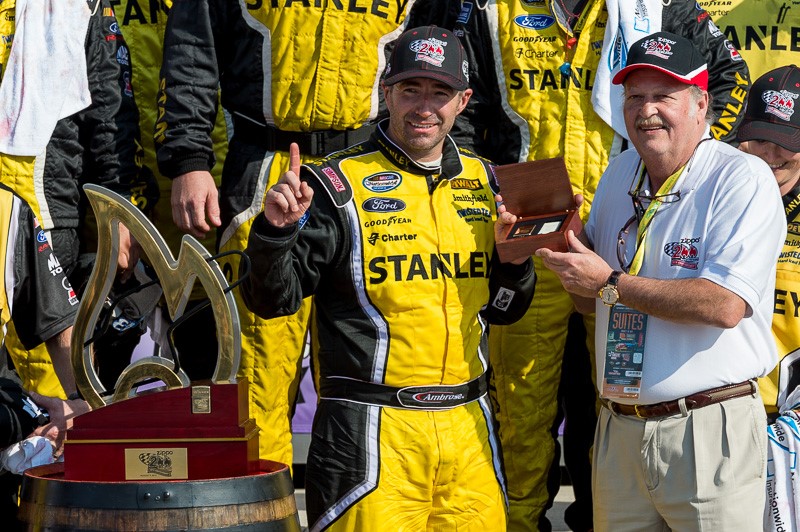 Recovering from an early spin after contact with Kyle Busch's Toyota, Marcos Ambrose held off Busch in the closing laps of Saturday's Zippo 200 at the Glen to win the series-best fifth road course race of his Nationwide Series career.

The Australian driver has won four consecutive NNS starts at 2.45-mile Watkins Glen International, having triumphed in three straight from 2008 through 2010 and this year after a three-race hiatus from competition at the Glen.

Though Ambrose knows full well the big prizes — a NASCAR Sprint Cup Series victory in the Cheez-It 355 at the Glen (1 p.m. ET on ESPN) and a berth in the Chase — will be contested on Sunday, he was eager to savor the NNS win.

"I just want to enjoy today," Ambrose said. "You get to victory lane, and it's special. I would love to repeat, but it's a lot of work tomorrow. I want to think about this and get a good night's rest and come attack them tomorrow."

During an exchange of pit stops with 32 of 82 laps left, Ambrose surged past Joey Logano as the driver of the No. 12 Team Penske Ford exited pit road. When the sequence of stops cycled through, Ambrose, who had pitted one lap earlier than Logano, held the lead, with Logano running second.

Ambrose kept the top spot after a restart on Lap 63 that followed the fifth and final caution of the race. With five laps left, Busch roared past Logano but couldn't get to the bumper of Ambrose's No. 9 Richard Petty Motorsports Ford in time to make a move for the win.

The way Logano saw it, losing the spot to Ambrose during the cycle of green-flag stops was crucial.

"That was definitely a key moment," Logano said. "If I was able to get in front of him there… all I needed was three-tenths of a second probably, and that would have been enough position into that corner to beat him through the esses and get position. I felt like, if I got clean air and ran hard, that I could have gapped him.

"Would it have been enough to beat him? We'll never know. But I feel it would have been closer for us, for sure."

"I think if I hadn't cleared him right there, he would have been gone," Ambrose said. "Maybe I could have stalked him a little bit and got him in traffic, but we had a fast enough car to lead like that, but it would have been really tough to pass."

Before the battle with Logano was even a consideration, Ambrose had to recover from a Lap 6 spin in the bus stop chicane after he and Busch collided near the entrance.

"He ducked out late, and then the spotter was late," Ambrose said. "I was already committed to that line, and he thumped my left rear there. It wasn't intentional. I've got no malice against him whatsoever—he spun out, too."

Busch wasn't quite as charitable in his assessment of the mishap.

"We didn't qualify as well as we needed to and tried to make a move on somebody who didn't give a crap, and then he just turned into me and spun us out, so that put us behind," Busch said. "We came back and got second."

In a quirky sort of way, the accident may have helped both drivers. Both Ambrose and Busch brought their cars to pit road for fuel and fresh tires under caution on Lap 13. Knifing his way through traffic, Ambrose worked his way back to fifth before pitting again under green on Lap 20, covering stops made by Keselowski (Lap 18) and Logano (Lap 19).

"If you'd told me that's how we were going to do the race, I would have said that's a bad strategy," Ambrose quipped. "But it worked out for us—first and second. For two guys doing pirouettes in the bus stop, that's pretty cool.

"And it just shows you how these races are never over. You can't quit. Just because you're in the grass backwards doesn't mean your race is done."