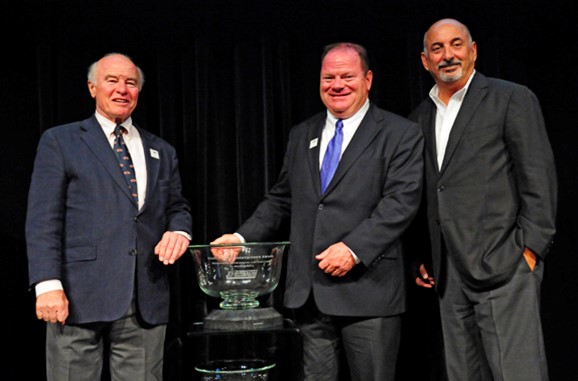 Owner of teams in the NASCAR Sprint Cup, Verizon IndyCar and TUDOR United SportsCar Championship series, and a former racer in SCCA amateur and pro competition, Ganassi was feted by an elite group of racing dignitaries, industry sponsors and community leaders.

"Very few have achieved what he has," speaker NASCAR President Mike Helton said of Ganassi who, in his 25th year as a team owner, can boast of 17 championships and 150 race wins, including five at the Indianapolis 500 and five at the Rolex 24 Hour At Daytona.

In 2010, Ganassi teams recorded 19 wins in all three series, including victories in the Daytona 500, the Indy 500 and the Brickyard 400, making him the only team owner to win all three crown jewels of racing in a single season. That achievement was followed in early 2011 with a victory in the Rolex 24 At Daytona. Ganassi became the first owner to hold all four titles at one time.

Relating to a photo in the award dinner program showing Ganassi standing with the Indy 500, Daytona 500 and Rolex 24 At Daytona trophies, Helton said, "That is significant hardware. If you stop and think about it, and really let it sink in, motorsports is a very challenging business to be in, particularly as a car owner, and there's a few sitting here who can attest to that. The more aggressive you get, the more challenging it gets. So when you look at that photograph, understand that in today's world you can count on one hand the individuals who are able to compete at the level that Chip Ganassi does today as successfully as he does."

"Winning a big race is always something that sticks in your mind," Ganassi said in remarks after being presented with the Cameron R. Argetsinger Award, a custom-designed and hand-craft glass bowl. "But there are hundreds and hundreds of people who are behind me. I wish I could have every one of them up here with me," he said.

The award honors Cameron R. Argetsinger, founder and organizer of the first races in Watkins Glen. Races have been held continuously since the first in 1948.

"I consider Watkins Glen my home track," the Pittsburgh native continued. "I've won races here myself in Formula Ford. I've had cars that won here. It's great to be at arguably the birthplace of motorsports in this country, and certainly to have the Research Center here is a worthy thing. They'll have me as a supporter for a long time, I can assure you."

The non-profit International Motor Racing Research Center is dedicated to preserving and sharing the history of motorsports of all racing series and all tracks worldwide. Argetsinger was president of the Center for five years starting in 2002.

Other speakers during the evening included Lisa Noble, SCCA president and CEO, who recalled the days she watched Ganassi compete in the SCCA National Runoffs, IndyCar's Brian Barnhart, senior vice president of competition, IMRRC president J.C. Argetsinger, and Bobby Rahal, the 1986 Indy 500 champion and chairman of the IMRRC Governing Council.

"The true history of motorsports couldn't be told without him," Barnhart said of Ganassi.

Ganassi Racing NASCAR driver Jamie McMurray enjoyed some fun with his employer, relating stories of tense yet humorous moments during team meetings among Ganassi's "seasoned" drivers such as McMurray and rookies such as Kyle Larson and Sage Karam.

But McMurray also had heartfelt words for his boss, saying, "I hope we get to make a lot more history together."

"He's the youngest guy in the room!" Punch declared of the 19-year-old racer. "That's what I call smart race-car driving!"