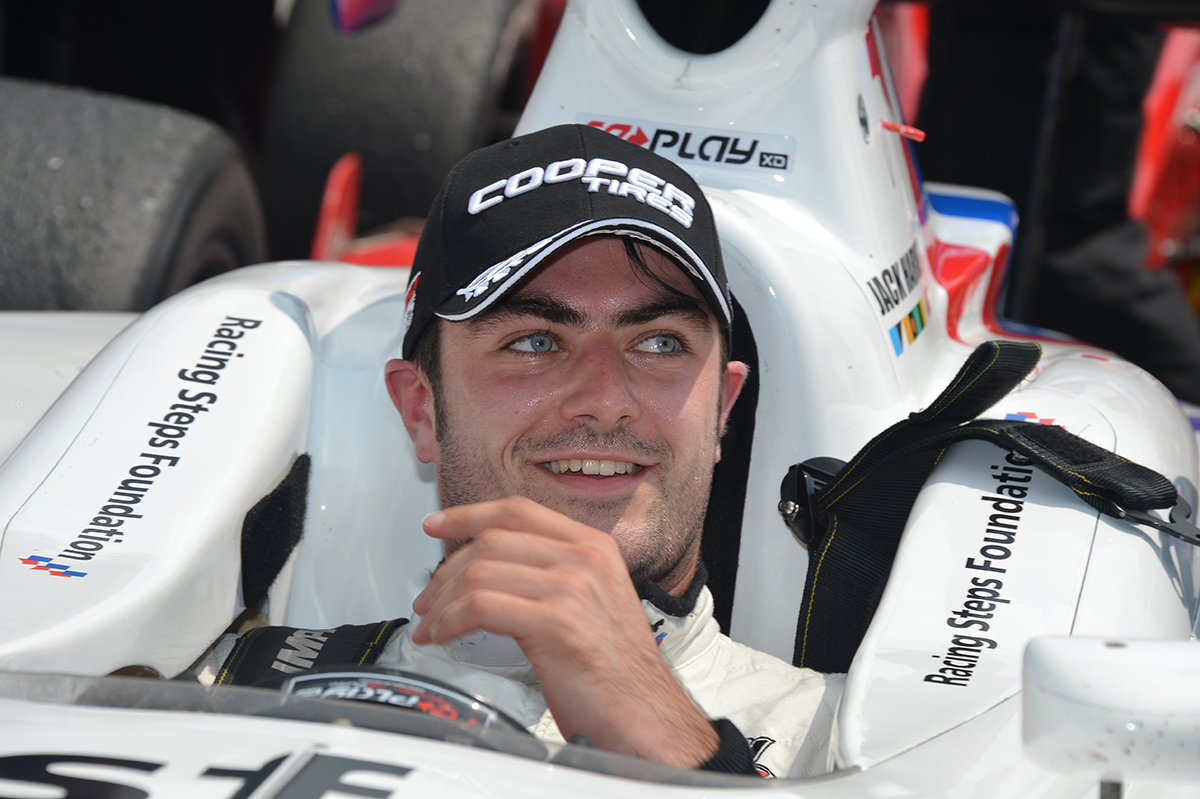 UPDATE A reader points out, Dear AR1.com, If you look at the replay Razia punctured Brabham's left rear tire with his right front wing ending Brabham's race and causing himself to be hit and spun out. Just wanted to clear that up. Mike Griffing

Lexington, Ohio – Englishman Jack Harvey today completed his domination of the Grand Prix of Mid-Ohio weekend, earning the second of two Indy Lights Presented by Cooper Tires victories at the famed road course while also taking both pole positions and logging the fastest lap in each race as an exclamation point. His commanding 12.180-second victory has moved him into second position in the championship with three races remaining.

Harvey, 21, started his #42 Racing Steps Foundation car on the front row next to Schmidt-Peterson Motorsports with Curb-Agajanian teammate Luiz Razia. Razia, from Brazil, came under pressure from Andretti Autosport's Matthew Brabham as the green flag fell, with Brabham getting a nose on the inside of Razia going into Turn Four. Unfortunately, Brabham could not make the pass stick, tapping Razia's right rear. The resulting damage ended Brabham's day and put Razia a lap down.

Harvey timed the restart coming back from the ensuing yellow perfectly, but now had championship contenders Zach Veach and Gabby Chaves in his mirrors as the front three began to pull away from the field. Consistently quick laps gave Harvey a five-plus second lead by the halfway mark and left his pursuers firmly in his wake during the 40-lap event.

Managing to avoid the first lap incident, Ohio native Veach (Andretti Autosport) got around third-place starter and championship leader Chaves (Belardi Auto Racing) for second position. Veach, 19, who fell from second to third in the championship, held onto the position to the finish despite battling understeer and brake issues.

The 21-year-old Chaves maintained his championship lead with a third-place finish, though the title chase became that much tighter, with the surging Harvey now only 18 points behind. The young Colombian-American, starting fourth, could not keep Veach back in the first lap incident but recovered to score his eighth podium finish of the year.

Zimbabwe's Axcil Jefferies scored another fine finish in his second Indy Lights race holding fourth position ahead of a hard-fought battle for fifth. No fewer than five cars swapped positions in the middle of the field, with Juan Piedrahita (Schmidt-Peterson Motorsports w/Curb-Agajanian) cementing the advantage by mid-race. Teammate Juan Pablo Garcia maneuvered around Team Moore Racing's Jimmy Simpson on lap 14 for sixth position.

On the penultimate lap, Simpson tangled with the recovering Razia, who didn't quite complete the pass, cutting across the Indianapolis native's front wing, and costing him seventh position. Ryan Phinny (BHA/JMM w/Curb-Agajanian) finished in seventh, ahead of Simpson and Scott Anderson (Fan Force United) while Zack Meyer finished 10th, after a lap 11 off-course excursion during the height of the mid-field battle.

Contingency awards included a customized Race Energy BCM21 charger – the official battery of the ladder series – to the winning team of Schmidt Peterson Motorsports with Curb-Agajanian.

Jack Harvey, #42 Racing Steps Foundation (Schmidt Peterson Motorsports with Curb-Agajanian): "Today's race was a little bit harder than yesterday. I think yesterday we set the bar and the other guys responded pretty well. My car was fantastic again. I am not sure what happened at the start but all I saw was Zach [Veach] and Gabby [Chaves] come through in second and third. These guys are on fire in the championship and they were the last two people I wanted to see in those positions. I had a good restart. They were also very fast and I was pushing as hard as I could at that moment just to be sensible, to be smart and not overwork anything. The car felt as good at the end as it did at the start so just a big thank you to all my team and my sponsors. I wouldn't be here without them so this victory is as much for them as it is for me."