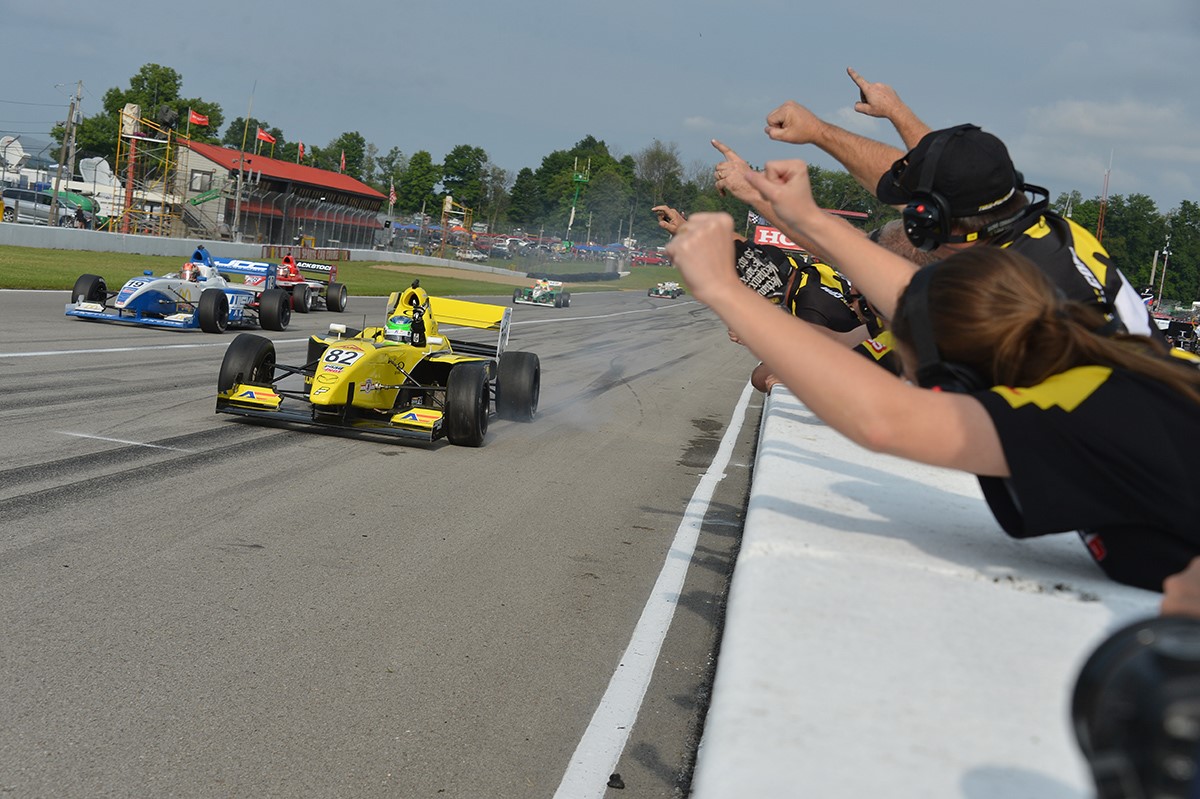 Nicolas Costa overcame a severe bout of stomach cramps to score a finely judged victory in this evening's Cooper Tires Pro Mazda Grand Prix at the Mid-Ohio Sports Car Course, Round 10 of the Pro Mazda Championship Presented by Cooper Tires. The 22-year-old Brazilian fell ill last night, after claiming his first pole position yesterday for Team Pelfrey, and didn't even arrive at the track until shortly before the race as he attempted to overcome his affliction.

It was the first-ever Pro Mazda win for Costa, who rejoined the Florida-based team in May at Lucas Oil Raceway after a partial campaign in 2013.

The race was interrupted by a full-course caution soon after the start due to a couple of separate incidents, but not before there had been some shuffling toward the front of the field. Costa had maintained his advantage over fellow front row starter Kyle Kaiser (Juncos Racing), but behind them Ryan Booth made a sensational getaway for JDC MotorSports, rising from sixth on the grid to third ahead of the Andretti Autosport pair of Garett Grist and Shelby Blackstock, then series points leader Spencer Pigot (Juncos Racing), who made up a couple of positions from a disappointing eighth on the grid.

The restart saw Costa remain in charge from Kaiser and Booth as Blackstock snuck past Grist for fourth.

Another full-course caution set up a five-lap dash to the checkered flag during which Costa resisted a strong challenge not from the unfortunate Kaiser, who abruptly slowed during the caution (before rejoining at the back of the field), but from Booth, who continued his steady improvement and finally finished just 0.3458 seconds in arrears. It was the second podium of the season for Costa and the first for Booth.

Bobby Eberle (World Speed Motorsports) comfortably won the Expert division, for drivers over age 30, and thereby took over the points lead from Jay Horak (M1 Racing), who pulled off course after 10 laps.

Booth snared the RePlay XD Move of the Race Award for his overtaking maneuvers at the beginning of the race. Kyle Connery (JDC MotorSports) claimed the Quarter Master Hard Charger Award after rising from 19th on the grid to 11th. Additional contingency awards included the PFC Award and customized Race Energy charger – the official battery of the ladder series – to the winning team, Team Pelfrey; and the Staubli Award to Dalton Kellett of Team Pelfrey.

Nicolas Costa, #82 buygapguard.com (Team Pelfrey): "It was a tough race. I had to manage the start and all the restarts the best way I could and it worked. It was important to make a gap especially the first lap so they don't draft me on the back straight. I managed to do that. The last couple of laps, I knew Ryan [Booth] was coming but I was kind of not pushing – I was just pushing in the places that I thought he might pass. It worked. It was tight but it worked and I am really happy for Team Pelfrey. They have done a cracking job for me the last three races that I have been with them. They really deserve this and I am really happy for my first win in the championship."