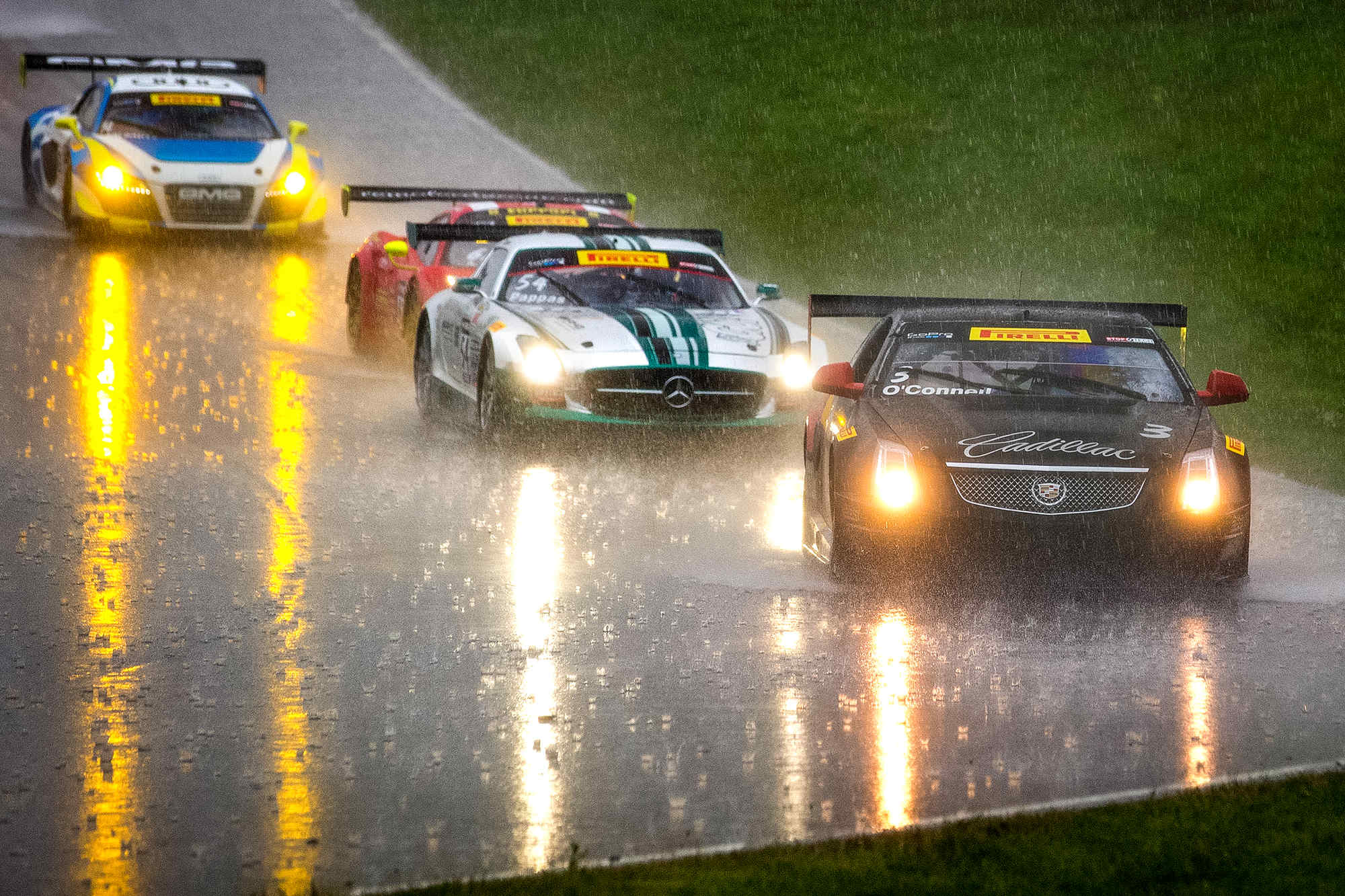 Ryan Dalziel, Michael Mills and Lawson Aschenbach have taken GT, GT-A and GTS victories in a rain-shortened Round 11 of the Pirelli World Challenge season, the Mid-Ohio Sports Car Challenge Presented by StopTech.

In what was the reverse of Friday's Touring Car race, the weather conditions shifted from dry to wet, and intensifying rain forced the early conclusion to what had been a scheduled 50-minute timed race. Once the rain hit, course conditions shifted from yellow to red and checkered, and the race declared final by Race Control after a race time of 35 minutes and 55.908 seconds. The last completed lap was Lap 19.

Dalziel, of Winter Park, Fla., started fourth in the No. 31 EFFORT Racing Porsche GT3 R but advanced into third right off the line behind polesitter Mike Skeen, of Charlotte, N.C., in the No. 2 Hawk Performance Audi R8 Ultra and Johnny O'Connell, of Flowery Branch, Ga., in the No. 3 Cadillac Racing Cadillac CTS-V.R, who'd made a dynamic start from seventh up to second. O'Connell's start, fittingly, was named the Cadillac CTS-V Move of the Race.

Before the race had too much chance to get going, a multicar accident involving Marcelo Hahn, Craig Capaldi and Mitch Landry, among others, forced the race to go under caution on the first lap. The near-50 car field had made it away cleanly through Turn 1 following the standing start.

On Lap 6 the race resumed with Skeen in the lead and Dalziel able to make the move on O'Connell for second, exiting Turn 1.
The top three were able to continue their battle from there, Skeen ahead of Dalziel with O'Connell close, before rain hit the Mid-Ohio Sports Car Course with just over 15 minutes remaining.

The rain prompted a full-course caution on Lap 17, and also affected strategies. O'Connell and Skeen took the opportunity to pit for rain tires, while Dalziel, who was making his first start this season, gambled that the race would not resume.

As the rain progressed from a steady rain to a near downpour, Race Control determined the course was unsafe to continue racing. Dalziel was in the lead at the time the course conditions shifted, with Lap 19 confirmed as the last completed lap. The win is Dalziel's first in Pirelli World Challenge.

"We figured we'd won but just needed confirmation, and I was wondering what would happen to Skeen," Dalziel said. "We stayed out despite the conditions; it's a shame to finish like that. Hopefully I didn't make myself look too bad and I'm really thankful for EFFORT Racing providing the opportunity. It's difficult to jump between an HPD and a Porsche GT3 R."

He added of the start and his battle: "The McLarens (Alex Figge and Robert Thorne) got a bad getaway, and I got a great start. Johnny was right on my rear. I like racing with Johnny, as he's always clean. We were starting to chip away at Mike. The strength of this car is the tires over a run; unfortunately the end occurred under yellow and we didn't get a chance to hunt Skeen down for the win on track."

O'Connell was classified second with Skeen third. O'Connell will add to his points lead after finishing ahead of his top title rival.

Anthony Lazzaro, of Atlanta, Ga., in the No. 61 R. Ferri Motorsports Ferrari 458 Italia GT3 and Andrew Palmer, of Chicago, in the No. 21 GMG Racing Audi R8 Ultra, rounded out the top five.

In GT-A, Mills, of Angleton, Texas, secured his third win of the season in the No. 41 EFFORT Racing Porsche GT3 R and second in a row. It also meant EFFORT Racing scored its first double victory in Pirelli World Challenge, and is the second team to do so this season (R. Ferri Motorsports also won GT and GT-A at Round 3 at Barber).

Mills made the winning move with a pass on fastest GT-A qualifier Albert von Thurn und Taxis, of Regensburg, Germany, in the No. 24 Reiter Engineering Lamborghini Gallardo FL2 just before the second yellow flag.

"I was patient with Albert and the conditions were changing," Mills said. "We got rain in some parts and not others. I watched where he was weak and got underneath him in 1. He was a gentleman about it, and that was the end of it. It's awesome for Jim (Taggart) and I, for Ryan (Dalziel) to get a win; it's a great day for Porsche, great day for EFFORT."

In his return to Pirelli World Challenge, Jim Taggart, of Cary, N.C. finished second in GT-A in the No. 7 Absolut/Porsche Porsche GT3 R with von Thurn und Taxis down to third, but still on the podium.

Prior class points leader Henrik Hedman, of Ft. Lauderdale, Fla., in the No. 10 DragonSpeed Ferrari 458 Italia GT3, finished eighth among GT-A classified drivers and thus Mills should move to the GT-A points lead following this race.

GTS was more of a straightforward affair with Aschenbach, in the No. 1 Blackdog Speed Shop Chevrolet Camaro, able to control the race from pole position en route to his second win of the season.

"I could tell at the start that the rain was coming, and it was a matter of when not if," Aschenbach said. "I got a clean run off the line, then got some GT cars in-between, the gap came and we just had to maintain it. Hats off to Blackdog Speed Shop and this Chevy Camaro; we're pumped to get our season back on track."

Second after starting fourth was Alec Udell, of The Woodlands, Texas in the No. 17 Watson Racing/MDG Ford Mustang Boss 302S while third was Nic Jonsson, of Buford, Ga., in the No. 36 DonorsChoose.org Kia Optima.

Jonsson led home Kia Racing/Kinetic Motorsports teammate Mark Wilkins, of Toronto, in the No. 38 PutOnTheBrakes.org Kia Optima. In his first start of the season, Joey Atterbury, of Rochester, N.Y., made a nice charge from 11th on the grid up to fifth in the No. 33 Capaldi Racing/Ford Racing Ford Mustang Boss 302S.

One of Atterbury's teammates at Capaldi Racing was in a race for charity during race one of the weekend at Mid-Ohio. Pirelli World Challenge President/CEO Scott Bove, of Conifer, Col., made his first series start since Austin last year in the No. 55 Special Operations Warrior Foundation Ford Mustang Boss. Bove completed 12 laps and advanced five positions from a GTS starting position of 25th up to 20th in class by the checkered flag. Bove and Austin Cindric, of Mooresville, N.C., are racing this weekend in support of SOWF to raise awareness and funding.

Of note, James Sofronas, of Villa Park, Calif., took home the Invisible Glass Clean Pass of the Race award with a move on Andy Pilgrim, of Boca Raton, Fla., for sixth place. Sofronas, in the No. 14 Spyder/The Thermal Club Audi R8 Ultra, finished sixth with Pilgrim, in the No. 8 Cadillac Racing Cadillac CTS-V.R seventh in GT.

Also of note, Larry Funk, of Oberlin, Ohio, was the Sunoco Hard Charger after starting 21st in GTS and then ending eighth in the No. 22 Business Advisory Services BMW M3. Jay Matus, of Houston, took home the Optima Batteries Best Standing Start with a gain of seven positions off the start in the No. 71 VP Fuels Porsche 996. Matus finished 15th in the GTS class.

Results and points are provisional until posted as final. By virtue of setting the fastest race laps, Dalziel (GT) and Aschenbach (GTS) will have the pole positions for Sunday's Round 12.