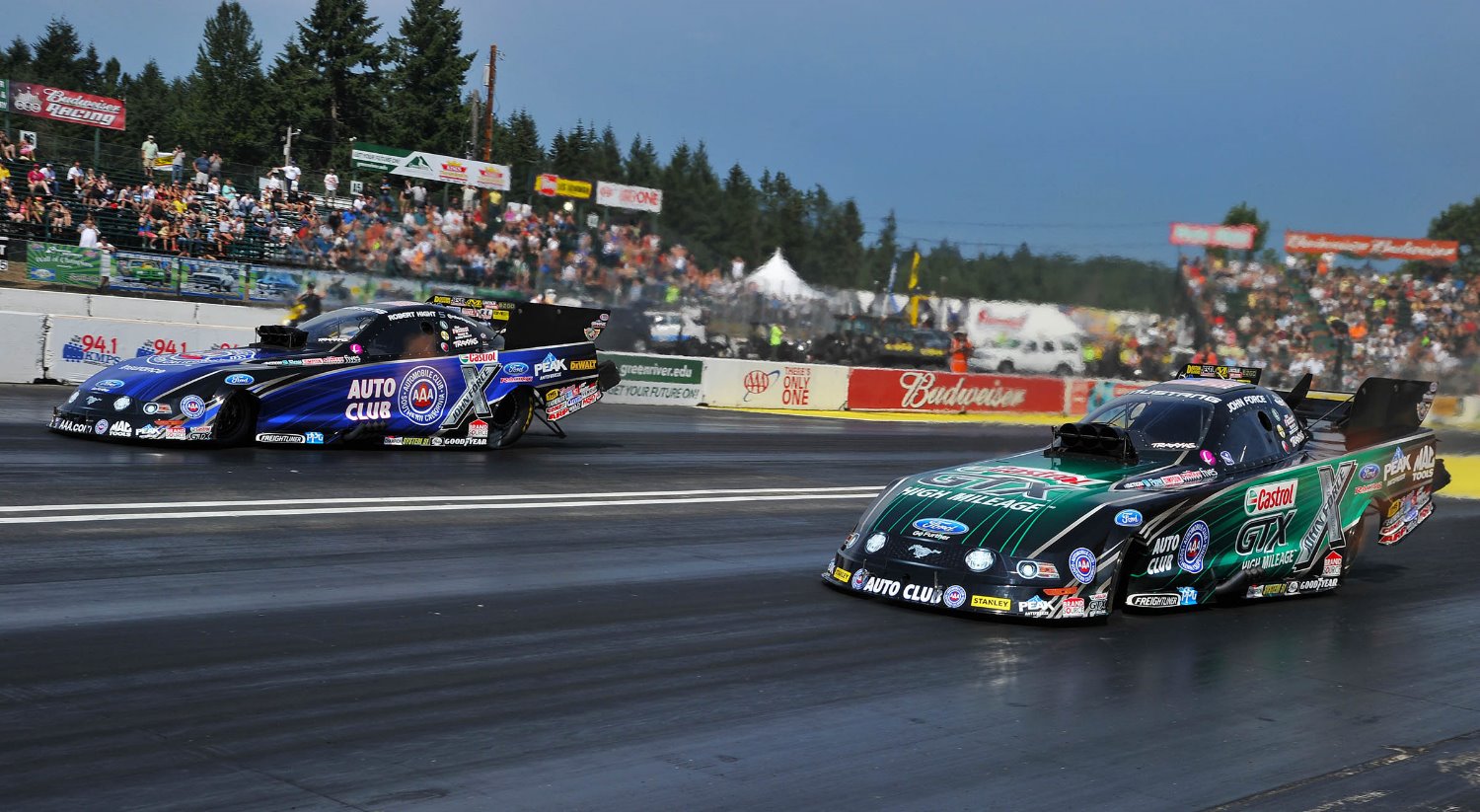 SEATTLE, WA – After today's two qualifying sessions at the picturesque Pacific Raceways located in the shadow of majestic Mount Rainier in Washington State, John Force rebounded from his first run and ended the day rocketing to the number one spot with a mind-numbing 4.085 second run at 308.07 mph. The reigning NHRA Mello Yello Funny Car champ pocketed three qualifying bonus points for the effort. If Force stays No. 1 it will be his 150th career No. 1 extending his impressive NHRA record.

"Jimmy Prock (crew chief, Castrol GTX High Mileage Mustang) has been real consistent with this Ford, it's running really good. It got loose down on the first run, I got back in it, I had to, but it punishes the motor and that's costly in this economy but luckily, it didn't hurt it. Also, it ran through and it moved us to the back of the pack. And, temperature started dropping real fast, Jimmy stepped it up like Mile Neff on Robert's car. Unfortunately, they dropped a cylinder and didn't make a good run, but Courtney (Force) made it and Brittany's (Force) running good in the dragster," said John Force.

In the first session, John's Castrol GTX High Mileage Mustang was lined up next to teammate, son-in-law, and current NHRA Mello Yello points leader, Robert Hight. John's 8,000-hp Funny Car lost traction at the 300-foot mark and began smoking the massive Goodyear slicks. He only managed to run a 4.520 second run at 232.31 mph. Despite this, John Force still managed to qualify 8th in the first round as other drivers where getting their tune-up sorted out for the track and weather conditions.

"I love coming here, we use to have 64 Funny Cars back in the old days, heck, even 100 when I first got started. Today, if we could've run later, we've would have seen some better times. That sun was setting and reflecting off that Christmas tree and it bit me one year but hey, they're investing in the race track," said Force.

Going into the second session, the air temperature dropped, and with it, crew chief Jimmy Prock was looking to take advantage of the weather conditions while pushing the track surface as far as he could to get his boss moved up in the field.

At the first hint of green, the Castrol GTX High Mileage Mustang stampeded out of the gate and on the other end, turned in a great 4.085 second pass with the header flames shooting seven feet in the air. Quite a scene to the fans in the stands, but it was just as impressive for the reigning NHRA Funny Car champ.

"The crowd for a Friday was pretty good and the stands will be packed tomorrow and we'll have a home run. We come up to give them a show and that's what we'll do this weekend. It still rattled the tires on that 4.08 pass but the track is good and you Jimmy Prock will want to step it up tomorrow," said John Force.

The 16-time NHRA Mello Yello Champ will get two more shots tomorrow to get a handle on the track. With this being the final stop on the Western Swing, John Force would like get win number 141 on Sunday. After being shutout in the finals at the last two events by fellow teammates and family members Robert Hight and Courtney Force, the seasoned veteran would like a get at least one win on this western trek.

Courtney Force kicked off her first qualifying run by driving her Traxxas Ford Mustang down the race track in 4.696 second pass at 177.42 mph.

"We had a solid pass, unfortunately I let the car get the best of me. I let it take me over to the left and I got out of the groove and it spun the tires. Kind of lost out on that run. It was on a good run. It was going to run better than 4.20 on the first pass," said Force.

In the second session, Force improved by several spots when she laid down a 4.125 ET at 301.60 mph. By the end of the day Friday, Courtney Force had settled in the top half of the field in the No. 5 spot. Only the top 12 teams in each professional category get to keep their best time going into Saturday. The rest of the teams have to start over with a blank slate. The Traxxas Ford Mustang team will be one to keep their time going into the two final qualifying sessions.

"We went out in Q2 and I was able to keep it right in the center and we laid down a solid run. We need to get a couple more runs in the heat tomorrow and we'll be ready for race day," added Force.

Brittany Force drove her Castrol EDGE Dragster to the No. 11 qualifying spot today at the NHRA Northwest Nationals. The 2013 NHRA Auto Club Rookie of the Year blasted down Pacific Raceway with a solid 3.868 second run at 309.34 mph. However, the sophomore Top Fuel driver is looking to make it past the first round on Sunday and maybe, with some luck, go to her fourth final round this season.

"I love coming back to Seattle, my family has been racing here for so many years, and it's a familiar track to me so it's nice to be back. My sister, Courtney (Force) got her first win here in A/Fuel Dragster and Funny Car so ESPN announcer Mike Dunn made the comment that this event produces first time winners, so I'm hoping that this weekend it will be the Castrol EDGE team," said Brittany Force.

It was on the first session that Brittany's dragster fired off the starting line like a missile and blasted to the end of the track with that 3.868 second run at 309.34 mph. This solid performance had Force in the 6th spot after that round of qualifying. Unfortunately, she knew the qualifying order would get reshuffled and she would end up in the back of the pack.

"I was excited to go out there on that first qualifying pass and run straight down the track with that 3.86. I was pumped about it and we ended up number six for a while, but we moved down the order. We actually hurt it on that first pass and we really didn't find out how bad we did until the warm-up before the second qualifying session. My guys had to rip the motor apart and rebuild it twice before that second run," said Brittany Force

Going into the second session, the track and air temps started dropping. Crew chief Todd Smith wanted to step up the already potent Castrol EDGE Dragster even more and get Brittany in the top half of the field. He knew that overpowering the track would be a possibility, but he rolled the dice. Unfortunately, Brittany began to haze the tires around half track and wisely shut it down as not to incur unnecessary damage to her dragster.

The result was a 4.387 second run at 179.71 mph. However, with only three more races left until the start of the Countdown, Brittany Force and her crew know it's time to go rounds and secure a birth in the field.

"I can't believe we're at that point. To me, it feels like the season has just started. It's insane to think it's halfway done, but that just proves I really like my job and I'm having a lot of fun out here with all my guys. By the way, they also agree with me and can't believe the Countdown is almost here. I'm pumped and feel we are in a good position to stay in the top ten. Missing it last year during my rookie season just made me work even harder this year and made me want it more. Just as long we stay after it and keep going rounds, I think we should be safe," said Brittany Force.

The Castrol EDGE team will get two more shots down Pacific Raceways on Saturday to dial-in Brittany Force's 10,000 horsepower Castrol EDGE Dragster. With the brain trust of Todd Smith, Dean "Guido" Antonelli, and the rest of the crew, Brittany Force has the momentum to make it to the finals on race day and possibly get her first Top Fuel win for Castrol EDGE and John Force Racing.

The Auto Club Ford Mustang team battled the conditions and a consistent issue with dropped cylinders in both qualifying sessions today. In the first session Hight's Auto Club Funny Car dropped a cylinder and the five time winner had his hands full on the run. He crossed the finish line beside John Force in. 4.204 seconds at 268.76 mph and out him 6th.

In the final session of Friday Hight once again had a hole out and his run was slower posting a 4.391 seconds at 280.89 mph. He wrapped up the day as the 14th quickest Funny Car in an eighteen car field. He will have two shots tomorrow to get into the top 16.

"We just had an issue dropping cylinders. I am not worried about that since I have the best crew in the business working on my Auto Club Ford Mustang Funny Car. We have two runs tomorrow and we will try and get into the top half of the field," said Hight.