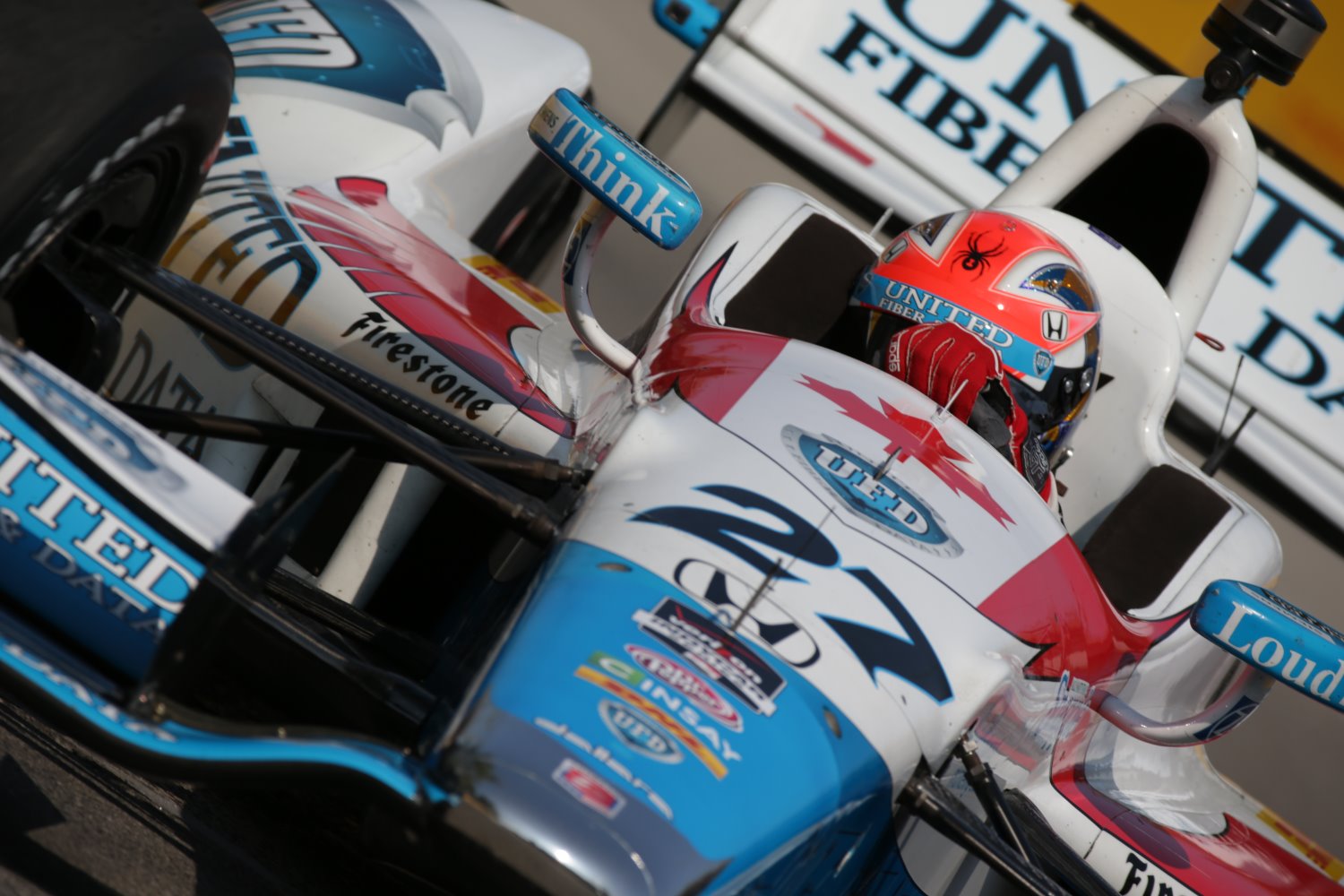 James Hinchcliffe said he could feel his chances of finally winning his hometown Verizon IndyCar Series race slip away as the rain began to fall on the Exhibition Place circuit in the second of two Honda Indy Toronto races on Sunday.

He had finished eighth in the first race that morning.

As he turned his No. 27 Andretti Autosport Honda into Turn 8 of the second race just 12 laps into the scheduled 65-lap event, he could see Juan Pablo Montoya hit the tire barrier and then Mikhail Aleshin ran into, and was underneath, Montoya's Team Penske Chevrolet.

Hinchcliffe tried to brake to avoid both of them, but it was too late.

"It had started to rain and when I hit Turn 8 and hit that concrete with a little bit of water on it. I mean it was like ice," he said.

"The car was backwards before I could even try to correct it."

For the next critical three minutes, Hinchcliffe was stuck in the tire barrier unable to extricate himself to get back in the fray.

It was the killing blow to his chances to win a Honda Indy Toronto.

Hinchcliffe was visibly upset at not getting help from the IndyCar safety crew, but he also knew they needed to tend to Aleshin who was trapped underneath Montoya's car.

"Obviously I am glad Mikhail is okay but because of the severity of that incident what could have been just being maybe one lap down, I was four laps down and my race was effectively over," he said.

And when race officials decided to not to red flag the race because of rain at that point Hinchcliffe knew his fate was sealed as he would be stuck four laps down to the leaders.

"I don't know why a red flag was not waved, they did it twice on Saturday; they seem to make up rules on the run," he said of IndyCar race stewards.

From that point on, it was just a matter of turning laps for the 27-year-old Oakville native.

Because the track was still slick from the rain, he didn't want to be the next one to cause a wreck and cost someone else a chance at a win.

"After that, I really didn't want to mix it up with the leaders," Hinchcliffe said.

"It was such a bummer because we had such a strong car and I knew we could have been up there battling for the win."

It has been the story of Hinchcliffe's racing life at the downtown Toronto track.

On Sunday, he added to that sorry total with an 18th-place finish.

Hinchcliffe said he has no answer for his hometown blues.

"When I was sitting there in the tires I was thinking: ‘What do I have to do to catch a break here?" he said.

What depressed him even further was the fact he genuinely believed he had a car good enough to win.

"It is such a shame because (between races) the team did such a good job making significant changes.

"The car was on rails … we were able to pick up a couple of positions right away on the start.

"We were all over Sebastien (Bourdais) and it was only a matter of time before we were able to get him."

What is left now for Hinchcliffe is to rescue his season with some good results, hopefully a win over the final four races.

"We have had some strong results in Detroit and Houston and I think we were more competitive than we showed in Iowa," he said of his season.

"We still have some tracks left where we should be strong.

"We have to look at finishing the season as if we were going for the championship." Toronto Sun