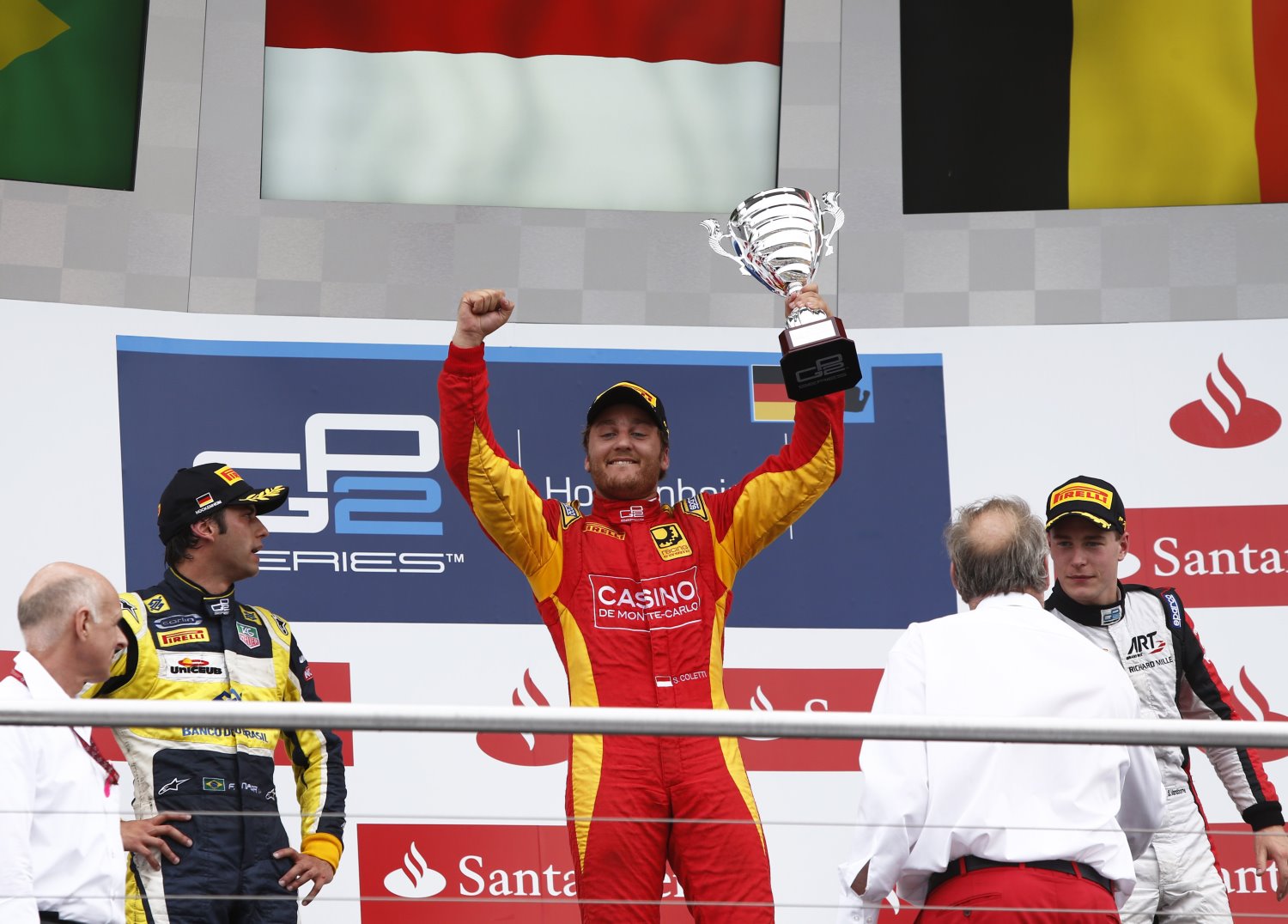 Stefano Coletti rolled the dice when a brief but fierce downpour just before this morning’s sprint race threw everyone's race plans out the window: with the track still wet, the conservative choice was to start on wet tires, but the Monegasque driver and the Williams tester Felipe Nasr were among the few drivers to take a gamble on slicks, one which paid well when the pair finished 1-2 ahead of McLaren test driver Stoffel Vandoorne.

At the start the advantage was heavily towards the conservative choice: poleman Nathanael Berthon easily took the start with the rest of the top 4, including Nasr, struggling to get off the line: Coletti had a comparatively good start but was still swamped as Jolyon Palmer, Mitch Evans and Marco Sorensen stormed past, with Palmer slightly wide at turn one and dropping behind the pair as Johnny Cecotto and Stephane Richelmi came together: the latter’s car caught fire, prompting a safety car period.

Evans made short work of Berthon at the restart but was clearly on the wrong set up: the New Zealander was unable to do anything to stop Vandoorne at the hairpin next time round and, dropping 2 seconds a lap, soon fell back threw the field. But with the track drying out the question was which lap should they come in? Palmer opened the door by coming in on lap 10, just before Coletti claimed the fastest lap to make it clear that the time was now.

A safety car for a beached Takuya Izawa gave teammate Vandoorne a perfect window to pop in for slicks, emerging with Sorensen just behind the last wet tire stragglers on track, who disappeared as the race went live: Coletti was just behind the pair at the restart and made the most of his warmer tires, and familiarity with the conditions, to blast into the lead next time round, with Nasr following suit on the next lap.

For the remainder of the race Coletti and Nasr had a private battle for the win, with the pair swapping fastest laps between them, but the Monegasque driver held the gap of just over a second all the way to the finish line, with Vandoorne the best placed of the wet tire starters rounding out the podium. Another fine performance from Sorensen saw him finish P4, ahead of a fierce fight between Jon Lancaster, Palmer and Alexander Rossi, with Adrian Quaife-Hobbs claiming the final points position behind them.

Palmer still holds the lead in the drivers’ championship on 168 points to Nasr’s 127, with Cecotto on 100, Coletti moving up to 96, Evans on 92 and Vandoorne on 86 points, while in the teams’ championship DAMS lead on 209 points to Carlin on 193 points. Racing Engineering are third on 125 points, three more than Trident ahead of next week’s round at the Hungaroring.