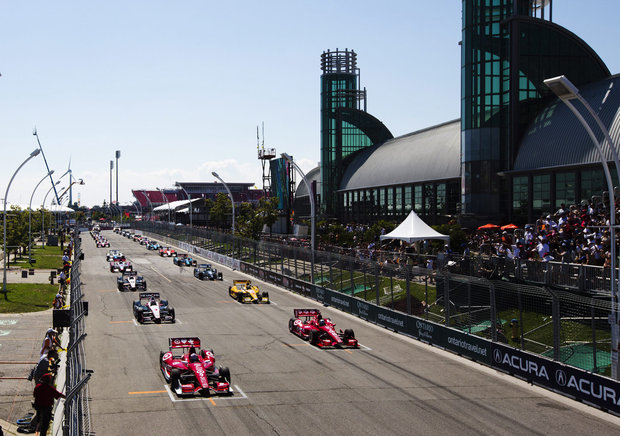 Briscoe broke his wrist in the first race of the doubleheader at the Honda Indy Toronto last year, an injury that kept him from competing in the second race and later led to surgery.

Three years ago Briscoe also made a visit to a local hospital, albeit with a less serious injury, after a wheel-to-wheel incident with Tony Kanaan.

"I've still got a little lump on my hand from that," said Briscoe.

Just finishing the claustrophobic 85-lap, 2.81-kilometre street course at Exhibition Place in one piece is difficult enough for IndyCar drivers. Surviving two races, which run Saturday and Sunday, on a crash-prone track requires plenty of strategy and a bit of luck.

Briscoe has seen a bit of everything at the race.

The 32-year-old Australian driver for Chip Ganassi Racing finished second when the race returned from a hiatus in 2009. But the following year he was bumped off the track by Graham Rahal and finished two laps off the pace in 18th.

In 2011 Briscoe finished seventh and earned his first hospital visit for the trouble. A collision in 2012 with Dario Franchitti ended Briscoe's day, and last year he broke his wrist after failing to let go of the steering wheel when Justin Wilson bounced off a wall and smacked into Briscoe and Charlie Kimball.

Like most drivers, Briscoe is still trying to figure out how to win Toronto.

"You never know," he said. "Everyone will say qualifying at the front of the track position is very important, but the way these races have been working out this year you really just got to be heads up all the time, get that strategy right, work the tires the right way, especially the red soft compound tires.

"And then, with a track where accidents are going to happen, you don't want to be caught out on track when the yellow comes out because the pits close and then you're hosed."

There are plenty of spots for potential accidents on the 11-turn track. Two in particular stand out to Briscoe: a tight right at Turn 1 and a deceptive Turn 3 hairpin where drivers often think they have more room than they do at the end of a long straight.

Briscoe has been guilty in the past of being one of those drivers. His first injury in 2011 came at Turn 3 when he tried to pass Kanaan on the inside and bounced the Brazilian out of the race.

"I think if there's any track where you just have to give a little extra room it's there in Toronto," said Briscoe.

For Marco Andretti, who finished fourth and ninth last year, the final four turns are just as hard to get out of.

A bumpy Turn 8 leads into three final high-speed turns. IndyCar teams set up their vehicles differently depending on the track and weather conditions, and the high speeds of Turns 9-11 don't mix well with the street-car setup usually employed in Toronto.

"You normally just have to hang onto the car that's probably not going to do what you want through there, so that normally makes it tough, but it's character, it's fun," said Andretti.

Complicating matters is a grueling weekend set in the middle of a busy schedule.

Toronto caps a set of races that has been going on at least once every weekend since June 28. Drivers get just two 45-minute practice sessions Friday. The weekend is much busier, with qualifying held in the morning before the afternoon race Saturday and Sunday.

Briscoe, who is juggling the IndyCar season with life as a new father since daughter Finley was born in December, said the event can be unforgiving and require hard work.

"I mean these races are so physical," he said. "Especially in the middle of summer when it's so hot. … You just really need to be on it, and on it quickly, and on the physical side it's just all about staying hydrated, really."

Unlike most street races, however, a good qualifying result in Toronto doesn't guarantee a checkered flag. Andretti describes the race as "attrition."

"It's not as track-position dependent, meaning you don't have to lead right from the start to win at the end," he said. "If you have something happen, if you qualify bad, which unfortunately I have in the past, it gives you a shot at it because there's just so much carnage that goes on."

Even some legendary family experience isn't much of an advantage for Andretti in Toronto. His father and boss, Andretti Autosport owner Michael Andretti, won Toronto an unmatched seven times during his career.

But his father's victories between 1989 and 2001 don't give Marco Andretti an upper hand. He has yet to step onto the podium in Toronto.

"I've been strong at other places, I don't have seven wins at one place, but you can't explain why. It just happened that way," said Marco Andretti. "If you look at his track record, he was probably more dominant at Indianapolis and he has no wins there.

"So sometimes it just clicks, sometimes it doesn't. He did nothing different here than he did anywhere else. That's the tough part. A lot of it I just have to learn by going out and doing it."

Winning both races in Toronto will be crucial to the overall championship. Last year Scott Dixon swept the doubleheader en route to winning the series title.

This year, Helio Castroneves holds a slim lead at the top heading into the race with 471 points. There are at least 100 points available in Toronto, meaning the championship won't be won but could be lost this weekend as the season draws to a close Aug. 31.

Andretti, who is seventh overall with 337 points, said his season will be decided in Toronto.

"For me in particular this is the weekend if I want to win a championship. This is the make or break," he said. "You know, if I come out of here fourth in points then I'm still in striking distance but if something goes wrong then I'm done. This weekend's huge for me, for sure.