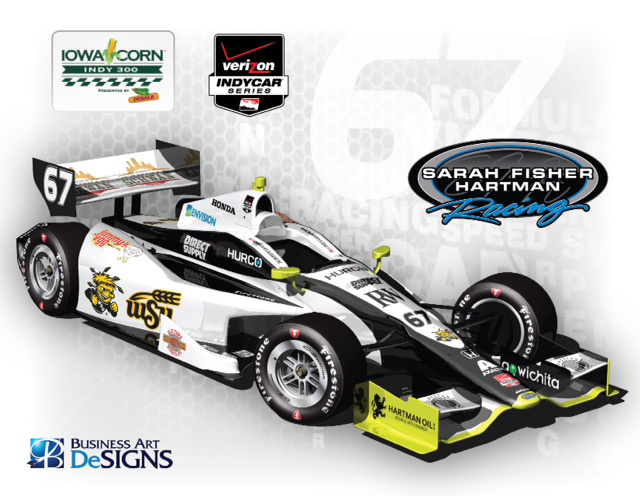 Josef Newgarden raced in the No. 67 SFHR entry, featuring Wichita State University (WSU) and WuShock logos. The car was sponsored by WSU Athletics and the Office of Research and Technology Transfer.

WSU used the sponsorship as an opportunity to give engineering students involved with the WSU Formula SAE racing team an inside look at IndyCar racing. Six students travelled to Iowa to watch the race and had two-day garage/pit passes for exclusive access to witness the pre-race preparation firsthand.

"As an amateur racing team, we gained knowledge and insight on how successful racing teams work and operate," said Scott Banman, senior in engineering.

WSU’s Media Resources Center was also be at the race sharing the student experience via WSUTV social media on Twitter,YouTube, Instagram, Facebook and at http://wichitastate.tv.

"This is an incredible experiential learning opportunity for the students," said Tonya Witherspoon, director of WSU’s Media Resources Center. "We're grateful to have the opportunity to capture the excitement through WSUTV."

This is the second year that WSU has sponsored a car through Sarah Fisher Hartman Racing. WSU was joined by additional sponsors including the House of Schwan, Hartman Oil, Envision, GoWichita, Jimmy’s Egg and Mort’s Martini & Cigar Bar.