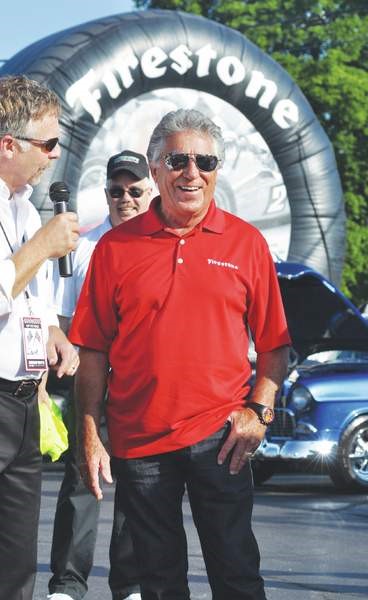 The Verizon IndyCar Series is as good as it's ever been. But there's a whole new generation of racing fans who need to know about it. That's how Mario Andretti sees it.

Andretti, 74, was in Beaver Creek Thursday morning to sign autographs and help celebrate the 20th anniversary of business for Murphy's Autocare, located on 3815 Dayton Xenia Road. Complete with police escort, Andretti drove into the Murphy's lot on a motorized go-kart amid cheers from a host of area fans and dignitaries gathered for the occasion.

He spent a good portion of last weekend moving a little bit faster. Andretti was busy propelling race fans around the Pocono Raceway at almost 200 mph in a two-seater IndyCar racer. He truly enjoys scaring the beejeebers out of his passengers.

"We've had a few people who just lose it. (He laughs) I've had a half dozen or so of those over the years. You know, which makes it a special day. A bit embarrassing for them, but fun for me," he said with a wry grin. "There's a panic button for the passenger to hit, which shows a red light on my steering wheel to tell me that they're worried … and I ignore it. (Laughs). Once you're in the cockpit, you've gotta go with me. Sometimes people get a little nervous, which is good. I like that actually. That's the whole idea."

A four-time season champion in IndyCar racing and the 1969 Indianapolis 500 winner, he's the only driver who can say he's won IndyCar's Indy 500, NASCAR's Daytona 500 and a Formula One world title. Andretti raced when IndyCar racing was the top echelon of motorsport. But he says today's Verizon IndyCar Series is still feeling the effects of an ugly split in 1995.

The split created Championship Auto Racing Teams (CART) and the Indy Racing League (IRL), and it splintered open-wheel racing's fan base along the way. The two series eventually reunited to form the present Verizon IndyCar Series in 2008, but the damage had already been done.

"I was hoping that by now, since it's one series again, it would have regained more popularity. But I think the split was for too long, and we lost a lot of our fan base. We almost have another generation coming now," Andretti explained while dutifully signing autographs for a long line of fans. He motions toward the line.

"Sure, we have hardcore fans. But even still, the newer fan base has to be re-educated to appreciate what the IndyCar Series is all about. Right now, I think the product is really good. I think the races are the best I've ever seen, with the nature the cars are and the way it is regulated."

Andretti says now is the time for the series to toot its own horn a bit.

"Once you've got the product, you've got to feel pretty positive about the series. It's just good racing, that's all there is to it. The talent in the field is deep, it's good! There's a strong international contingent, which is fine. Golf has that. There's nothing wrong with that. We've gotta keep hammering, that's all," he said.