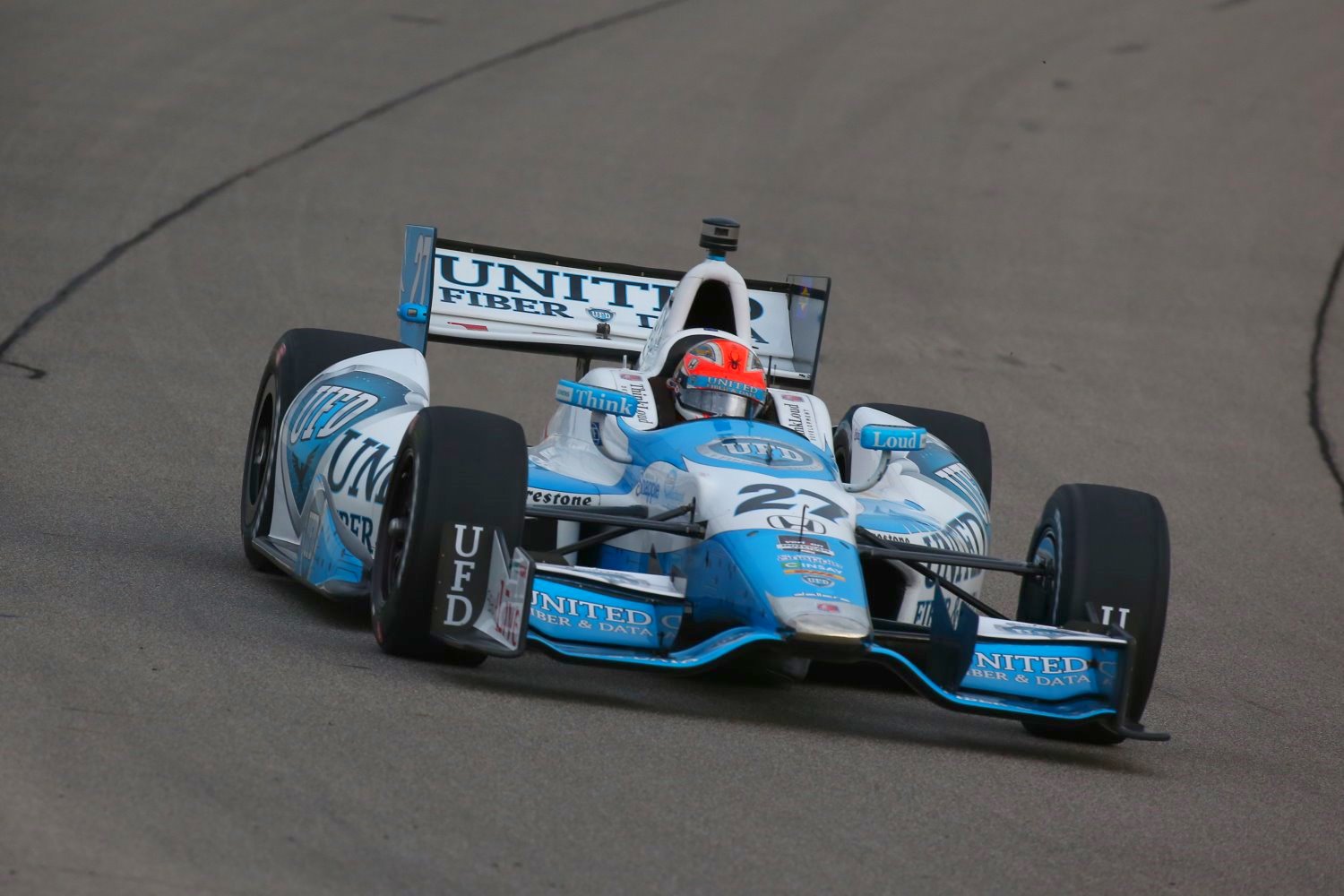 It's about 9:30 p.m. Iowa time. It's been a pretty long day, so I'm going to ask that you forgive the lack of a creative intro, as I conclude Friday at Iowa Speedway by hitting on a few noteworthy subjects.

Andretti Autosport's James Hinchcliffe was clearly frustrated after qualifying. Hinch had been quick in both practice sessions, but was only able to post the 14th fastest qualifying time.

Of course, I reported earlier that Hinchcliffe had a car that was visibly handling well in both the high and low grooves. For qualifying the team went in the wrong direction set-up wise or as Hinch put it, "we screwed the pooch."

With said pooch screwing completed, The Mayor was reflective on his season, noting that the team has had speed at times, but been unable to cash in on strong results. Of course, Hinchcliffe was taken out as part of the Ryan Hunter-Reay-Josef Newgarden crash at Long Beach. He was running in the top-five at Indy before he tangled with Ed Carpenter, and led the most laps at Houston Race 1 a few weeks ago, before an untimely caution dropped him in the running order.

Hinchcliffe is due for a strong finish, and as we noted in our Wednesday Iowa preview, this is a track where drivers will be able to race their way to the front. Despite the less-than-stellar qualifying effort, Hinch should have the car to be a factor tomorrow evening.

Those were the finishing positions one year ago from Chip Ganassi Racing drivers Charlie Kimball, Scott Dixon, and Dario Franchitti respectively at Iowa. Yes, two weeks before the team's 1-2-3 finish at Pocono last year, and a mere few days before the now famous test at Sebring, Team Ganassi endured an AWFUL weekend at Iowa.

What a difference a year makes.

It was also interesting to hear the comments from Kanaan in the post-race press conference. The Brazilian noted that "the chemistry of the team has changed since we lost Dario."

What I found interesting about that comment is that there have been whispers not that things were catastrophic or that the team was a dysfunctional mess, but that things were clicking per se at Team Ganassi throughout the 2014 season. And the most-oft cited reason has been the retirement of Franchitti. Kanaan essentially acknowledged as much.

That said, I would say this banner day for Team Ganassi came out of nowhere but…

I was speaking with Ganassi Team Principal Mike Hull about a half hour before qualifying. Hull was talking to me about how a four car team works together and essentially synergizes its efforts using the abbreviated day at Iowa as a backdrop. I'm not sure exactly how or when I will share that information, but it was very intriguing and I must say far from what I expected.

However, after what happened in qualifying the most interesting part of the talk came as Hull and me were wrapping up our discussion. He said something to the effect of (and I'm paraphrasing) "I like our chances here," when talking about the qualifying session. Turns out he had good reason to.

I've asked around a little about how ticket sales are going for the race, and things have been pretty mum. I'm not sure if that is good, bad or indifferent. The grandstands for the recently concluded Camping World Truck Series race appeared to me less than half-full. The only event on the card for tomorrow evening is the IndyCar race.

I'll double-check this tomorrow, but I think tomorrow night's race can be done on three stops.

Was blown away by Iowa Speedway. Now, some drivers have pointed out that data from road course testing was transferrable to Iowa. When one reporter presented Aleshin this information, the Russian laughed and said very simply, "no."

Andretti Autosport rookie Carlos Munoz qualified fifth. Munoz, of course, finished third in Houston Race 1 two weeks ago before another third-place last week at Pocono. And for the second straight race, the Colombian was the fast Honda qualifier.

Depending on how Honda performs relative to Chevy in race setup, Munoz could be a contender for the win tomorrow.

Check back in tomorrow for updates from Iowa Speedway.