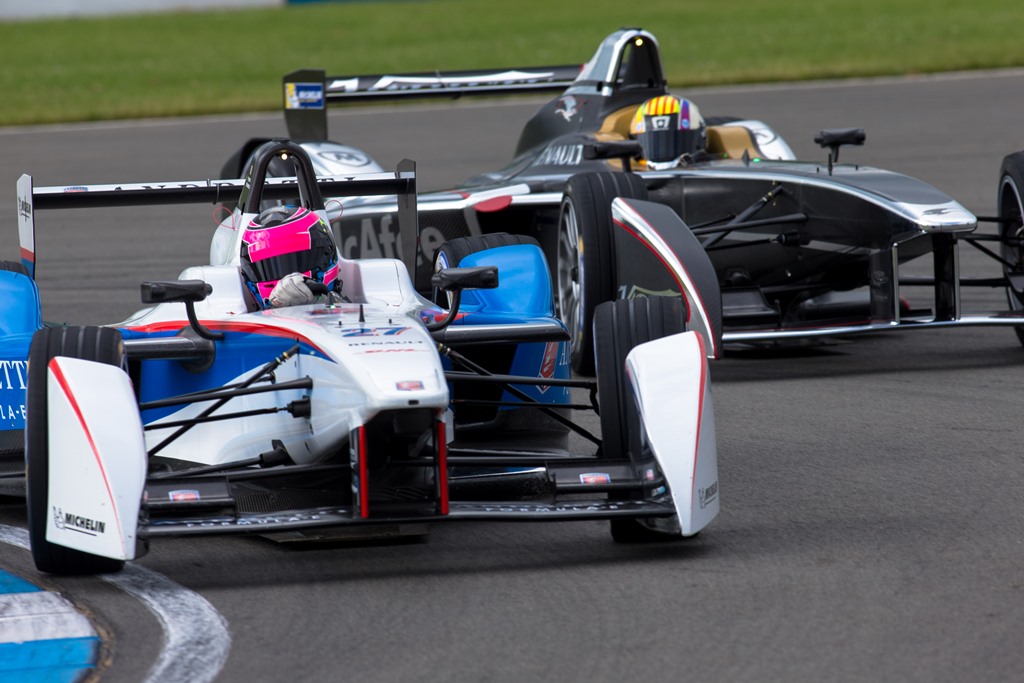 Andretti Formula E concluded its third FIA Formula E test at Donington Park in the UK today. The all-electric racing series' public open tests for 9 and 10 July saw confirmed driver Franck Montagny in the No. 27 Spark-Renault SRT 01E with Andretti Rallycross' Scott Speed once again taking up driving duties in the No. 28 machine on the 2.498-mile (4.020-km) circuit.

"I think that the test went pretty well. Franck (Montagny) and I obviously have a lot of experience between us, and I think that we work and communicate well together. All these Formula E cars are brand new and the teams are still trying to figure them out, but I feel that Andretti is definitely ahead of the average, maybe not the best out there yet, but it's an exciting time. This series is development in its purest form, and I feel really good about how the whole team's working together."

"Today we worked quite a lot on the race pace and found some interesting new things, so I am quite happy about that. We are still learning about the car and all the new technology, so we are still at the beginning of our journey. I am happy with the pace we had during the long runs; we still suffered the mechanical failure from yesterday which caused us some problems with the tires, but apart from that everything is fine. The team is doing well and it is going to get even better!"

"Yesterday was a little bit challenging for us. There were numerous power outages in the garages, but we have to give credit to the FEH guys for getting that resolved for today; we did lose quite a bit of time waiting for power to be restored. Ultimately, the day ended for Franck (Montagny) when we had a mechanical issue with the car which prevented us from completing the afternoon's running, and we know the SPARK guys are looking at it and we are sure that they are going to come up with a counter measure. With Scott (Speed)'s car we were learning how to get to grips with the brakes; it's a bit different to what Scott's used to and it took a little bit of understanding, both from the engineering and driver's side, to get the most from it. In the end we successfully overcame the challenges.

"Today was much easier in terms of the operation. We really didn't have any issues at all with the cars and had a very well thought out run plan. We didn't concentrate on going too fast too soon and getting wrapped up in the lap times. At the end of the day I think that Scott and Franck both showed very competitive pace, and were very happy with the way it went on the high power runs. We learned a lot about race running – ultimately we are here to win races and not qualifying so I think that it was a good day's testing from us. The technology behind the Formula E car is so unique that we have to be prepared to learn something new every time we go out, and that's what makes it really interesting."