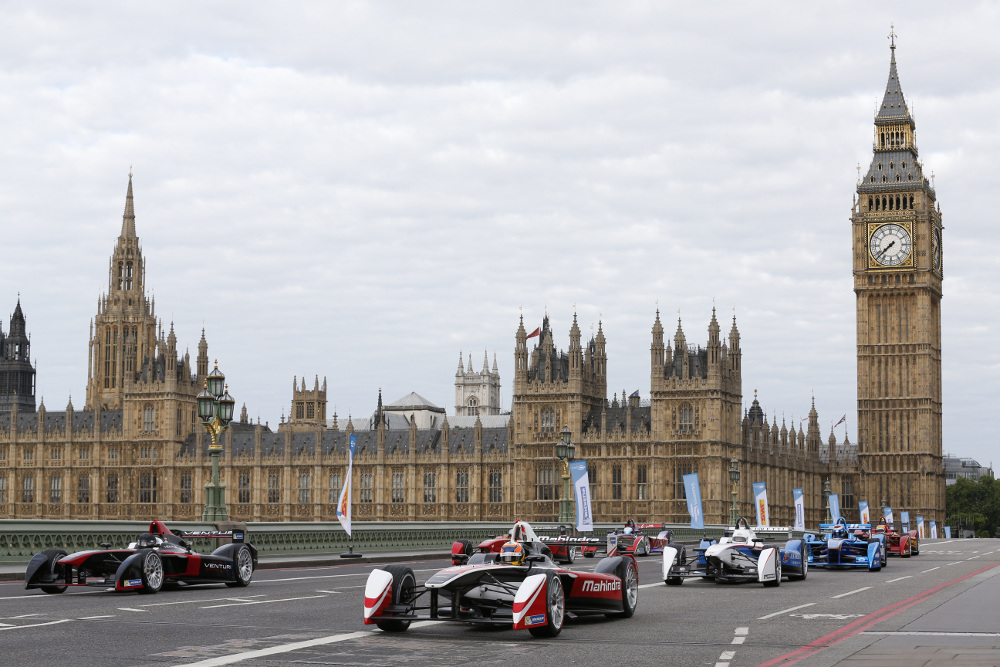 The evening began with a video message from FIA President Jean Todt before guests were treated to exclusive footage of the team’s Spark-Renault SRT_01E Formula E cars driving on Westminster Bridge, together with the backdrop of the iconic Houses of Parliament and Big Ben. The incredible scenes were shot the day before to provide fans with a taste of what a Formula E street race will look and sound like .

Formula E’s CEO Alejandro Agag said: "Tonight has been a very special milestone in the journey of Formula E and I’d like to thank everyone for their continued support. As our first race draws closer, it’s fantastic to see the new era of motorsport come to life. Since September when we first unveiled the car, we’ve come such a long way and now have circuits, teams, drivers, broadcasters, and of course our founding partners; Michelin, Tag Heuer, Renault, Qualcomm and DHL – who delivered the cars here today. Next month will see our first test days where we already have 3,000 members of the public registered to come and see, but also, hear what we believe will be the future of motorsport. We are very excited about the start of the season and very pleased to be taking further steps forward by announcing new partners, drivers and of course our London race venue."

Battersea Park revealed as London race venue…
One of the biggest announcements of the evening was the venue for the London race, or ePrix, the season finale for the inaugural Formula E series scheduled for June 27 2015. The Deputy Mayor of London Sir Edward Lister revealed together with Alejandro Agag that the chosen location for the race would be within the grounds of Battersea Park in the Borough of Wandsworth, South London, with further details to be announced in due course.

The Mayor of London, Boris Johnson, said: "Fast, fun, and no doubt furious, the FIA Formula E Championship race in London is set to provide an awesome addition to the capital's sporting calendar. The atmosphere will quite literally be electric and Battersea, which is already booming with the buzz of regeneration, will be alive with the excitement that this new, world-class event will no doubt spark. Hosting the championship final of this all electric race is a fantastic feather in our city's sporting cap. It shows that there is great confidence in London's ability to stage the biggest and the best global sporting events, which play such an important role in boosting our economy and our international reputation."

Michael Fallon, Minister of State for Business & Energy, was also present during the evening to discuss the burgeoning UK motor sport industry and Formula E’s contribution to it.

Buemi & Prost sign for newly-titled e.dams-Renault…
It was an important evening for the e.dams team too, founded by Jean-Paul Driot and four-time Formula One World Champion Alain Prost. The French team announced that Renault, also a Founding Technical Partner to the series, would become its title sponsor, renaming the team e.dams Renault. The outfit also revealed its driver line-up with former F1 driver Sébastien Buemi and Alain’s son Nicolas Prost. This sees the return of a ‘Prost vs. Senna’ battle following Mahindra Racing’s signing of Bruno Senna, nephew of the great Ayrton.

Alain Prost, co-owner of e.dams-Renault and ambassador for the Renault brand, said: "Jean-Paul Driot and I are delighted to be associated with Renault in this new adventure. The choice of Renault as a major partner was a natural step because of the exceptional record it has carved out in motorsport, as well as its unique expertise in the field of electric vehicles. Personally, I am thrilled by the idea of working with Renault on such an ambitious project again and by the prospect of writing a new chapter of our association.

"We are actively preparing for the first races of the season. This week’s test at Donington Park is the next step in that process and it will be followed by a busy summer in order to be ready and competitive for the first ePrix in Beijing, on September 13. It’s an enormous challenge because this championship is completely new, both in terms of the technology it features and also the race formats. These are very exciting times."

Patrice Ratti, President of Renault Sport, said: "This partnership with e.dams-Renault will allow Renault Sport to have an even closer involvement with the FIA Formula E Championship. The series will be unique and takes motorsport into a new age. Renault is proud to be playing a part in the adventure which stands out as a new challenge. We know Alain and Jean-Paul very well and their experience and record make them high-quality partners. Our involvement with e.dams-Renault will play a core role in our participation and in our Formula E development work."

The Auto GP race-winner said: "I’m very pleased to join TrulliGP and I am very honored to be part of the FIA Formula E Championship. I really do believe that this series can help attract people to use electric vehicles and help care for the future of the environment. I’m now looking forward to testing the car to start this new challenge."

Jarno Trulli added: "Michela is a very talented driver with a natural skill. I was impressed by her recent results considering the very limited time she has spent in single-seaters. I’m extremely happy to share my long Formula 1 experience with Michela to make our team successful. I’m convinced that Michela is an up and coming star, the one to watch for this season and the future."

Formula E & BMW…
Formula E also announced that it is finalizing a partnership with leading German automobile manufacturer BMW to become the official vehicle supplier for the series. The agreement would see BMW supply a fleet of its highly advanced fully-electric and hybrid vehicles to be used as course, medical and VIP cars at all race events. Two of the manufacturer’s vehicles – the all-electric BMW i3 and the hybrid BMW i8 – which will be used at the events were also unveiled to guests.

Jorg Reimann, Vice President BMW Brand Experience, said: "We have watched with great interest the continued growth of the new FIA Formula E Championship and the potential it has to significantly increase the interest in sustainable mobility. As a global manufacturer at the forefront of innovation and technology, BMW regards Formula E as a great platform in which to showcase our range of fully-electric and hybrid vehicles and to align our common goals. We are working on an agreement to finalize this partnership."

Fans to give favorite driver power boost…
The championship’s interactive Fan Boost was also officially launched during the evening which will allow fans to vote for their favorite driver giving them an extra ‘speed burst’ during the race, helping to aid overtaking. In a change to the first proposed format, the top three drivers with the most votes will each receive one boost, temporarily increasing their car’s power from 133kw (180bhp) to 200kw (270bhp). Votes can be cast online at www.fiaformulae.com and via the official Formula E app (which launches September 1) with voting opening from the start of the previous race and closing shortly before the start of the race.

Those voting online will be able to select just one driver, whilst those using the app will get five. The online voting system (iframe) will also be hosted on social media platforms such as Facebook, Twitter and Sina Weibo. Votes can be changed any number of times up until the closing date. Every time a vote is placed it can be shared forwards as a hashtag and appear in a timeline on Facebook or Weibo generating further social interaction.

Formula E to benefit local schools…
The evening concluded with the news that Formula E is to partner with the Greenpower Education Trust, designed to promote sustainable engineering to young people. The project sees students from 10 local schools designing and building their own electric race car, which will then race on the full Formula E race track at five of the 10 events, beginning in Buenos Aires on January 10 2015. With their experience mirroring that of the Formula E teams and drivers – from the starting grid to the podium – it’s hoped the initiative will inspire young people to embrace sustainable mobility as well as being a once-in-a-lifetime experience for the children. The race will focus on the driver’s energy efficiency as well as speed, and each participating school will be given 200 free tickets to come and cheer on their fellow pupils as they search for the equilibrium between these two.

Jeremy Way, CEO of Greenpower, said: "Formula E is the most exciting motorsport innovation in a generation and could not only revolutionize the way people view the sport, but also greatly enhance the advances being made in the development of electric and sustainable automotive engineering. The values and objectives that underpin Formula E mirror exactly Greenpower’s own aims; we have been promoting the advancement of sustainable motoring and engineering in the UK's schools and universities for 16 years and we are delighted that we can now take our initiative on to a global stage."

The evening concluded with live music and entertainment with teams and drivers now focusing on preparing for the start of pre-season testing which begins at Donington Park on July 3 – one of five test days open free of charge to the public.

Formula E is the FIA’s new fully-electric single-seater championship designed to appeal to a new generation of motorsport fans, whilst accelerating the interest in electric vehicles and promoting sustainability. Competing entirely on city-centre circuits – with races in China, Malaysia, Uruguay, Argentina, US, Monaco, Germany and the UK – it uses cars capable of speeds in excess of 150mph (225kph). Its 10 teams feature some of the leading international names in motorsport including Alain Prost and Michael Andretti, along with high-profile environmental supporters including Sir Richard Branson.