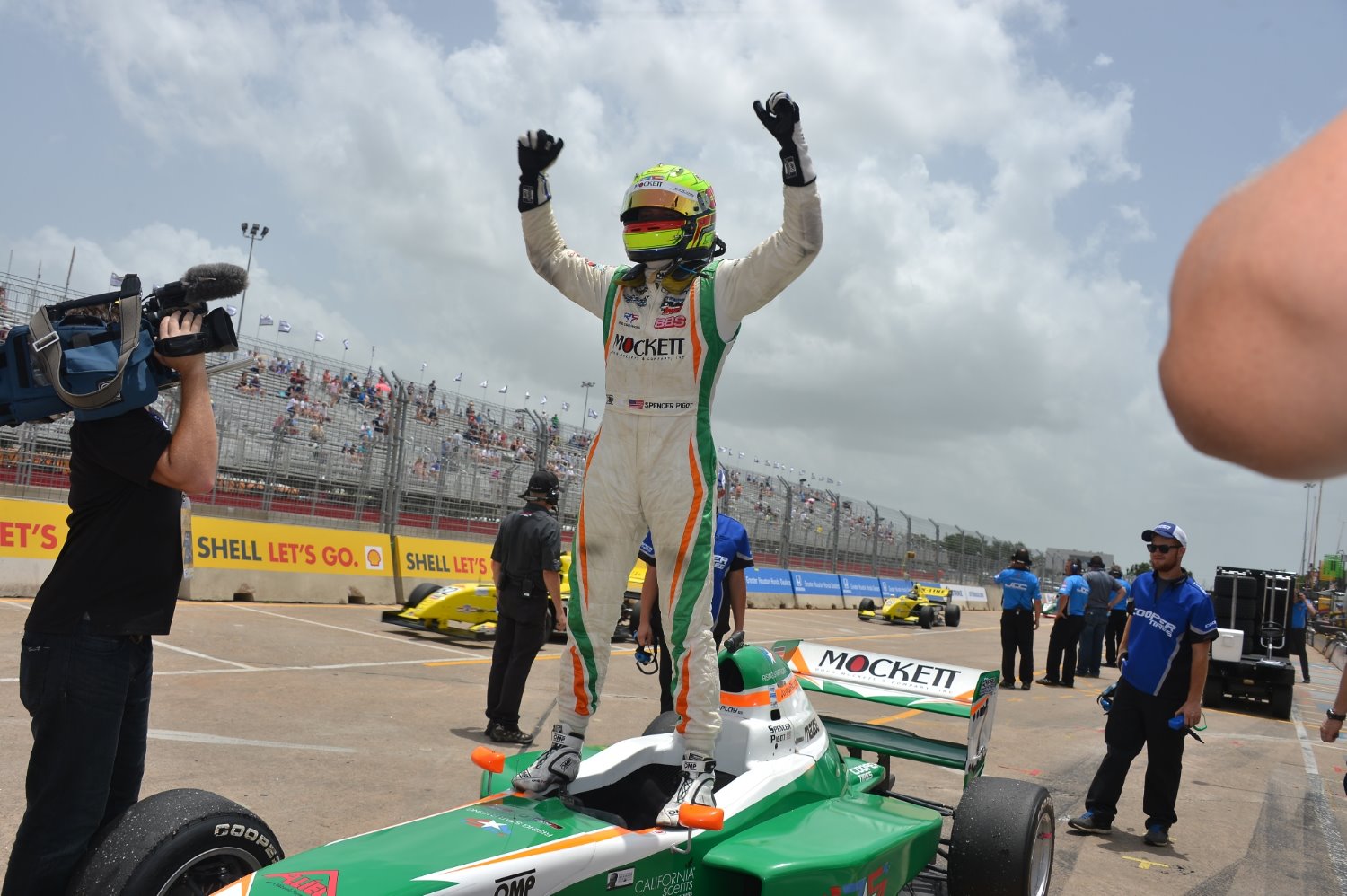 Spencer Pigot bounced back from a series of misfortunes to score a commanding victory in today's second leg of the Allied Building Products Pro Mazda Grand Prix of Houston Presented by Marlin CNG Services. Starting second on the grid, Pigot, 20, from Orlando, Fla., made an explosive start, then dived to the inside of polesitter Garett Grist under braking for the tight chicane at Turn Two on the unforgiving 1.7-mile MD Anderson Cancer Center Speedway at NRG Park. He remained under pressure from fellow American Neil Alberico for the first dozen or so laps, then edged clear to win the 30-lap race by almost four seconds.

The victory, Pigot's fifth of the season for Juncos Racing, moved him back into the lead of the Pro Mazda Championship Presented by Cooper Tires after yesterday's winner, Scott Hargrove, exited the race on the first lap following an incident in Turn Three. The result also enabled Juncos Racing to move back into the lead of the Team Championship with five rounds remaining in the 14-race season.

After Pigot's move for the lead on the opening lap stacked up the field, Hargrove thought he saw an opportunity to take second place at Turn Three. Unfortunately, his lunge to the inside resulted in heavy side-to-side contact with Grist, who was assessed a penalty shortly afterward for avoidable contact. Hargrove's Cape Motorsports with Wayne Taylor Racing entry reared up onto two wheels before crashing back to earth and out of the race.

Fellow Canadian Grist (Andretti Autosport) was able to continue in third, but only for a couple of laps before pitting to serve his drive-through penalty. He resumed in 15th and thereafter drove well to claim ninth at the finish of the all-green race held in exhaustingly hot and humid conditions.

Alberico (Cape Motorsports with Wayne Taylor Racing), who had been taken out on the second lap of yesterday's race, profited from the early drama today to move from sixth on the grid to second, where he remained until the finish. Alberico posted the fastest race lap – a new track record – for good measure.

Grist's teammate, Shelby Blackstock, couldn't match the leaders' pace in third and remained under intense pressure for almost the entire distance from Ryan Booth (JDC MotorSports) until the latter's rear wing mounting failed in the closing stages. Booth somehow managed to hold onto fourth ahead of a fast-closing Nicolas Costa (Team Pelfrey), who charged back through the field after narrowly avoiding two separate incidents on the first lap and falling to the tail of the field. Costa also claimed the RePlay XD Move of the Race Award for his pass on both teammate Dalton Kellett and local driver Clark Toppe (JDC MotorSports), who posted a fine drive in only his second Pro Mazda start, in Turn 10 with six laps remaining.

Blackstock claimed the Quarter Master Hard Charger Award after rising from 10th on the grid to third. Additional contingency awards included the PFC Award and customized Race Energy charger – the official battery of the ladder series – to the winning team, Juncos Racing; and the Staubli Award to Booth.

Pigot, after losing the series points lead yesterday, now holds a 17-point advantage, 225-208, as the Pro Mazda Championship Presented by Cooper Tires moves on to the Mid-Ohio Sports Car Course for Rounds 10 and 11, once again in conjunction with the Verizon IndyCar Series, on August 2/3.

Spencer Pigot, #7 Doug Mockett & Company/Rising Star Racing/Vitamin-D Pro App/California Scents (Juncos Racing): "It's been a rough patch for us the last few race weekends. Even coming out here on Friday, we were really off the pace back in eighth, ninth, 10th position – the whole team. We just kept working harder and harder and looking over every area where we could improve the car and improve our driving. Slowly but surely we made our way to the front row yesterday and led the first half of the race but it was a crazy race with all the rain. We were forced to the back of the pack in the pits. We came out today with the same idea – we lost the points lead so we had to come out and win the race. It was a great day for the points and a great day for the team. Unfortunately, a couple of my teammates had a little bit of bad luck but I am very happy with the way today went. Neil [Alberico] and I have a mutual sponsor in Rising Star Racing and it's great to be up here one-two for them."