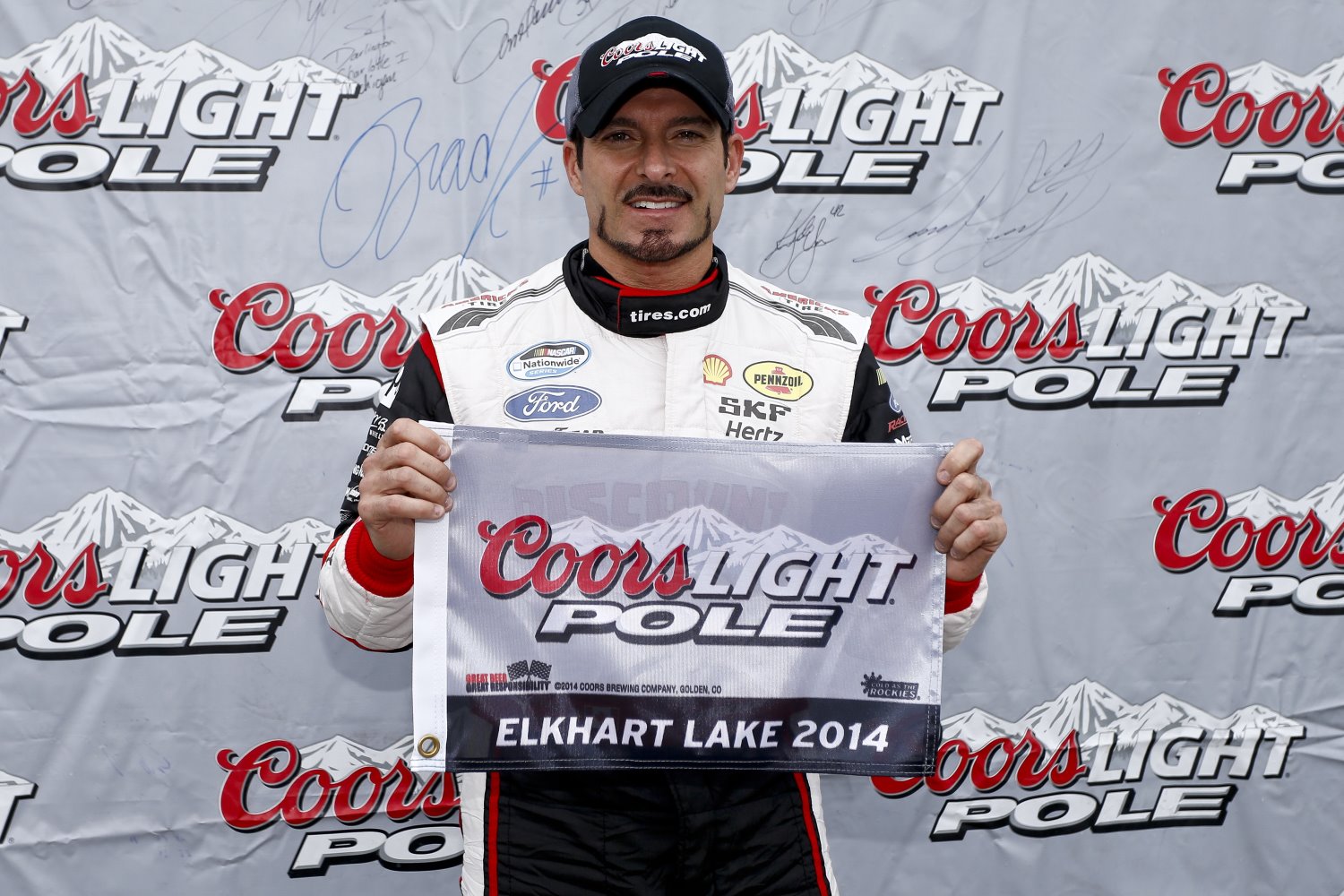 UPDATE Correction: The article below on the Nationwide race at Elkhart Lake says that there have been only two other NASCAR races in the rain, both Nationwide races. In February 1972 the Citrus 250 race also included rain, with rain tires planned in advance, and used when it started to rain at Daytona.

Brendan Gaughan survived two early off-track excursions and a race in which much of the second half was contested in rain as cars rode on wet weather tires to win Gardner Denver 200 Fired Up by Johnsonville NASCAR Nationwide Series race at Road America.

It was the third time in NASCAR history — all on road courses and all on the Nationwide circuit — that a race has been run in rain. The other two were in Montreal in 2008 and 2010, also on a road course (Circuit Gilles Villeneuve).

Racing in the rain ignited something in Gaughan that helped overcome and forget his early misfortune and go on to earn his first career win on the Nationwide circuit in 98 starts. He also has eight career wins in the NASCAR Camping World Truck Series.

"I love racing in the rain; it's fun," said Gaughan, who was in the 2010 Montreal race, and has driven in rain several other times in other series. "And when you're good at it, it makes it even more fun.

"I haven't smelled blood in a long time, that's something I've been lacking lately, that killer attitude. When it started to rain, even without the wiper blade, I started to smell blood and said, 'I'm coming.'

"It's fun to watch guys who haven't done it in the rain. They don't understand the rain line, and fortunately for me, I did."

Gaughan passed Chase Elliott for the lead on Lap 51 and held on for the two remaining laps to win.

Gaughan beat runner-up Alex Tagliani by 0.820 seconds in a green-white-checkered finish that took the race to 53 laps, three more than the scheduled 50. It appeared it would be Tagliani's race to win, as he was leading in the closing laps when he ran out of fuel on lap 49.

Just seconds before, a caution flag was thrown when Justin Marks also ran out of fuel. Just past the pit entrance when his car stopped, Tagliani was able to roll his car down the downward sloping frontstretch, and his crew pushed him into his pit stall. He took on fuel and switched from rain tires back to slicks and proceeded to roar through the field, restarting 23rd and ending up second three extra laps later.

Such a tough defeat might be hard for some drivers to swallow, but Tagliani took the loss in stride.

"It was pretty intense," Tagliani said. "The wet was tricky, but obviously we were good. Maybe I threw a bad spell on myself because I said it was impossible that I was going to win this race, like something's going to happen, and then on the white flag, something happened (ran out of gas).

"It's what it is. It's not in the cards. You have to be quick, you have to have a good car and it has to be in the cards, and if it's not, you just have to take whatever comes to you."

Tagliani came into the race hoping to be the fourth driver to win from the pole in the last five Nationwide races at Road America, but came up one spot short.

The race was put under caution on Lap 25 and NASCAR mandated all cars switch to wet weather tires two laps later. They remained on rain tires until the final four laps, when teams had the option to switch back to slicks after Marks brought out the caution.

Not only did Cassill and Yeley compete in Saturday's race, they are scheduled to be in Sunday's Toyota/Save Mart 350 NASCAR Sprint Cup Series race at Sonoma Raceway.

NOTES: Regan Smith, who finished 13th, retained his lead in the NASCAR Nationwide Series driver points standings. Sadler (finished ninth) is second in the points, 10 points behind Smith, while Elliott remains in third place (11 points back). The only drivers to make upward movement in the points in the top-10 were Brian Scott (sixth to fifth) and Cassill (11th to 10th).