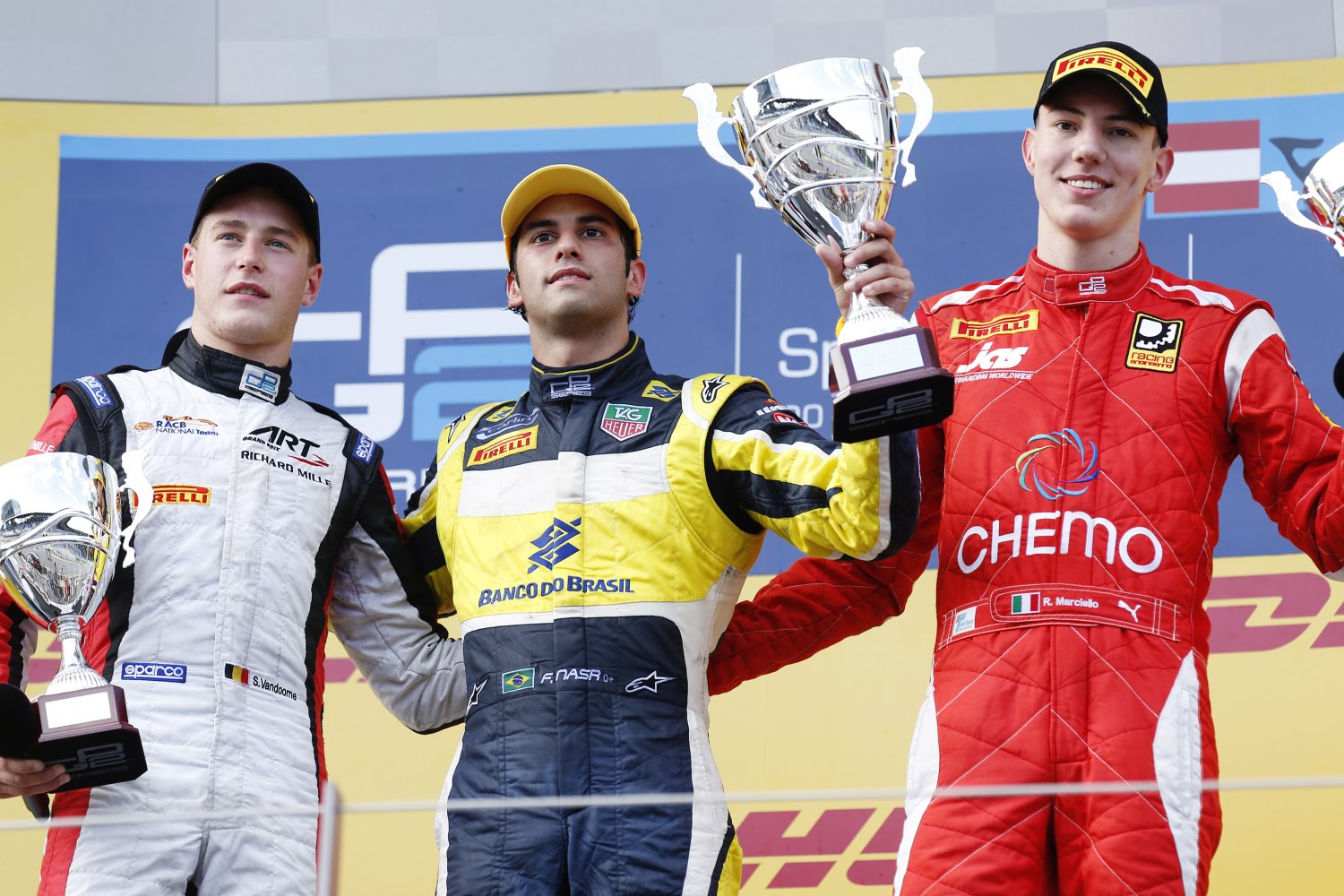 Felipe Nasr put on a crushing display in the first ever GP2 race in Austria, leading from lights to flag as his rivals floundered in his wake to claim a famous win in the Styrian alps ahead of Stoffel Vandoorne and Raffaele Marciello in today’s feature race in Spielberg.

The victory was set up at the start when the Brazilian made a storming start as the lights went out, mugging the front row of poleman Johnny Cecotto and Jolyon Palmer to lead the field into turn one for a position he was never to relinquish: the Venezuelan was unable to maintain his pace of yesterday and was soon losing positions to Stefano Coletti and Palmer in the first few laps.

Behind them Vandoorne was making up for a slow start as he fought his way through the field, with Marciello doing the same a few places back: Palmer, Vandoorne and Marciello started on the option tires, and the question in the pits was how long could they make them last? The Belgian got to lap 10 and then became the target on track for those emerging from the pits, while the Italian nursed his rubber for 12 laps and the Briton for one more before coming in, re-emerging right between Vandoorne and Marciello to spark a three way war.

Nasr was able to hold the gap to Coletti at around 2.5 seconds for most of the race, with the Monegasque driver on his pace but unable to better it: the pair, along with the lead trio of the pitted drivers, were fast while everyone else tried to hold on as best they could. Vandoorne was soon spearheading a run through the remainder of the unpitted cars, while the lead pair were able to push all the way to lap 30 before eventually coming in.

Nasr easily re-emerged in the lead, but Coletti came out just ahead of the squabble: Vandoorne out dragged him up the hill to turn 2 for his position, while teammate Marciello had finally stolen Palmer’s place at the first turn and repeated the move on Coletti next time through to round out the podium. As the laps rolled down Nasr pulled away, winning by 3.8 seconds over Vandoorne and Marciello, with Coletti gutted to finish in P4 but at least managing to hold off championship leader Palmer. Cecotto had a quiet race by himself for 6th, ahead of Mitch Evans, who mugged Alexander Rossi for P7 late in the race, while Takuya Izawa and Arthur Pic rounded out the points positions.

Nasr took a bite out of Palmer’s championship lead, with the Briton now ahead by 113 points to 84, with Cecotto in third on 61 points ahead of Julian Leal on 48, Vandoorne on 43 and Pic on 41, with more points on offer in what promises to be a thrilling sprint race tomorrow morning.