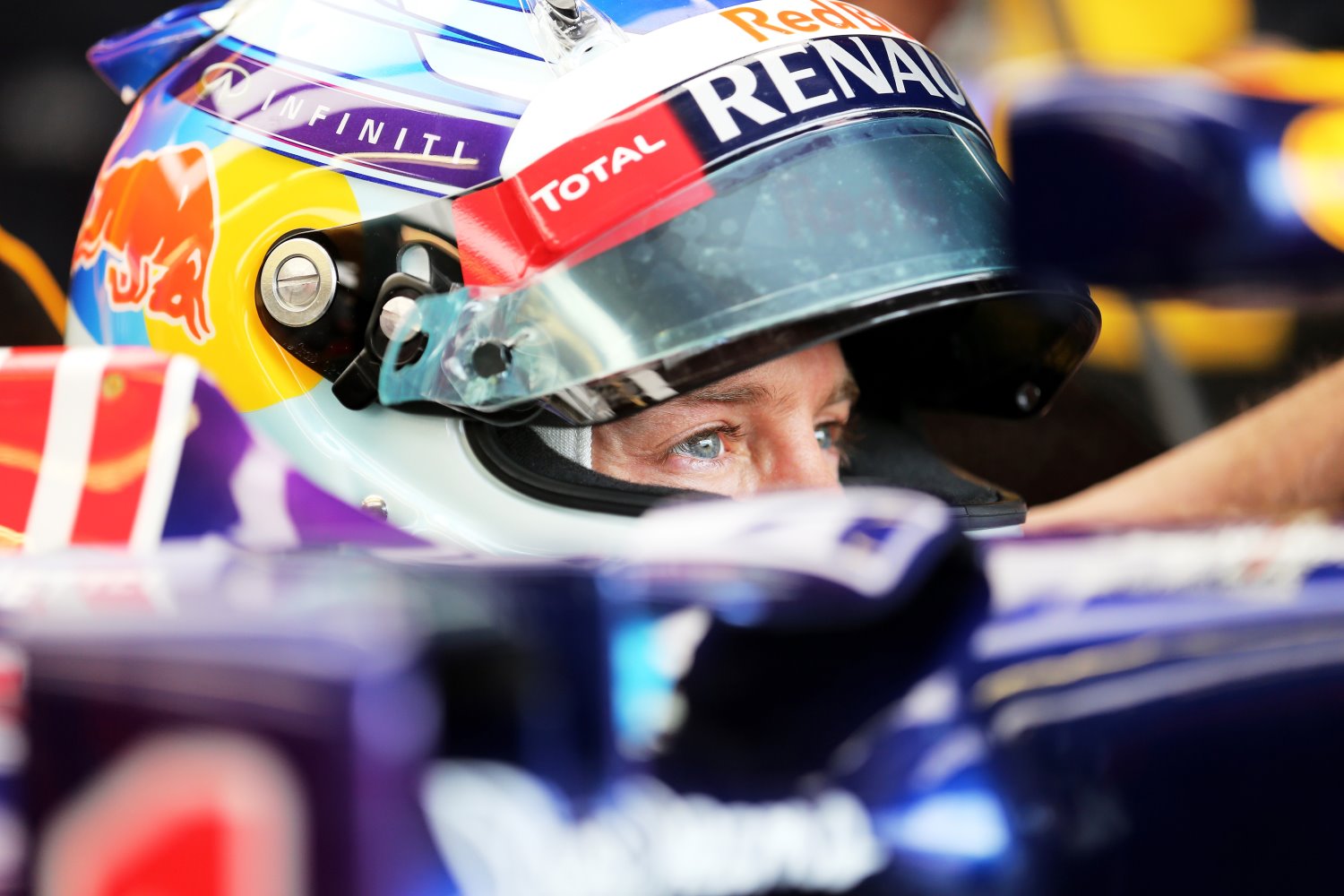 Vettel will win again – Webber
(GMM) Mark Webber has tipped his last F1 teammate Sebastian Vettel to eventually return to the top of the sport.

Off the back of his four consecutive titles, German Vettel has struggled in 2014 in the wake of Webber's retirement and the arrival at Red Bull of the younger Australian, impressive Daniel Ricciardo.

Dr Helmut Marko, the world champion team's outspoken director, has admitted to the BBC that amid Vettel's personal struggle earlier this year, he told the 26-year-old to "raise his game".

"Sebastian was complaining about having such a bad car," the Austrian said. "Furthermore, he thinks the way F1 is going is not the right one -– the cars should be monsters, not relatively easy to drive.

"With all these problems, maybe he wasn't as committed as he should have been, but that has changed," added Marko.

Webber, who had a competitive return to Le Mans at the weekend until his Porsche prototype retired, told motorline.cc that Vettel has also had a "hard time" in 2014 with "many technical problems".

"But I am not surprised about Daniel," he said. "I said before Melbourne that he would be 50:50 with Seb and everyone said I was crazy, but Seb will be there again — he just needs some time to deal with the car."

Webber said Ricciardo is clearly a top F1 driver, but whether he is as good as the highly-successful Vettel is a question yet to be answered.

"For Seb, it's difficult at the moment because Mercedes are the absolute favorites," he said.

"But as soon as Seb sees victories again, he will be back. It's the same with Fernando (Alonso). When he sees an opportunity to get the win, he is always there.

"In the first half of this season, the fact that only Mercedes could win was easier for Daniel to accept," Webber added.

Speaking separately to Fairfax Media, Webber continued: "The last few races have been pretty good to Seb, but he hasn't had the rub of the green. So he will draw from that. He knows his day will come."

Ferrari wants meeting amid F1 'worries'
(GMM) Hot on the heels of Ferrari's latest quit threat, Luca di Montezemolo has called for a meeting to discuss the future of formula one.

Last Friday, the iconic Italian team's president told the Wall Street Journal that because F1 "isn't working", Ferrari could turn instead to Le Mans by 2020.

"Of course," Montezemolo said, "we cannot do sports car racing and formula one. It's not possible."

Ferrari quickly backtracked, posting a statement on its official website that said suggesting the team is going to quit F1 for Le Mans "takes his (Montezemolo's) words to extremes".

Without doubt, however, Ferrari is giving the impression of being successfully wooed by Le Mans, where manufacturers Audi, Porsche, Toyota and Nissan already race.

The weekend's 24 hour race was flagged off by Fernando Alonso, who said: "I often speak with president Montezemolo and, while the priority remains winning again in formula one, an interesting format like Le Mans is worth keeping an eye on too."

At the very same time, reports began to emerge that Montezemolo is inviting F1's major stakeholders to a meeting at Maranello before the Italian grand prix in September.

Italy's Corriere della Sera newspaper said the invitation was sent in writing to Bernie Ecclestone and CVC's Donald Mackenzie, outlining his "worries" about the current face of F1.

Interestingly, with F1 appearing to resist the modern era of the internet, Montezemolo said Google and Apple should also be invited, as well as representatives of "new media" and "social networks".

Confirming the letter, Ferrari said on its official website that it is "not an ultimatum nor a threat", but rather a way to come up with "new ideas" so that F1 remains "the benchmark in motor sport".

Forza Rossa still waiting for green light
(GMM) Forza Rossa is still yet to receive a "formal response" from the FIA regarding its application to enter formula one.

It was reported recently that, on the heels of Nascar team co-owner Gene Haas getting the go-ahead from F1's governing body, the FIA was also set to approve the application made by a Romanian outfit called Forza Rossa.

The newspaper said Sonea is the marketing director of Forza Rossa Ferrari, the official dealer of Ferrari road cars within Romania.

"Forza Rossa did submit a dossier and now we expect a formal response from the FIA about our future participation in the world championship," Sonea said.

He confirmed that Colin Kolles, the Romanian and former boss of the HRT and Force India teams, will lead the project, but said Forza Rossa may not be the actual team name.

Many other details are also not yet known, he admitted, including the size of the budget.

There have also been conflicting reports about potential technical partners, with some saying Ferrari is the obvious engine supplier, amid rumors elsewhere of talks with Renault.

It has even been suggested that Dacia, the low-cost Romanian carmaker, could get involved.

"I cannot even mention this," Sonea insisted. "We cannot confirm or deny these rumors."

He did say, however, that reports of links to the Romanian government are untrue, as the project is "100 per cent private".

Gene Haas, F1's newest team owner, has said the world's most famous female racer "would be the dream driver" for his new foray.

He admitted, however, that the fact Nascar driver and American Patrick will be 34 by 2016 could be an issue.

"The question was about the dream driver!" Haas – who already runs Patrick in his Nascar team Stewart-Haas – told F1's official website.

"But she surely fits the bill."

Patrick told the Toronto Sun: "I agree that anything is possible, but nobody has said anything to me. I am happy where I am at right now as far as racing goes.

"I am just starting to get the hang of (Nascar) sprint cup racing.

"Out of respect for Gene, if he came to me I would certainly listen, but I am almost getting too old to start a third career," she added.

The Briton pulled out of appearing in person on a BBC chat show last Friday after suffering an allergic reaction.

"I've been taken out by a wasp!" the 34-year-old said on Twitter. "I was riding my bike yesterday and got stung between the eyes."

Button said the sting made him feel "rough, plus I look like an Avatar but obviously not the blue bit!"

Chat show host Graham Norton, sitting with actors Samuel L Jackson and Keira Knightley, phoned Button during the show and asked the F1 driver if he will be well enough to race in Austria this weekend.

"I hope so," Button answered. "That is the crazy thing. I drive around at 220 miles per hour and I get taken out by a wasp."

Pulp Fiction star Jackson, however, said he is not convinced.