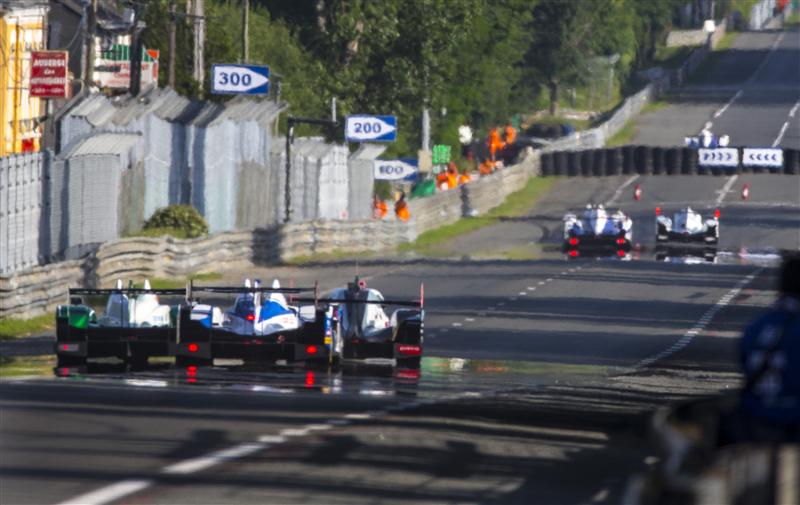 Fans of the International Motor Sports Association (IMSA) will have plenty to cheer on, in this weekend’s 82nd running of the 24 Hours of Le Mans, which starts Saturday at 9 a.m. ET.

The 56-car field includes 13 cars with at least one of 23 regular 2014 IMSA drivers. The one nearest to the front of the field when Formula 1 World Champion Fernando Alonso waves the French flag to start the race will be full-time IMSA Continental Tire SportsCar Challenge driver Tom Kimber-Smith.

Kimber-Smith starts on the inside of the 10th row in 19th position aboard the No. 42 Caterham Racing Zytek-Nissan LM P2 prototype. Kimber-Smith’s co-drivers in the No. 42 entry are IMSA Cooper Tires Prototype Lites powered by Mazda driver Matt McMurry – who, at 16 years of age is the youngest competitor in 24 Hours of Le Mans history – and past American Le Mans Series champion Chris Dyson.

In the TUDOR Championship, Ricky Taylor co-drives the No. 10 Corvette DP with his brother, Jordan, for their father’s Wayne Taylor Racing team. The brothers won in their most recent race at Detroit on May 31.

Jordan Taylor is part of a two-car, six-driver Corvette Racing team, all with full-time status in the TUDOR Championship. The No. 73 Corvette C7.R, which was qualified second on the GTE Pro starting grid Thursday night by Antonio Garcia, features a driver lineup that includes Jordan Taylor and Jan Magnussen.

The second Corvette Racing entry, the No. 74 C7.R, features 2012 ALMS GT champions Oliver Gavin and Tommy Milner, as well as Richard Westbrook, who races the No. 90 Spirit of Daytona Racing Corvette DP full time in the TUDOR Championship. Gavin qualified fourth on the GTE Pro grid.

The GTE Pro field includes two full-time TUDOR Championship drivers who already have a prestigious 24-hour race victory under their belts this year. Porsche factory drivers Richard Lietz and Nick Tandy kicked off the 2014 season with a GT Le Mans (GTLM) victory in January’s Rolex 24 At Daytona in the No. 911 Porsche 911 RSR for the Porsche North America team.

This weekend, Lietz is driving the No. 92 Porsche Team Manthey 911 RSR, while Tandy is in the team’s No. 91 entry alongside Patrick Pilet – who was the third member of the Rolex 24-winning team – and Joerg Bergmeister, who claimed GTLM victory in March’s Twelve Hours of Sebring.

For the second consecutive year, Long is sharing the No. 77 Dempsey Racing-Proton Porsche 911 RSR with Hollywood star Patrick Dempsey and Joe Foster in the only all-American driver lineup at Le Mans. They finished fourth last year in the GTE Am class after leading in the overnight hours.

Long qualified eighth in the GTE Am class, one spot behind the No. 90 8Star Motorsports Ferrari 458 Italia co-driven by regular TUDOR Championship Prototype Challenge (PC) class competitor Frankie Montecalvo. Spencer Pumpelly will start the race from the 22nd row in the No. 66 JMW Motorsport Ferrari 458 Italia that he is co-driving with his TUDOR Championship team owner, Seth Neiman, of Flying Lizard Motorsports.

Also in the GTE Am field is the No. 57 Krohn Racing Ferrari 458 Italia shared by IMSA regulars Nic Jonsson and Tracy Krohn. Jonsson will start the same from the 26th row, in the same No. 57 Ferrari that will be competing in two weeks at the Sahlen’s Six Hours of The Glen.

Starting from the rear of the field will be the No. 79 WeatherTech Porsche 911 RSR shared by 2013 ALMS GTC champions Cooper MacNeil and Jeroen Bleekemolen. Their original No. 79 entry from ProSpeed Competition had to be withdrawn due to damage when teammate Bret Curtis crashed in Thursday’s first qualifying session, but the team secured another car for the race.

In the United States, FOX Sports will offer live coverage throughout the 24 Hours of Le Mans beginning at 8:30 a.m. ET Saturday on FOX Sports 1.