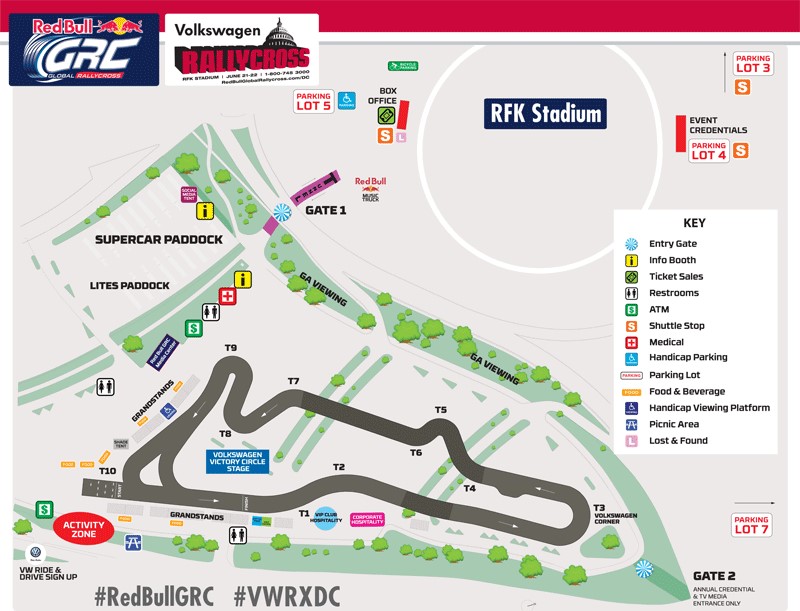 "The exhilarating new track we're building on the RFK Festival Grounds will provide excellent racing for all the fans at Volkswagen Rallycross DC," said Tim Mayer-General Manager, Volkswagen Rallycross DC. "The quick run down to the hairpin Turn 3 will be the site of many side-by-side passing attempts, and the tight, technical portion of the course after the jump will test drivers' patience and the set-ups of these 600-horsepower Supercars."

"The DC track map looks to be one of the best layouts to date from GRC, with fast straights and wide turns for proper passing," said 2014 GRC X Games silver medalist and Maryland native, Bucky Lasek. "I'm really looking forward to showing my speed and race craft in front of the nation's capital and my neighboring Maryland home."

"The racing at Volkswagen Rallycross DC will be unlike anything the district's ever seen," added Tim Mayer. "Fans all around the RFK festival grounds will have the perfect vantage point to see history in the making June 21-22!"

Volkswagen Rallycross DC will reintroduce professional motorsports to the Washington, D.C. area this month in an entirely new way with the Red Bull Global Rallycross Series. June 21-22, the 600-horsepower Supercars of Red Bull Global Rallycross will take over the RFK Festival Grounds for two days of intense action over tarmac, dirt, and 70-foot jumps. Featuring some of the greatest drivers and action sports stars in the world, Red Bull Global Rallycross delivers the world's most exciting racing action, with a commitment to openness and fan interaction. For tickets and more information, visit redbullglobalrallycross.com/dc or call 1-800-745-3000.