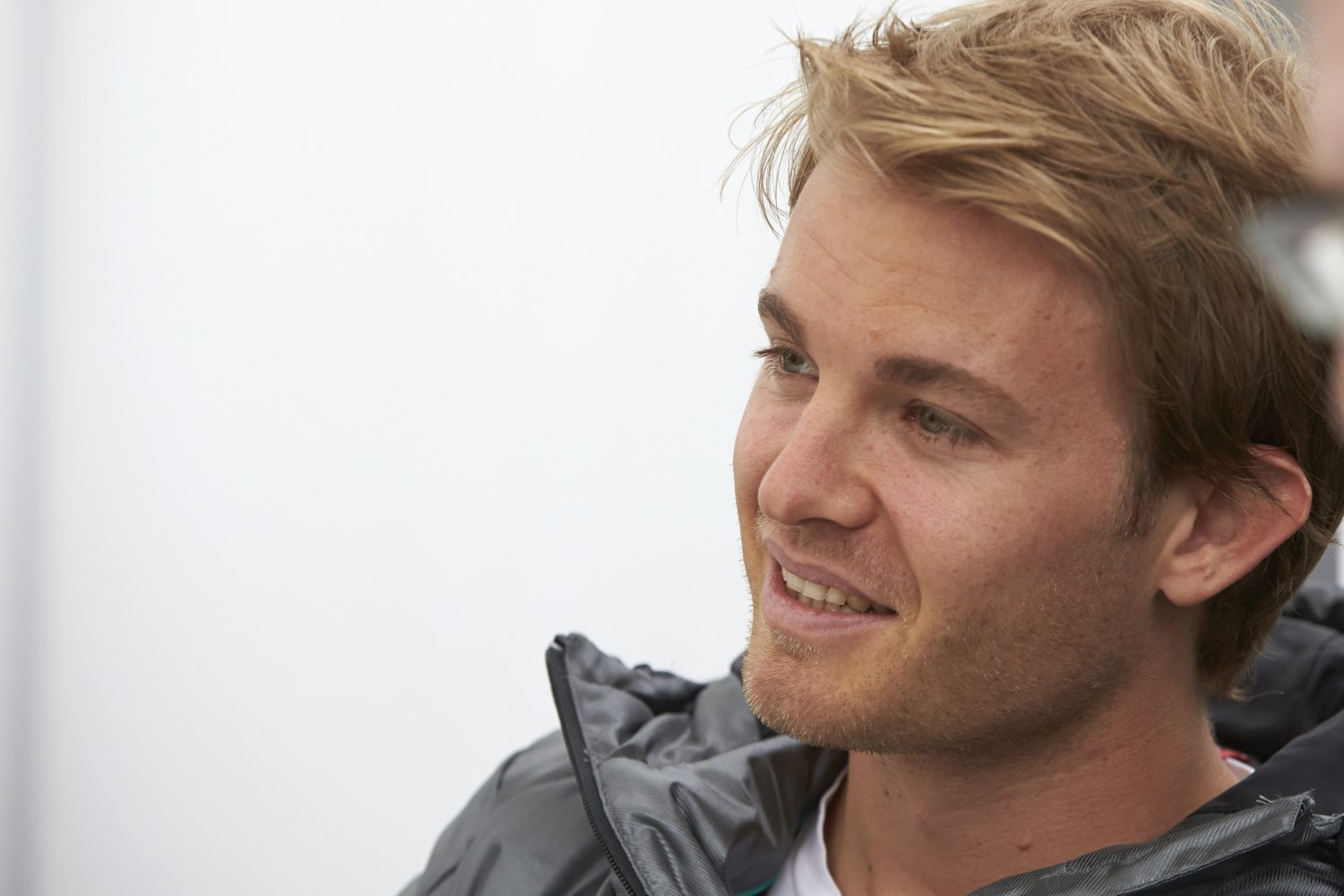 Rosberg a 'big winner' amid Mercedes troubles
(GMM) Nico Rosberg was all smiles after the Canadian grand prix, despite failing to win and grappling with technical problems.

"(Daniel) Ricciardo wins," announced the headline at the German newspaper Die Welt, "but the big winner is Rosberg".

After six straight wins so far in 2014, ultra-dominant Mercedes struck trouble in Canada, with the energy recovery systems on both cars playing up.

On Rosberg's W05, he simply lost the 160 horse power of energy recovery boost, but still managed to finish second behind Red Bull's first win of the year.

The even better news for German Rosberg is that similar problems aboard Lewis Hamilton's sister car meant the Briton had to retire.

It means Rosberg's championship lead, only controversially re-captured in Monaco two weeks ago, now extends to a considerable 22 points.

"That's two DNFs for me and none for Nico, but we are learning as a team and I am sure we won't have any more incidents like we did today," he added.

"It's nice that we could capitalize on Mercedes' issues," said new grand prix winner Ricciardo.

"I think it would have been disappointing if they had their issues and they were able to still get the best of us," he added.

Ricciardo's debut win would also seem to have concreted his place at Red Bull beyond 2014. "I can't see any change happening soon!" he grinned on Sunday.

The team's Dr Helmut Marko agreed: "We are very proud of him. What he is showing now proves that our decision to put him there was absolutely right," he told German television Sky.

The outcome of the Canadian grand prix also isolated Ferrari as the only engine manufacturer involved in formula one yet to break through in the new V6 era.

"What it shows is that it is important to keep working hard, because anything can happen in formula one.

"If we had said after winter testing that Red Bull would win this race, you would not believe it. They have improved a lot."

As for his personal goals for the next few races in 2014, Alonso sounded downbeat: "Finish ahead of my teammate and go home."

F1 to scrap pre-season Bahrain test
(GMM) Formula one will scrap plans to return to Bahrain for pre-season testing next winter.

This year, to guarantee good weather for all-important running of the radically-new cars and engines, the teams headed to Bahrain's Sakhir track for eight days of running ahead of the season opener in Australia.

But with cost-cutting now such a high priority, the sport will not be returning to the island Kingdom ahead of the 2015 season, Speed Week claims.

"Bahrain is much further away from everything than Spain is," he said, "so testing there is more expensive.

"Logistically, Bahrain is a nightmare," Hembery added. "If you have a problem, it takes a lot more time to fly out new parts. Six hours flights, not two."

Speed Week correspondent Mathias Brunner said team bosses agreed in Canada at the weekend that three pre-season tests will take place next winter — all of them in Spain.

The precise dates have not yet been decided, but it is believed the winter testing will begin at Jerez and end with two sessions in Barcelona.

It is also reported that, also for cost reasons, F1 could once again axe in-season testing, despite the fact the concept of post-race tests at some key grand prix circuits was only introduced this year.

Brunner said: "It (the in-season test ban) is not yet set in stone. There are team bosses who want at least two tests during the season."

Red Bull denies giving Mercedes boot from F1 hotel
(GMM) Red Bull has hit back at Mercedes, amid a dispute over hotel accommodation for the forthcoming Austrian grand prix.

On Sunday, team boss Toto Wolff claimed Mercedes staff have been "kicked out" of their hotel bookings just days before travelling to the Styrian region.

"Those who work the most and the hardest on the cars will now have to commute 70 kilometers each day," he said.

It turns out that not only does Red Bull own the Austrian GP venue, the energy drink company's mogul Dietrich Mateschitz is also the new owner of the Schloss Gabelhofen, a castle that now operates as a hotel near the Red Bull-Ring.

"Mercedes itself made the cancellation," he told APA news agency in Montreal on Sunday.

He is also quoted by the German newspaper Bild: "Mercedes told us suddenly and with no reason. I have the correspondence to prove it.

"We have kicked no one out of our hotel," said Marko.

Marko said the fuss about the hotel story was "unintelligible theatre" on Mercedes' part.

In fact, he said Red Bull has bent over backwards to help Mercedes, after it emerged that Lewis Hamilton's plans to have his motor home in Austria fell through.

"Despite great difficulties, we have given him a room at Steirerschloessl," said Marko, referring to the best hotel near the Red Bull-Ring, "so that he can prepare in the best way possible."

"A joke! We have not cancelled our rooms — why would we do that? Because Mateschitz bought the hotel?

"We would have liked to have stayed there," he insisted.

As they tussled for fourth on the last lap, Williams' Felipe Massa hit the back of Mexican Perez's Force India, sending them both into the tires at high speed.

They were both transported to Montreal's Sacre Coeur hospital for checks and later released with no injuries.

According to Germany's Auto Motor und Sport, however, Force India suspects a conspiracy.

That's because, in addition to the four stewards in Montreal including former driver Derek Daly, also in the stewards room on Sunday was Adrian Fernandez.

Former IndyCar driver and Mexican Fernandez was Perez's manager until two years ago, when they acrimoniously split.

"The driver steward was Derek Daly," said Force India team manager Andy Stevenson. "I don't know why Fernandez was asked for his opinion."

FIA race director Charlie Whiting insisted: "From time to time, there are observers to the stewards.

"Fernandez will be the driver representative in Russia, so we invited him here to have a look."

Whiting said any talk of an anti-Perez conspiracy is "nonsense".

On Sunday, off the back of reported huge-money poaching efforts by Ferrari, Mercedes and McLaren, the world champion team announced that Newey has agreed a new "multi-year" deal.

But Red Bull also said 55-year-old Newey will be working on "new Red Bull Technology projects", while merely "advising and mentoring" the F1 team "as it develops its formula one cars over the next few seasons".

And interviews given by Newey in the hours before Sunday's Canadian grand prix made it sound as though the Briton is stepping away from F1.

Indeed, Red Bull's Dr Helmut Marko admits Newey is "disappointed" at the state of today's F1, where unbridled technical inspiration is a thing of the past.

"One must understand that whatever he has done has been banned or restricted by the rulemakers shortly thereafter," he lamented.

"The technical rules have clearly restricted his work, which has frustrated him, but instead of losing him, we have found this solution.

"Newey will remain active with Red Bull Racing for another year," Marko told Germany's Sky, but at the same time he will be fronting what Marko referred to as the new 'Advanced Technology Centre'.

How Newey will split has time has "not yet been fully defined", Marko admits, "but Adrian's genius and incredible wealth of experience will still be available to the team."

Massa and Perez released from hospital
Sergio Perez and Felipe Massa have both been released from hospital after their violent accident at the end of the Canadian Grand Prix. The pair were taken for precautionary medical checks in Montreal having collided at the beginning of the last lap of round seven of the 2014 Formula 1 season.

Perez, who was struggled with a brake issue, had just been overtaken for third by Sebastian Vettel's Red Bull when the right-front wheel of Massa's Williams hit the left rear of the Mexican's Force India. Both cars were sent flying into the barriers, going either side of Vettel and nearly collecting the Red Bull as they did so.

"I saw something white coming in the mirror and I opened the car, turned right, and Felipe was in the air coming past," said Vettel. "I was quite lucky and saw him just in time."

The FIA stewards are investigating Perez and Massa's collision, although both were still in the hospital when they had been due to visit the officials.

Newey 'will design 2015 car' then step back
(GMM) Adrian Newey has clarified he is still heading up the design of next year's Red Bull.

The paddock drew breath on Sunday when the team announced that the Briton, the only undisputed 'genius' engineer in formula one, is stepping back from the front line.

Red Bull has managed to keep the 55-year-old from the clutches of high-paying rivals like Ferrari by giving him an 'Advanced Technologies Centre' to indulge his desire for other design projects outside of F1.

Newey admitted he is frustrated with the ever-restrictive rules in F1, urging a "re-think" that could eventually take him back to the pitwall.

"I'm 55 and not ready for the beach just yet," he told reporters in Canada, "so I'll do this for a little bit and see what happens after that."

For the moment, however, Red Bull's new Newey-centric technology centre is not quite ready, and so the team's current technical director is still on duty.

"Yes, absolutely," said team boss Christian Horner, when asked if Newey is in charge of the 2015 car.

Newey confirmed to Germany's Auto Bild: "I will remain fully involved in the coming months and will design the car for 2015.

"During this time we will also look at how we set up the team for the future."

So it is assumed that after Newey's initial concept of the 2015 car is laid out, his design successors will take over.

"I will take on more of an advisory role," said Newey, "and will always be there for my colleagues if they need advice and help."