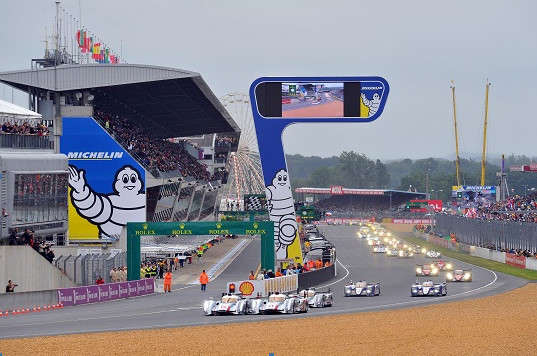 The Le Mans 24 Hours (14-15 June) is the highpoint of the worldwide endurance racing season, and as such is at the summit of the Automobile Club de l’Ouest’s endurance pyramid! It is the race that the all the teams from the five continents dream of winning.

Since 1999 and the creation of the American Le Mans Series (ALMS), the Automobile Club de l’Ouest has patiently built the world endurance pyramid.

Its base is the continental series: the Tudor United Sportscar Championship born of the merger between the ALMS and Grand-Am in North America having its first season this year, the European Le Mans Series launched in 2004 and the Asian Le Mans Series entering its second year in 2014.

This year this system has worked better than ever before. Twenty-eight of the entries for the Le Mans 24 Hours are competing in the FIA World Endurance Championship, of which the ACO is the promoter and organizer, staring with eight out of the nine cars in LM P1, the blue riband category which is accepted only in the FIA WEC and the Le Mans 24 Hours. The race in the Sarthe is the third of the eight rounds on the calendar, and it is one which none of the teams can afford to miss as a double helping of points is awarded.

The European Le Mans Series is also strongly represented. Thanks to their 2013 results Signatech Alpine, SMP Racing, RAM Racing and Proton Competition have earned the right to race at Le Mans this year: the last two have moved up another step as they are entered for the WEC. Sixteen other cars in the 2014 ELMS are also competing in the Sarthe.

The American Championship is also well represented with teams like Corvette Racing, the official arm of General Motors in competition plus OAK Racing, Dempsey Racing and Krohn Racing.

Last but not least the teams from the Asian Le Mans Series, whose entry list is still to be announced, are not left out with OAK Racing Team-Asia (2013 Asian LM P2 winner), Team Taisan and AF Corse as the prolific Italian outfit won the GTC category last year.

There is also a change on the list of entries for the Le Mans 24 Hours as Shinji Nakano will replace James Rossiter in the Taisan Ferrari 458 Italia.

The Le Mans 24 Hours have been reinforced thanks to the entries in the series and in the world championship, and the series as well as the world championship bathe in the aura of the blue riband event to develop in terms of renown, entries and their sporting level. The endurance pyramid is playing its role to the full in the international development of a branch of motor sport whose success keeps on growing!