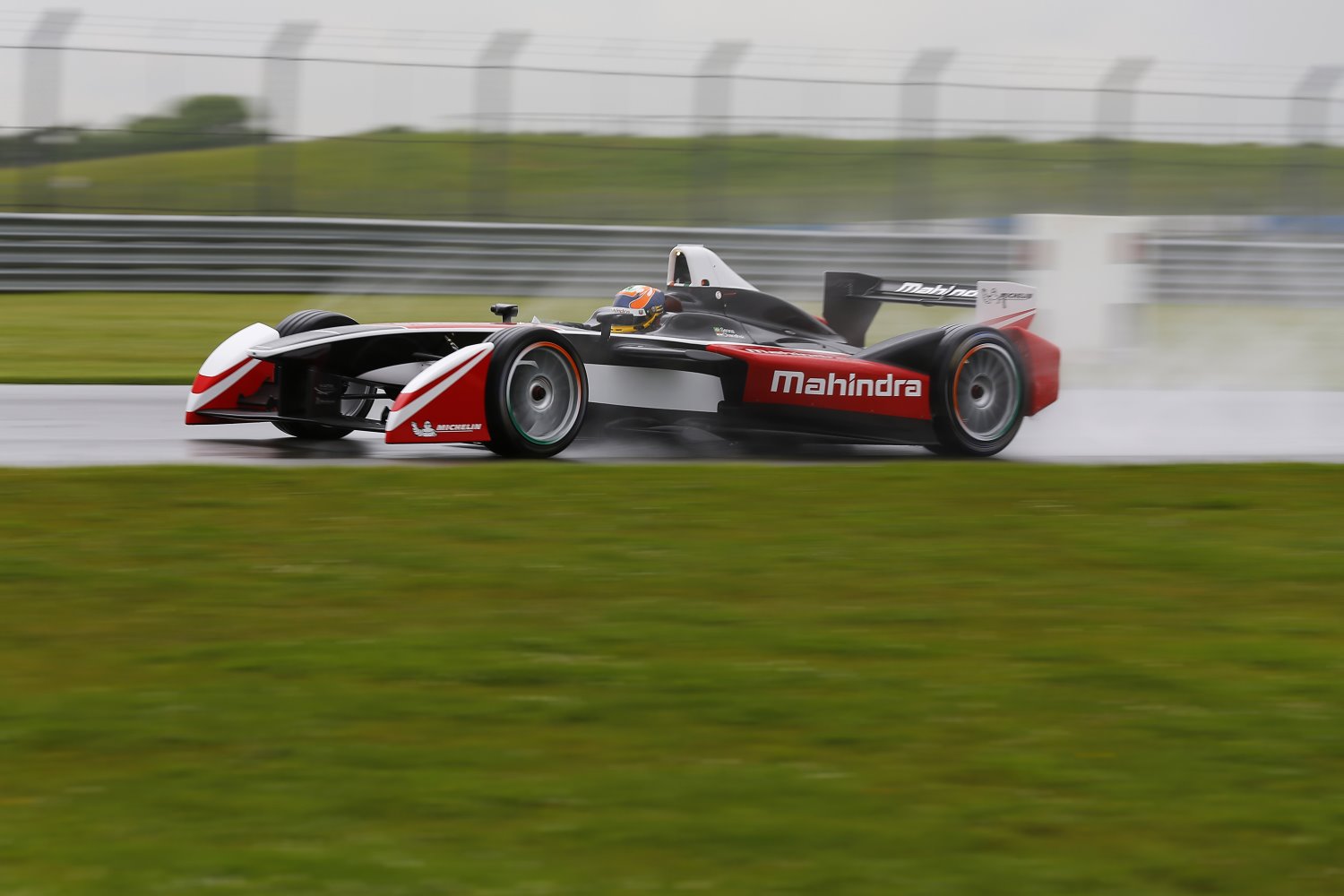 The Mahindra Formula E team completed a successful shakedown of the team’s new Formula E car on Wednesday, at a wet Donington Park circuit in the UK. Taking part in the first ever shakedown for the 10 Formula E teams, Mahindra Racing drivers Bruno Senna and Karun Chandhok completed various system checks during the day’s running.

Both drivers completed their seat fits on Tuesday, with the Mahindra Racing mechanics making the seats and adjusting pedal positions to suit both drivers. With only one car yet delivered to each of the teams, Senna and Chandhok shared the team’s car – named via a fan competition as Mahindra Nitro – throughout the day.

Senna was first to take to the track, pulling out onto a wet Donington circuit in the fully liveried Mahindra Nitro. After a few technical issues, the car was able to complete a number of laps, allowing the team to check the battery and recharging systems. Chandhok drove the afternoon session, completing two separate runs to add to the team’s knowledge of the fully electric machine.

Reflecting on his first experience of the car, Senna said, "It was a fun morning. We managed to check most of the systems which was the objective. It is a completely different thing when you drive this car, because you don’t have as many references helping you when you drive such as engine noise. Sometimes you find yourself hitting the rev limiter as there are no audio signs that you need to change gear. It’s just one of those things we’re really going to have to pay attention to as drivers and it takes only a few laps to understand it. As soon as you get into a groove it’s like any other car. We just need to learn a lot and put together a really good test program for the start of July."

"It was an interesting day" added team mate Chandhok. “Driving a new car is always exciting but driving something so different made it really intriguing. It was very much a systems check and day gathering information on the motor and battery but also a chance for us as drivers to get a first impression. It’s clear this is going to be a category that is about strategy and intelligence rather than just pure driving speed. With the energy recovery systems and battery life you will have to think about strategy all the time. I think the fans are going to be impressed when they see all the cars on track."

Team Principal Dilbagh Gill added, “This was an important day for us. Not only was it the first opportunity for Karun and Bruno to work trackside with the team, it was also our first opportunity to work with and begin to understand the revolutionary technology on the Formula E cars. Despite a few teething problems, we were able to shakedown the car and check very thoroughly all the complex systems on it. Formula E have provided a great technical support team and it was fantastic to see our team and drivers adjust to this new technology so quickly."

Chandhok and Senna will be back on track for the first full Formula E test from 3 – 4 July, also at the Donington Circuit in the UK.