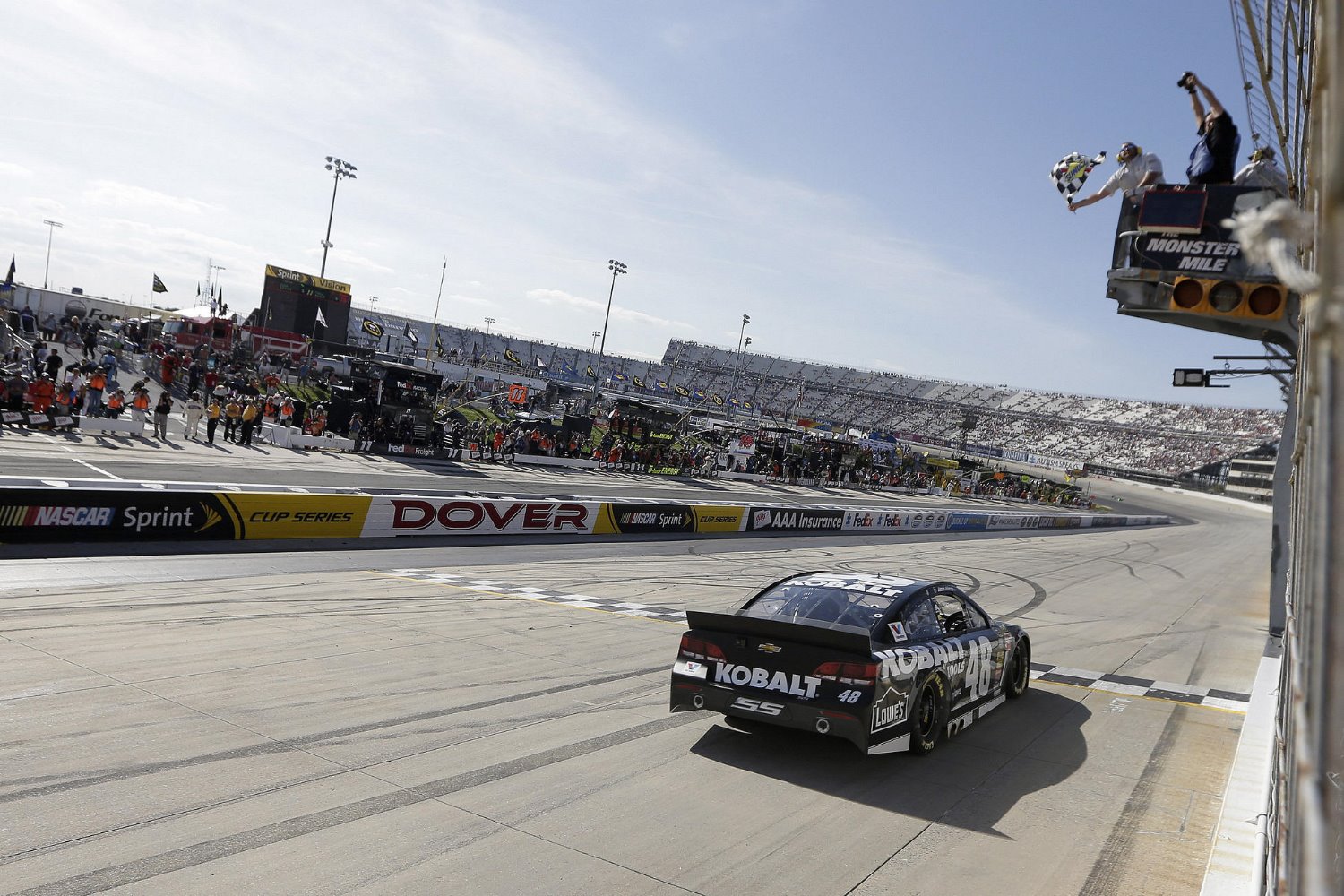 Kyle Larson lingered near his car waiting for the race to begin at Dover International Speedway when British television presenter Cherry Healey joined him on the concrete. Kneeling next to a rear tire, Healey snapped a selfie with NASCAR's newest star.

Selfies are all the rage in every age group, and in NASCAR, where fans can rub elbows with their favorite driver minutes before the start of the race, the ability to snap a shot with the stars is just another perk in the fan-friendly sport.

A snapshot of attendance shows a wider problem that social media can't fix.

Dover had swaths of empty seats on Sunday, continuing the trend of declining attendance at the Delaware race track that primarily serves Baltimore, Philadelphia, Richmond, Virginia, and Washington. Longtime observers said the crowd was the smallest in years, something CEO Denis McGlynn seemed to hint was coming in the pre-race driver meeting.

McGlynn told the drivers that fans simply can't afford to attend races at Dover, and warned "you're going to see some holes in the grandstands."

McGlynn and his staff are targeting a younger audience, trying to build a new generation of race fans, and offered kids 14 and under a $10 ticket on Sunday. In an effort to appeal to those kids, who love Facebook and Instagram and Twitter and Snapchat, McGlynn urged drivers to take a moment and pose for selfies with the new fans. Autographs mean little to anyone but collectors and the guy trying to make a buck, so the selfie goes a long way.

It still costs roughly $65 to get in the gate at Dover, and all those kids targeted with the $10 seats can't get them without the purchase of an adult ticket, too. Throw in parking, food and drink — even if you bring your own — and it's a big spend.

At least half of Dover's targeted audience could have attended the race at Richmond in April. A huge portion of the fans can go to Pocono Raceway in Pennsylvania this Sunday. And the luckiest fans at Pocono can skip the drivers and aim for selfies with the grand marshals, actors Jonah Hill and Channing Tatum.

NASCAR desperately wants to appeal to East Coast fans, but it's a bloated market. There are too many entertainment options already, and NASCAR is cramming in four Sprint Cup races from April 26 through Aug. 3 in one region.

Some will argue attendance doesn't matter because the tracks don't need attendance revenue like they did years ago. All tracks receive a cut of the television package, and the deal that begins next year is worth $8.2 billion, so there's plenty of wealth to trickle down to every facility.

"It's a media-based revenue now, that's a fact," said McGlynn. "But I'm not sure that's a desire for us. We still want those people in the grandstands."

Dover seats 113,000. Maybe it will hit that number this year if it combines attendance from Sunday's race with its September race.

Empty seats are ugly. They look bad for the race track, bad to the sponsors and are bad for the health of NASCAR, regardless of the TV deal.

Could tracks fill the seats by lowering ticket prices? Probably. But hotel prices remain an issue in many markets, and the lodging costs are simply too high for fans even if the tickets are free.

So, aside from giving each driver a daily selfie minimum to meet, what's the solution? AP Article

There's only one answer: and it's not blowing up the schedule. The only answer that will work has been proposed right here on AR1.com, but until the sanctioning bodies take the proposal seriously, racing in the USA will continue its downward spiral into oblivion.

We've said it 100 times, so we may as well say it a 101st time. The youth of this country do not give a dam about racing because they are not exposed to it nor do they participate in it in high school and college like all other stick and ball sports. They do not view it as a sport. They think if it does not involve a stick or a ball, it takes little skill.

There is only one solution – a simple, yet hard – answer. The entire racing industry, along with all the automotive manufacturers (who are also worried about this problem), must get together and put a proposal forth to the NCAA that makes go-kart racing a recognized NCAA sport. A High school should have up to 5 go-kart teams, each with a driver and pit crew. You don't drive a go-kart unless you try out and prove you are the best (watch those big football players fail miserably). There would be local competition, then regional championships, just like high school stick and ball sports.

There would be a motorsports draft each year that would draft the best drivers up into the junior series of IndyCar, NASCAR, IMSA and NHRA.

Then the youth of this country will take an interest in racing again. Until then…….well it's not yet time to stick a fork in racing and declare it's done, but it's headed that way if the industry giants don't take off their rose colored glasses and address reality. Mark C. reporting for AR1.com