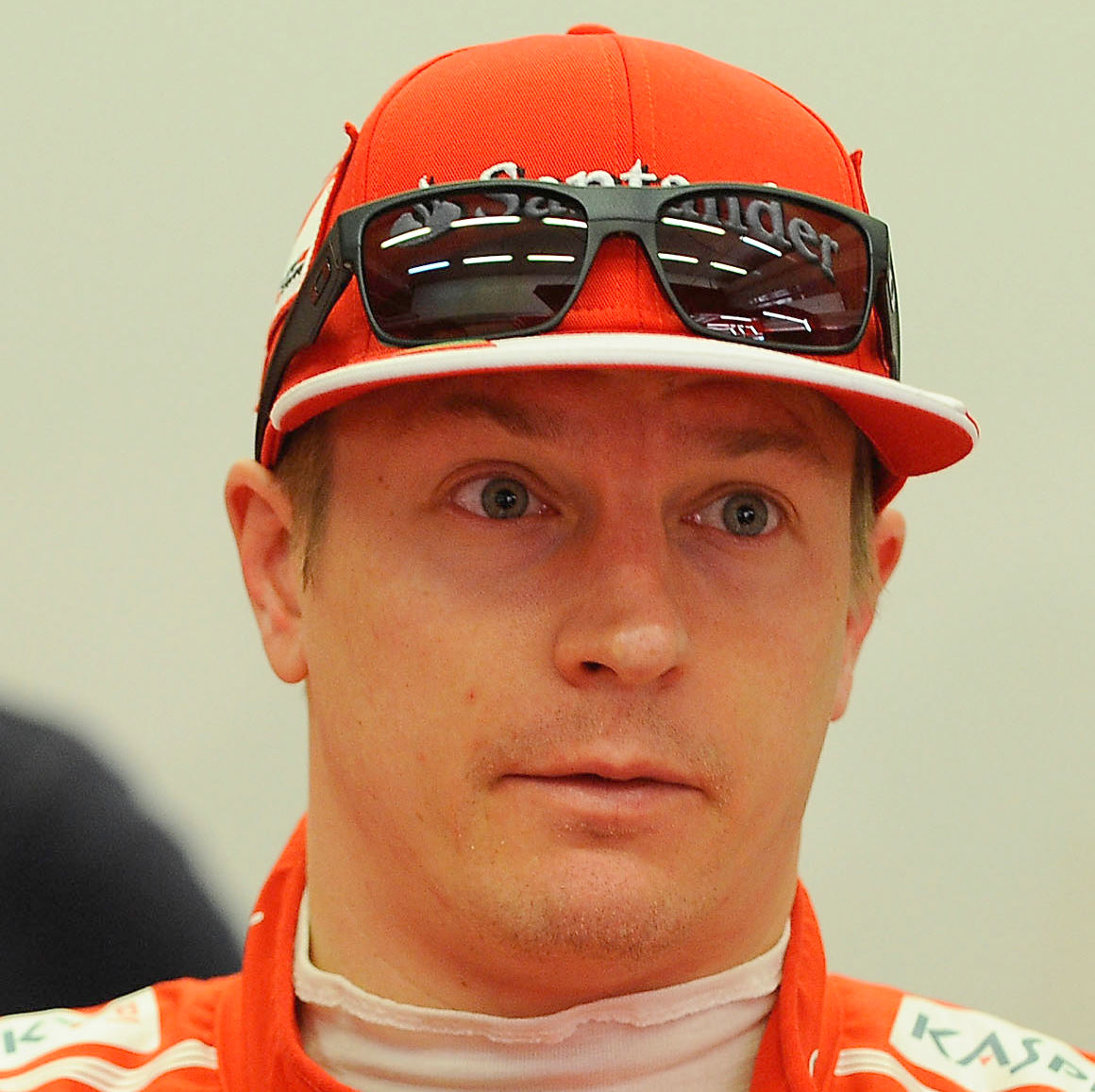 That is the view of the Italian team's technical director James Allison, amid reports the 2007 world champion is suffering a specific problem aboard the 2014-spec F14-T car.

The new rivalry between Raikkonen and Spaniard Alonso was billed as a likely highlight of 2014, but the Finn has been soundly beaten so far.

And ahead of Canada, where Raikkonen – the oldest driver on the grid – will mark his 200th career grand prix, Allison denied that bad luck or a specific technical explanation is at the root of the 34-year-old's current issues.

"I'm not sure it's entirely fair to say he is struggling more than Fernando," the Briton is quoted by the Telegraph.

Allison said every driver in F1 is grappling with similar problems aboard this year's high-torque, low grip cars.

"That means they are quite a handful to drive, not too breezy for anyone, be that at the front or back of the grid," he said.

"The problems Kimi has with the car under braking, downshifting, are the same as Fernando, and pretty much the same as being experienced by other drivers at other teams.

"He's just going a little slower than Fernando at the moment, but that gap is closing as the year progresses," added Allison.

The 49-year-old had worked for Ferrari for almost half of his life when he was replaced as team boss by Marco Mattiacci earlier this season.

Since then, he has been linked with a prominent role in the unfamiliar world of Italian basketball, and last weekend attended the Mugello round of the two-wheeled F1 equivalent, MotoGP.

Asked by the Spanish sports newspaper Marca what he is doing now, Domenicali answered: "I'm trying to disconnect from the world of F1.

"It was an extraordinary experience and I will always support Ferrari. Always. And Fernando (Alonso).

"Then I will take decisions about my future," he revealed. "I have several very interesting options, but I have no hurry.

"I need to think about it and then choose the best option for next year," said Domenicali.

Asked if he sees his future in a competitive field or elsewhere, he answered: "I exclude nothing. Anything is possible. It's still early to say."

Prior to Domenicali's Ferrari exit, it was not known that the Italian was so close to Alonso. The pair were both at the Mugello MotoGP round last weekend.

Alonso is in the process of setting up a professional cycling team for 2015.

When asked about his relationship with the Spaniard, Domenicali said: "Yes, our relationship is extraordinary."

He played down claims that his affable nature, and particularly his friendships within Ferrari, meant he was not suitable for leadership in a tough world like F1.

"People can say what they want," insisted Domenicali. "But I don't think that having good relationships with people means you're good or bad at something."

Gribkowsky asked BayernLB boss for millions – report
(GMM) Bernie Ecclestone was not the only man Gerhard Gribkowsky turned to as he sought to make his millions.

That is the claim that emerged in a Munich court on Wednesday, as embattled F1 chief executive Ecclestone's defense to bribery charges appeared to get another boost.

The latest witness to testify was Werner Schmidt, the former CEO of BayernLB, for whom Gribkowsky managed the public bank's shares in formula one.

Ecclestone, who argues instead that he was blackmailed, is accused of bribing the already-jailed Gribkowsky to the tune of $44 million to influence the sale of the shares to CVC.

But Kleine Zeitung newspaper reported that, in court on Wednesday, Schmidt told of how Gribkowsky had once asked for a huge multi-million bonus as part of his work on managing the F1 shares sale.

Schmidt said he responded to the request angrily, saying it was "absolutely impossible" to consider giving Gribkowsky a 10 million euro bonus, as others at the bank also "worked day and night at the time".

Kleine Zeitung said Gribkowsky ultimately got nothing extra from Schmidt except his usual half-million euro salary.

Another former BayernLB official also seemed to give the Ecclestone defense another boost when he testified on Wednesday that there were few viable alternatives to selling the F1 shares to CVC.

"It took a long time before we found an interested buyer on the market," said former board member Dieter Burgmer, while ex-CEO Schmidt agreed that the bank was more than pleased with the final price agreed by CVC.

Marshals better trained after 2013 Montreal death
(GMM) Marshals have been trained more thoroughly than before ahead of this weekend's Canadian grand prix.

A year ago in Montreal, F1 was mourning its first fatality in over a decade, after track marshal Mark Robinson was crushed by a recovery vehicle as he helped to move Esteban Gutierrez's retired Sauber.

A subsequent investigation showed that the driver of the crane was not properly trained to operate it.

So the Montreal Gazette reports this week that marshals using the cranes have now all been trained, according to the workplace safety board CSST.

The newspaper said the Montreal race promoter Octane, and the automobile club de l'Ile Notre Dame, were fined by the board as a result of the death.

"Look at the upgrades of the first six races," the Briton is quoted as saying. "Much less than last year, and most of it was just cosmetic.

"We are looking at details like the 'monkey seat' because the regulations give us less and less room to move," added Newey.

Nonetheless, Ferrari is debuting a substantially upgraded 2014 car this weekend in Canada.

Italy's Autosprint magazine said so much has changed that the car could aptly be named the F14-T's 'B' version.

"We can't make predictions," said Fernando Alonso, "because our improvement has to be seen in relation to what our competitors come up with.

"We need to match them and then find a plus," he added ahead of the Canadian grand prix.

German clinic denies Schumacher rehab reports
(GMM) A German rehabilitation clinic has denied that one of its current patients is the great Michael Schumacher.

The former Ferrari and Mercedes driver's manager Sabine Kehm said in April that, after Schumacher began showing signs of waking from his long coma, the "plan" was to relocate him from the hospital in Grenoble, France.

"Our plan and our desire would be that from the moment in which Michael can go into a rehab clinic, this media coverage will stop," Kehm told ARD television.

Germany's Radio 7 claimed on Wednesday that Schumacher, who turned 45 after his near-fatal skiing fall, is now recovering at the Kliniken-Schmieder neurological rehab hospital in Allensbach, Germany.

But the German news agency DPA said a spokesman for the clinic specifically denied the Radio 7 report.

DPA added that Schumacher is still at the hospital in Grenoble, where he has been since he struck his head on rocks at the Meribel ski resort in late December last year.

Alonso: No retirement until third title
Ferrari driver Fernando Alonso has said he is not thinking of retiring from Formula 1 until he has bagged his third title.

Alonso claimed back-to-back crowns with Renault in 2005 and 2006, but since then has failed to repeat that, although he did finish second to Sebastian Vettel in 2010, 2012 and 2013, only narrowly missing out on two of those occasions.

Speaking ahead of this weekend's Canadian Grand Prix, where the dominant Mercedes' of Lewis Hamilton and Nico Rosberg are expected to again rule as they have all season, the Spaniard reiterated how important that third crown is to him.

"It is something I am working for and hoping for," he said in an interview with BBC Sport. "Three titles means a step. It is not that I'm not happy with two but the third puts you in a list of very important names. I have been close twice [with Ferrari] and hopefully the next opportunity we have we don't miss it again."

"We are still hungry for success, waiting for our opportunity to become champion," he added. "This is the main goal and you don't think of retiring until you get some satisfaction."

Asked if he still believes Ferrari can provide him with a car to take that third crown, he replied: "I must, and I need to, believe. There is the potential there. We have all the ingredients and we just need to put them all together. I am very proud to be part of this team and I know that winning with Ferrari will mean more than winning with another team and it is something we want to do."

So how much longer can he carry on? "I think I can carry on long enough to win and to be competitive for some good years," continued the 32-year-old. "I don't know how many [years] – three, five, seven. I don't think it should be any problem."