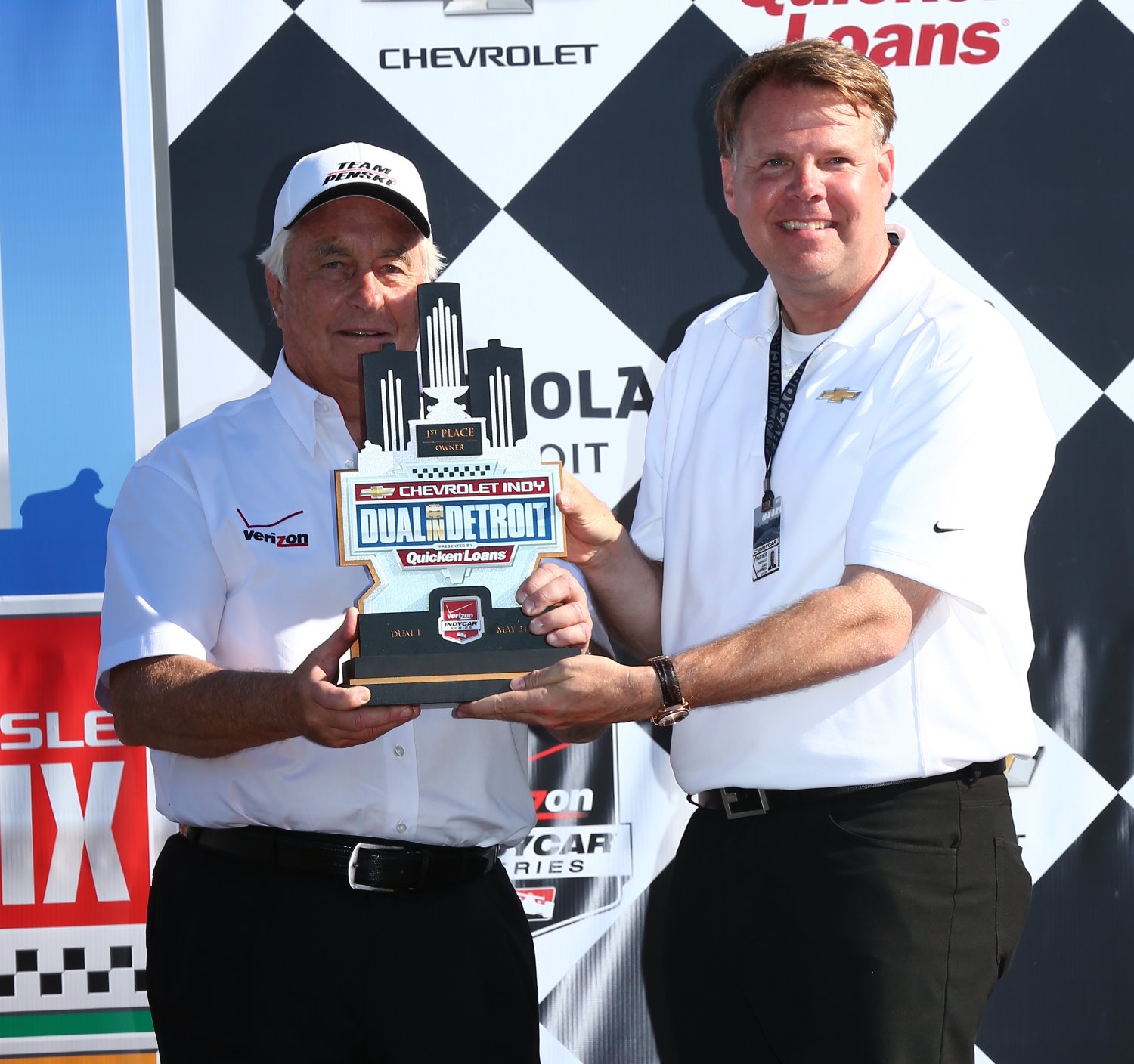 [Editor's note: With Roger Penske investing in Belle Isle, and the city of Detroit rallying behind The Captain, we here at AR1 are not the least bit surprised this event is growing. Look for further discussion of the Chevrolet Indy Dual in Detroit Presented by Quicken Loans in AR1 columnist Brian Carroccio's Detroit Postscript later today.]

DETROIT, Mich. (June 4, 2014) – With the final numbers in, the 25th Grand Prix event in Detroit may go down as the most successful in the history of the race.

With a weekend full of wonderful summer weather, thrilling racing on the track and fans reveling in all of the exciting off-track activities, the 2014 Chevrolet Detroit Belle Isle Grand Prix was a huge success by all measures. Michigan newest state park welcomed thousands of fans as both returning race attendees and new visitors got to experience Belle Isle Park and all its splendor.

Weekend attendance numbers were estimated at 110,000 fans over the course of the three-day event. The estimates included approximately 25,000 fans on Friday for Comerica Bank Free Prix Day, just under 40,000 in attendance on Saturday and a little over 45,000 people on Sunday. The total represents the highest attendance since the Grand Prix returned to Detroit in 2007.

National television rating numbers also revealed a strong weekend. The ABC-TV broadcasts of the Chevrolet Indy Dual in Detroit presented by Quicken Loans Verizon IndyCar Series races each drew solid overnight ratings. The Saturday, May 31 race drew a .82 national rating while the Sunday, June 1 race posted a .66 rating. Saturday’s number was an increase of 24% over the 2013 Saturday race on Belle Isle while Sunday’s rating was down slightly over the second Dual in Detroit from one year ago. Both races represented the highest rated Verizon IndyCar Series races this season outside of the Grand Prix of Indianapolis and the Indianapolis 500.

On the social media front, the Grand Prix experienced remarkable growth and activity for the second consecutive year. With over 28,000 social mentions and well over 100,000 Facebook users alone engaged over race weekend, the Grand Prix saw an increase of 30% or more across all key social metrics, fueled by “The Inside Track" fan engagement campaign.

“It was a remarkable weekend for everyone at the Chevrolet Detroit Belle Isle Grand Prix," said Bud Denker, Chairman of the Grand Prix. “The numbers are impressive but the true value was in the smiles on people’s faces as they experienced the event and all that Belle Isle has to offer. Our beautiful waterfront shined like never before. But the true champion here is Belle Isle as the investments and improvements made to the island this year by the Grand Prix will be in place for citizens to use on a daily basis for years to come. Of course, the icing on the top was to have General Motors win five races held during the weekend. We want to thank all the fans that came to the event and allowed us to set new attendance records and our sponsors, who made the event possible. Without Chevrolet, Cadillac, Quicken Loans and many others, this event would not occur. Our job now is to make the 2015 Chevrolet Detroit Belle Isle Grand Pix, which will again include two Verizon IndyCar Series races, even better."

On the track, it was a weekend to remember for General Motors, racing in the shadows of its world headquarters. Chevrolet and Team Penske swept both ends of the Verizon IndyCar Series doubleheader with Will Power winning the first Chevrolet Indy Dual in Detroit presented by Quicken Loans on Saturday and Helio Castroneves earned his third career Detroit victory in Dual II on Sunday.

In the TUDOR United SportsCar Championship on Saturday, Jordan and Ricky Taylor took the victory in the Chevrolet Sports Car Classic presented by the Metro Detroit Chevy Dealers for Wayne Taylor Racing driving the Konica Minolta Corvette DP. Richard Westbrook and Michael Valiante finished second in the Spirit of Daytona, VisitFlorida.com Corvette DP. The race was decided on the final lap and it provided one of the most exciting finishes of Grand Prix weekend.

Cadillac Racing’s Johnny O’Connell continued his dominance on the Raceway at Belle Isle Park as he claimed victory in both Pirelli World Challenge Series races in the Cadillac V-Series Challenge presented by the Metro Detroit Cadillac Dealers. O’Connell has now won five of the past six series races on Belle Isle. His Cadillac Racing teammate Andy Pilgrim finished in second in the second race to give Cadillac a 1-2 finish to end the weekend.

EJ Viso dominated the debut of the popular SPEED Energy Stadium SUPER Truck Series on Belle Isle as he won all three races featuring the wild high-flying trucks throughout the weekend.

In the Meijer Fan Zone, Grand Prix-goers enjoyed all of the great activities including free monster truck rides, demonstrations from the Monster Energy BMX team and the Detroit Sports District, featuring displays from all four Detroit pro sports teams with free autograph signings from former star athletes including Larry Murphy, Mateen Cleaves, Joe Kocur, Lomas Brown and more. Fans also flocked to the new Leinenkugel’s Biergarten and Food Court and took advantage of all the great memorabilia and merchandise in the Quicken Loans Vendor Village.

With a multi-year extension previously announced by title sponsor Chevrolet, the Grand Prix is ready to build on this year’s record-breaking event for the future. After the event, officials confirmed that the majority of the 2.3-mile race circuit will be repaved later this summer, ensuring that Belle Isle will become one of the top street circuits in motorsports and that visitors to the island park will benefit from the improvements year round.

For more information on the Grand Prix throughout the year, visit www.detroitgp.com.