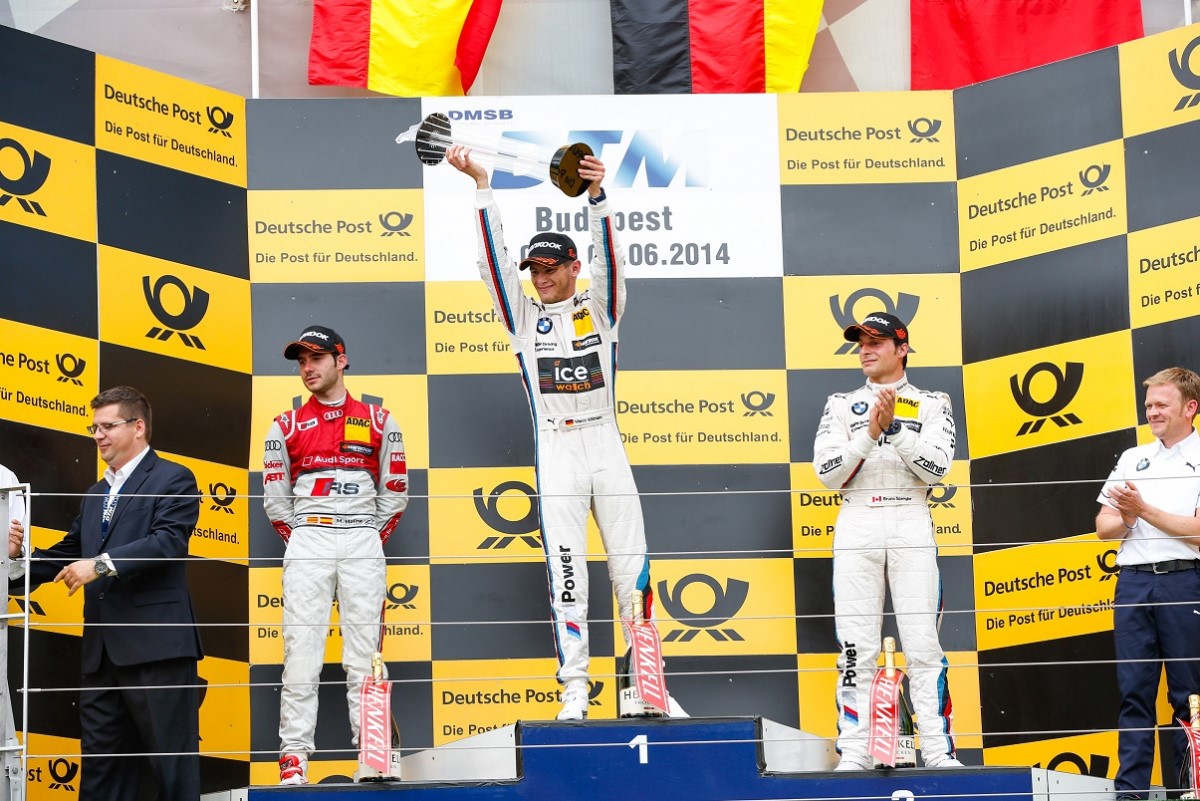 In a commanding way, Marco Wittmann decided the third DTM season round at the Hungaroring in his favor. Driving his BMW M4 DTM, Wittmann, who had started from pole position, crossed the finish line as the winner after 41 laps with a margin of 6.615 seconds. Following his success in the Hockenheim season opener, this was the second DTM race win for the Franconian, who will now come to his home race at the Norisring (27 till 29 June) as the championship leader.

"This is a great success, because in the closing stages, you never know whether the drivers with option tires can still close up. However, our strategy worked out. I built up a huge advantage and then held on to it without making any mistakes. I am not wasting any thoughts on the title, we are just working from one race to another," Wittmann commented. Miguel Molina (Audi) and Bruno Spengler (BMW) finished second and third respectively. In total, 33,000 spectators came to watch the first DTM race weekend in Hungary after 26 years.

Molina, who was third in qualifying, initially had lost a few positions after the start. During the race, the Spaniard worked his way up into second place again with his Audi RS 5 DTM. “We were quick and after my bad luck in the first two races, I am really happy with this second place. We have deserved this podium finish and there are still quite a few races to go, so I finally want to win one of them," Molina said after his first podium finish since the 2011 season finale. Spengler raced with a different strategy. In the second half, he used the faster option tire and thus overtook one opponent after another on his way to third place. “Something like that doesn’t happen very often," the Canadian said. For him, only Wittmann and Molina were beyond reach.

Spengler’s fellow Canadian, Robert Wickens (Mercedes-Benz) had his eyes set on his first championship points of the season at Hungaroring. Having started 17th, he moved up as high as seventh with his DTM Mercedes AMG C-Coupé, but then dropped back again to eleventh on the final laps. “I had a good start and ran all on my own for a long time. Having to race on your own is always difficult. At the end of the day, it is a pity that we missed out on scoring points, but we have made a step forward," the best-placed Mercedes-Benz driver said.

The Hungarian spectators were entertained by many exciting duels in the battle for the top ten positions. There was plenty of action, particularly in the closing stages. For a long time, BMW driver Timo Glock was running in fifth place after intense battles with Edoardo Mortara (Audi), who eventually came fourth, but retired on the final lap following a collision with Nico MÃ¼ller (Audi). Adrien Tambay (Audi), Maxime Martin (BMW), Jamie Green (Audi) and AntÂ¢nio Félix da Costa (BMW) were classified fifth to eighth. The two Audi drivers Mattias EkstrÃ¶m and Mike Rockenfeller claimed the final point-scoring positions.

With 50 points after the first three rounds, Marco Wittmann is already 19 points ahead of defending champion Mike Rockenfeller (31). Mortara is third in the drivers’ standings (27).