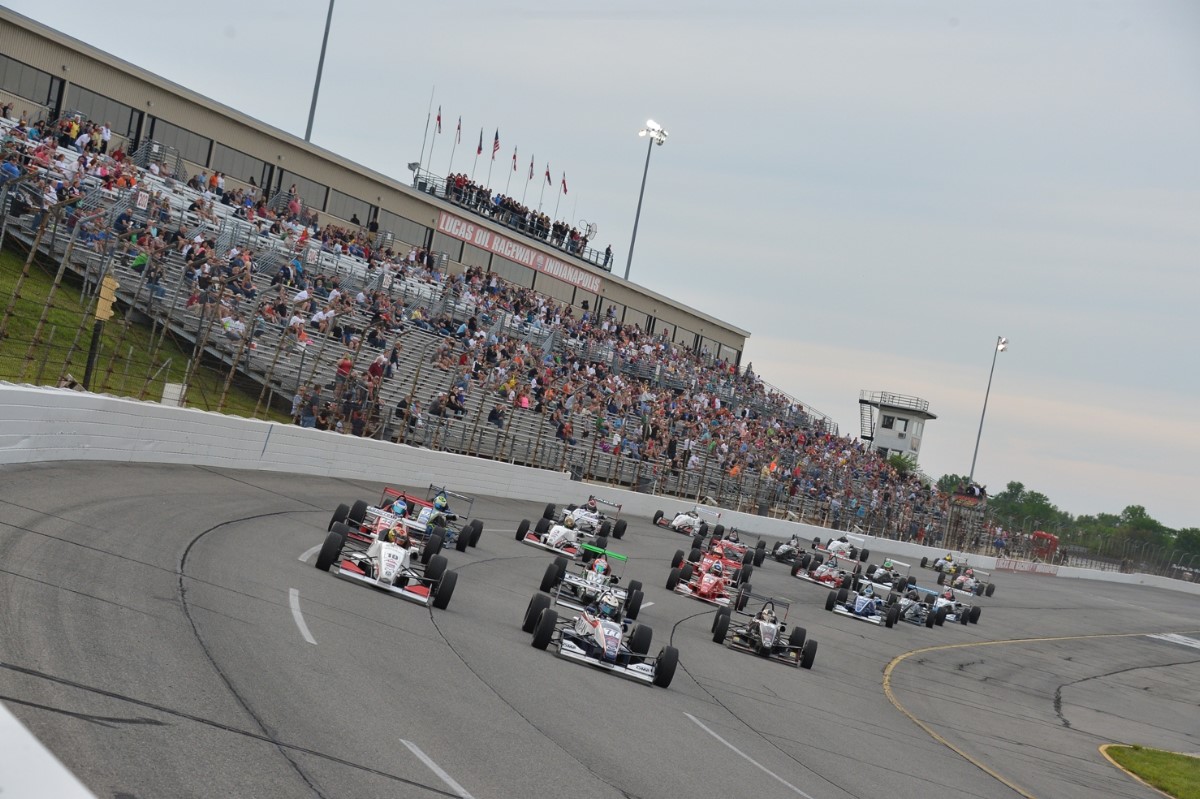 Brownsburg, Ind. – Rookie Aaron Telitz scored an impressive first-ever career victory in this evening's Allied Building Products Oval Challenge, Round 7 of the Cooper Tires USF2000 Championship Powered by Mazda at Lucas Oil Raceway in the 69th Annual Visit Hendricks County Night Before the 500. It was also the first win for Wisconsin-based ArmsUp Motorsports.

Telitz, from Birchwood, Wis., winner of last year's Skip Barber Championship Shootout, was the man to beat, posting fastest times in practice with the #5 MAZDASPEED/Rice Lake Special Van Diemen-Mazda, but he struggled a little in qualifying and could manage only sixth in the closely matched field.

Polesitter Florian Latorre took off into the lead at the start for Cape Motorsports with Wayne Taylor Racing, chased by Cindric, Jeroen Slaghekke (Belardi Auto Racing), Franzoni and Clark Toppe (JDC MotorSports), who put up quite a fight in the early stages before finally ceding fifth place to Telitz on Lap 11.

Telitz then quickly tracked down Franzoni, whom he passed for fourth on Lap 19. Clearly the fastest man on track at this stage, Telitz made short work of Dutchman Slaghekke, then within the space of a little more than a lap swept past both Cindric and then Latorre to take over the lead in tremendous style on the inside line going into Turn One. He never looked back, inched clear of the field and finally took the checkered flag 1.3237 seconds to the good after a hectic, all-green, 75-lap race.

On Lap 36, Cindric also found a way past Latorre in Turns One and Two to take over second place, followed almost immediately by Franzoni.

Latorre also lost places to Slaghekke and Toppe, who finished fourth and fifth, and just managed to hold off a charging Peter Portante (ArmsUp Motorsports) to hang onto sixth. Portante had run in the lower reaches of the top 10 for much of the race but really turned up the heat in the late stages, charging past Jake Eidson (Cape Motorsports), Belardi teammates Nico Jamin and Daniel Burkett, then German teenager Keyvan Andres-Soori (Cape Motorsports) to finish seventh.

Eidson, who started 17th after almost losing control of his car in Turn Two during his qualifying run, finished ninth to earn the Tilton Hard Charger Award.

Additional awards were claimed by Portante, who snared the RePlay XD Move of the Race Award after being squeezed between Eidson and the wall on Lap 68, bumping both, and still completing the pass on Eidson in traffic. The PFC Award and customized Race Energy charger – the official battery of the ladder series – went to the winning team of ArmsUp Motorsports, and the Staubli Award to Cindric.

The next two rounds of the Cooper Tires USF2000 Championship Powered by Mazda will take place in support of the Verizon IndyCar Series on the streets of Toronto, Canada, on July 19/20.

Aaron Telitz, #5 MAZDASPEED/Rice Lake Special (ArmsUp Motorsports): "The race was awesome. I was starting sixth and I knew that I was going to have to have a car that could work on the bottom to make any passes, and about Lap 15 it just came in. I could ride down on the bottom just as fast as the guys at the top and when you have a shorter distance, you're going to make passes. I went right to the front and sailed off and that was it. It feels awesome to win in front of a crowd that came to watch us without the [Verizon] IndyCar Series as the headline. It is seriously awesome and I have to thank all the fans that were here."