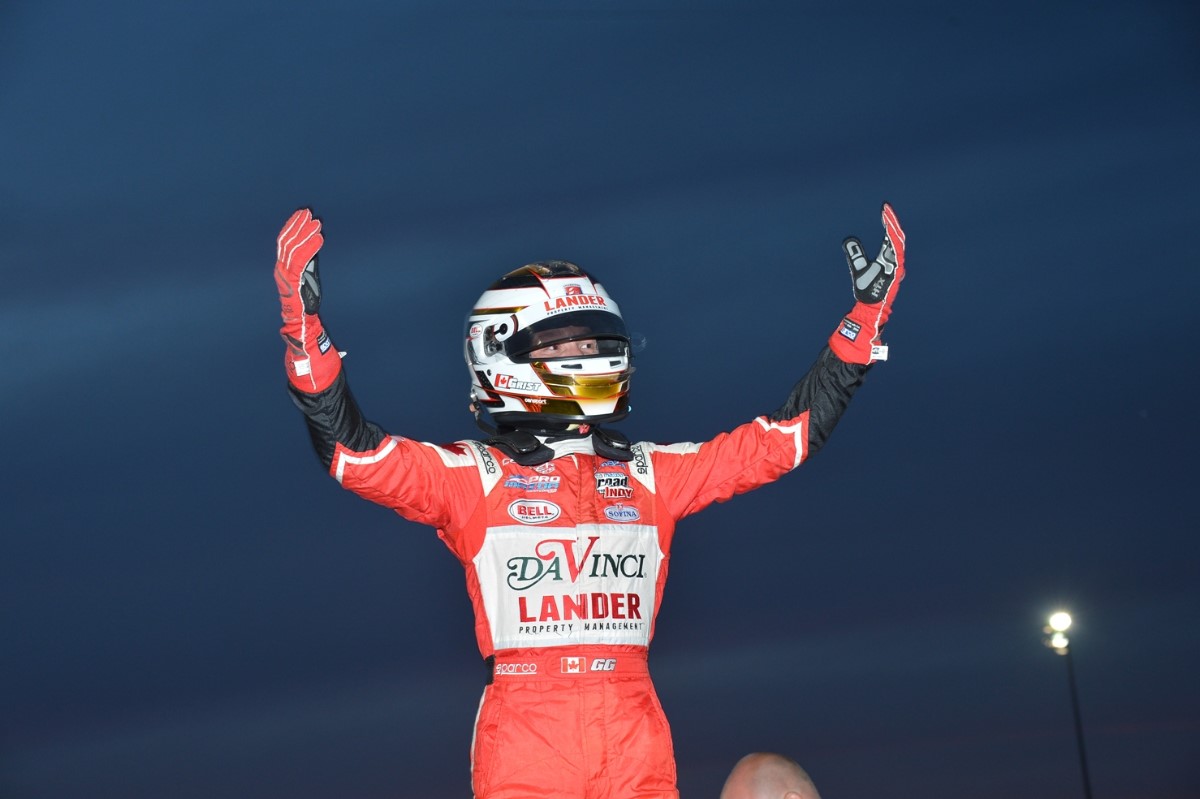 For the second time in two weeks in the Indianapolis area, a young Canadian scored his first victory in the Pro Mazda Championship Presented by Cooper Tires. This time it was Garett Grist, driving for Andretti Autosport, who led from flag to flag in Saturday evening's Allied Building Products Oval Challenge at the 0.686-mile Lucas Oil Raceway oval as part of the 69th Annual Visit Hendricks County Night Before the 500.

Both Grist, 19, from Grimsby, Ont., and Andretti Autosport teammate Shelby Blackstock had struggled during testing and official practice, but suddenly found the required turn of speed in qualifying as Grist took the pole with a two-lap average of 110.615 mph. Blackstock wasn't too far behind in third, sandwiching practice pace-setter Pigot.

Grist took full advantage of his hard-won pole position by holding off Pigot and Blackstock at the start, with Nicolas Costa, making his first start for Pelfrey Racing, jumping into fourth ahead of Hargrove and Cape Motorsports with Wayne Taylor Racing teammate Neil Alberico.

The race quickly settled into a pattern, with Grist and Pigot setting a torrid pace at the head of the pack and Blackstock gradually slipping behind in third place. On Lap 45, Grist's #27 DaVinci Foods/Lander Property Management car suddenly stepped out from underneath him in Turn Three. The youngster managed to regain control, but suddenly Pigot was alongside as the leaders sped past the grandstands and into Turn One. Grist, however, fought off the attack and soon began to edge clear to cement his victory in style.

Now it was Pigot's turn to struggle. All of a sudden, the steering began to tighten up and the already stern physical challenge became even tougher. By Lap 75, Pigot had slipped back into the clutches of Costa and Hargrove, both of whom had found a way past Blackstock, who also was struggling with a handling imbalance.

Hargrove, who said his car mysteriously found some extra speed in the closing stages, swept past both Costa and Pigot on Laps 83 and 84 to take over second place and earn himself the RePlay XD Move of the Race Award. Hargrove also took home the Quarter Master Hard Charger Award after rising from sixth on the grid to second.

Pigot was virtually exhausted at the finish line after narrowly holding off the attentions of Costa. Afterward it was discovered that the right-front tire on Pigot's car was almost completely flat after having picked up a piece of debris.

Veteran Anders Krohn, making his first start of the season, finished a strong fifth in the second Team Pelfrey car, followed by Alberico, the disappointed Blackstock, and Kyle Kaiser, who edged out Juncos Racing teammate Jose Gutierrez after a race-long battle.

Additional contingency awards included the PFC Award and customized Race Energy charger – the official battery of the ladder series – to the winning team, Andretti Autosport; and the Staubli Award to race winner Grist.

Pigot and Hargrove are now separated by only three points, 180-177, as the Pro Mazda Championship moves on to the streets of Houston, Texas, for Rounds Eight and Nine in conjunction with the Verizon IndyCar Series on June 28/29.

Garett Grist, #27 DaVinci Foods/Lander Property Management (Andretti Autosport): "Today's race went really well. I was able to settle down into a rhythm after Spencer had put some pressure on me. Once I settled down into my rhythm we slowly pulled away and I think we managed traffic a lot better than the rest. I could definitely use all the lanes and not lose any time going down low which is a lot like I had last year in the USF2000 race. I am really happy the car was that good and we were able to do that."

"I'm really happy with tonight and it's very special. The last few laps were great; Yancy (Diotalevi, race engineer) was counting down. I slowed my pace a little more towards the end to be a bit more careful and not run into the traffic ahead of me. Huge thank you to the Lander Property Management/Bell Helmets crew for an awesome win."