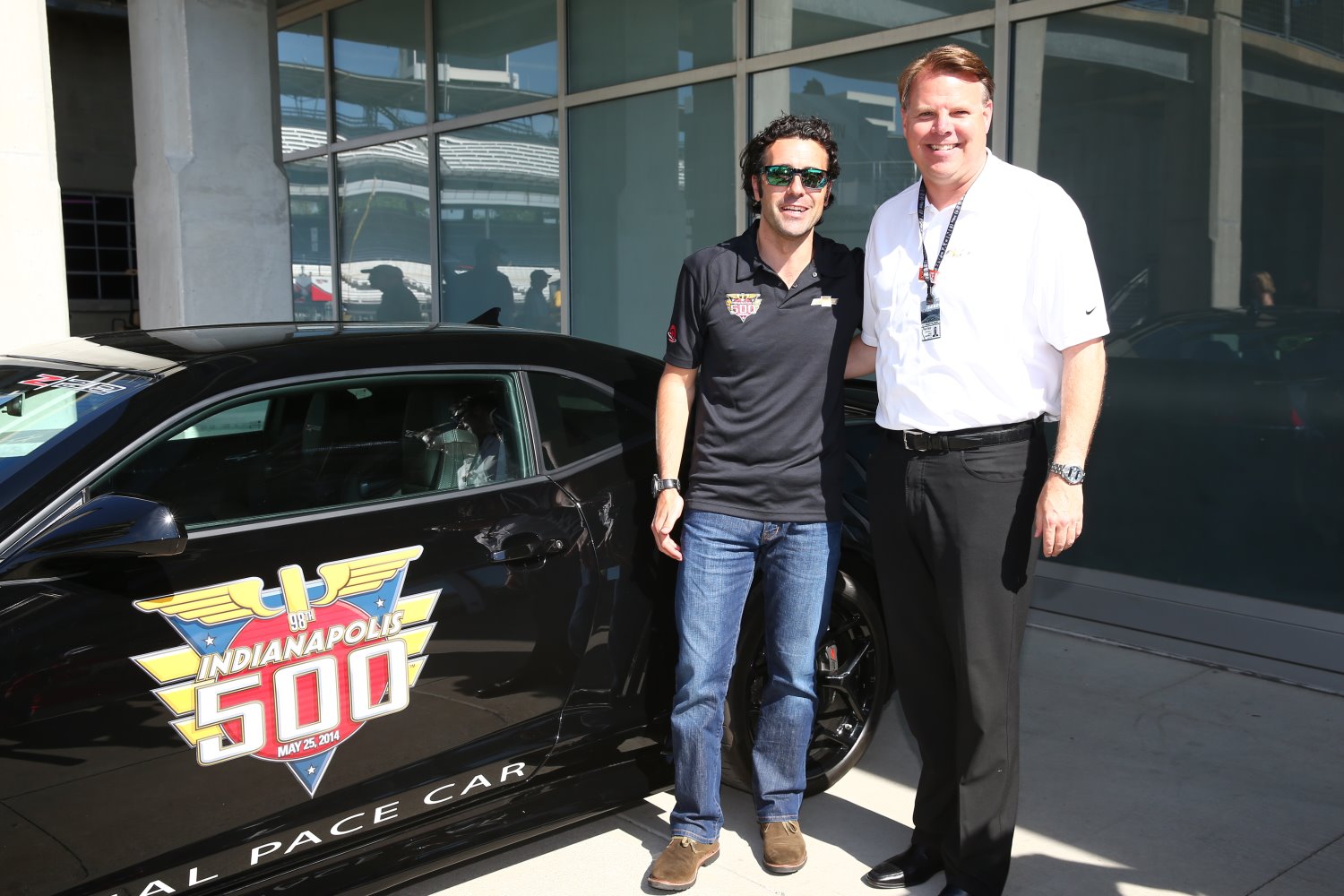 MODERATOR: The Camaro Z28 is quick. Just a couple of factoids: It will be the 25th time that a Chevrolet has paced the field beginning with Wilbur Shaw in 1948. Many of you that may not be steeped in the lore of this Speedway, Wilbur Shaw was instrumental in saving the Speedway by convincing Mr. Hulman to purchase the track. He was a three-time winner of the race, like Dario Franchitti, and he was the president of the Indianapolis Motor Speedway.

This is the eighth time a Camaro, in this case the Camaro Z28, has paced the field here at Indianapolis. So we have a couple of icons with us. We have obviously Chevrolet, a brand that's known for performance, and so deeply a part of the Indianapolis Motor Speedway, and this gentleman who is a three-time winner of the event.

Now, Dario, the thing that I heard, which I think is a great story, that you got to take your parents around the track and that they had never been around the facility. Is that true?

DARIO FRANCHITTI: No, they hadn't. The folks at Chevy were nice enough to let me take them for a couple of laps. I was doing some ride-alongs this morning, and at the end Mom sat in the back because she's a little shorter than Dad — I'll get in trouble for saying that. Anyway, and headed off. We did three laps. So she was having a great time. I think my dad was a little — I think it was close to his threshold of what he wanted to experience on the second lap. He was quite happy. So that was great. It was really so much fun, too, anytime you get to drive around here.

I've done a bunch of laps now in the Z28 Camaro. It is a quick car. I did stuff back in, I think it was March, and then I did some laps this month. I've gone considerably quicker than pace car speed, so that was fun.

MODERATOR: Come on, give it up.

FRANCHITTI: Am I allowed to give it up? The highest speed I saw was 170 into Turn 3.

FRANCHITTI: Yeah, that was top speed, not the average speed. Trust me, in the corner, about 120. 130 is getting interesting. 120 the thing just sits down. It's a great car. It handles so well. I always thought muscle cars didn't handle; this thing handles. And it stops as well. Because I was going over the yard of bricks flat this morning and then pulling in and stopping and giving the brakes a workout, so it's a great car. It's been a lot of fun, but the serious stuff starts tomorrow. I don't want to mess that up.

MODERATOR: You know, there's a long history of a variety of individuals who have driven the Pace Car. Last night I chatted with Patrick Nalon whose father Duke Nalon is a legend here, and Duke for many years drove the Pace Car as well. What's it like for you? I mean, what's the feeling? Are you nervous about it?

FRANCHITTI: Yes. I just don't want to mess it up because there's 33 of my contemporaries back there who it's the most important day of the year certainly and a lot of their life. So I don't want to do something stupid that's going to, you know, mess it up for anybody. I joked with Will about brake checking him on one of the laps. (Laughter)

I want to, you know, I want to do a good job there. It's going to be interesting to be on the grid. That's the bit that's really, I think, going to interest me the most, being on the grid and soaking up the atmosphere for the first time. Because my job was always to block out whatever was going on and to focus on the race. This year I'm going to be able to soak it all in and I'm really looking forward to that actually.

MODERATOR: You read that comment about going to Sebring here a while back, that you had never really sort of gone like as a fan. So is it the soaking it up? Is it painful? I mean, everyone wants at the know what your emotions are.

FRANCHITTI: Well, I don't know what tomorrow is going to feel like. I think it's going to be difficult. The rest of the month has been great because I'm fairly at peace with the fact I'm not in the car. I also realize that I'm not sure I would have the commitment level anymore to do what's required here, or any track. You know it's a certain mind-set you've got to have, you know, the crazy things that you saw the guys do on the Fast 9 last Sunday is normal for drivers. And it doesn't feel normal for me anymore, therefore I shouldn't be a driver anymore.

So I'm enjoying it a lot. I'm loving still working with the Target team. I'm loving being still around INDYCAR races and I'm loving driving the Pace Car, too. So it's a fun time. It's great to have my mom here. This is the first 500 my mom has ever been to, and obviously my dad has been to a lot. But it's fun to have them here and enjoy a lot of the things. They're going to ride with me in the parade this afternoon. It's little things like that that's fun.

I was talking to JR Hildebrand and I had a long conversation with Will Power yesterday just about what you mentally go through this month. I've seen with it Scott (Dixon), see it with Tony (Kanaan), Charlie (Kimball) and Ryan (Briscoe) and obviously Sage (Karam) this year. The pressure a driver is under in this race from the start of the month till the end is extraordinary. It really is it. And you see these guys and they all look kind of gaunt and they can get short-tempered, and I certainly did during the month. But the pressure I'm under is intense and I'm not under that pressure anymore. I went for my Pace Car medical yesterday. My blood pressure was considerably lower than it had been. That's not due to lifestyle, trust me. It's due to stress.

MODERATOR: We'll open it up for questions and we're working with both sides of the room with Taylor, and I'm over here.

Q: Dario, I have a couple of questions with the Camaro. You raced here, and nevertheless as a Pace Car driver now. Did you get some coaching on what is the important part of Pace Car driving? Is the Pace Car specially made or is it stock block from the showroom? What's the important part of a Pace Car? Do you have, by the way, also a second driver like in Europe who's doing the radio communication or just by your own in the car?

FRANCHITTI: The car is standard. It's — correct me if I'm wrong, guys, it's completely standard but it's got different lights. It has to have the strobes and everything. Otherwise it's standard. I think there's four of them that we have — three. There's three here for different ride and drives and stuff and they're all completely standard. Johnny Rutherford is determined to give me some Pace Car coaching. (Laughter)

Q: Do you have a second driver?

That's going to be an argument that lap when he tells me to pull off.

Q: Dario, I saw that team Target didn't qualify very well but when it comes down to Carb Day and they're at the top of the time charts. I talked with Sage yesterday, and Sage was very appreciative of your input. What's your level of involvement with the team and what kind of advice do you have for a young guy like Sage?

FRANCHITTI: Sage, this is his first time here and because he's working with the Dreyer & Reinbold guys — I'm not involved in the engineering side at all, they're dealing with all that with Sage. But I've been certainly involved almost coaching him because it's his first time here, and he's very receptive. He's very smart and obviously talented. So I give him different piece of advice that, you know, we talk about different things. With the other guys it's a whole different ballgame. You're not coaching any of those guys. I know how the team works very well. I'm an extra set of eyes that's maybe a little step removed and can maybe pick on some stuff that could help in some way, whether it's something that the drivers are doing or something in engineering that maybe we're missing. It's multifaceted work working with Target and with the other sponsors of the team. It's evolving all the time. This is the first time we've done this role.

Yeah, we didn't qualify well with any of the four Ganassi cars. But they're very strong in race trim, very strong, particularly the two Target cars. I actually told Dixon I would consider driving his car even in my sort of, you know, not a hundred-percent state because I think the car is good, both cars are good and both drivers are driving them really well. So they'll be tough to handle tomorrow, which is good.

FRANCHITTI: I thought the start has been pretty good as far as the formation the past couple years. The speed thing is really up to INDYCAR. Too fast and it gets spread out. Obviously, too slow and you've got issues, too. But I think as long as the they hold the formation, then I think it's — that's what we've been asked to do. That's what the fans have been really keen to see. They wanted 11 rows of three. I think that was really pressed home to the drivers every year. And so they've been really careful of that and we've been made aware or they've been made aware and I was made aware with them in years past that that's expected. But obviously everybody is trying to gain the advantage, too. You tell them it's 200 laps — yeah, yeah, that goes straight out of the head. You're trying to lead into Turn One every time.

MODERATOR: Dario, first of all, looking at some of these names: Bobby Unser, Roger Ward, Parnelli Jones; we mentioned Duke Nalon; you can go back to Carl Fisher. Of many of the contemporary drivers, I don't know anyone who had a greater or keener sense of history than you do did.

Just a personal comment: One of my great friends, the vice president of the United States Auto Club, named his son after Jim Clark. I know that was your idol. I think in terms of just the way you've conducted yourself, and your performance, no one has come closer. Congratulations. It's great to have you back.

FRANCHITTI: Thank you. Thank you. My mom got to hear that, too. She never heard that from my schoolteachers, trust me. (Laughter)

MODERATOR: So I guess he's available, and thank you very much for coming in.

FRANCHITTI: Thank you. Thanks for everything.