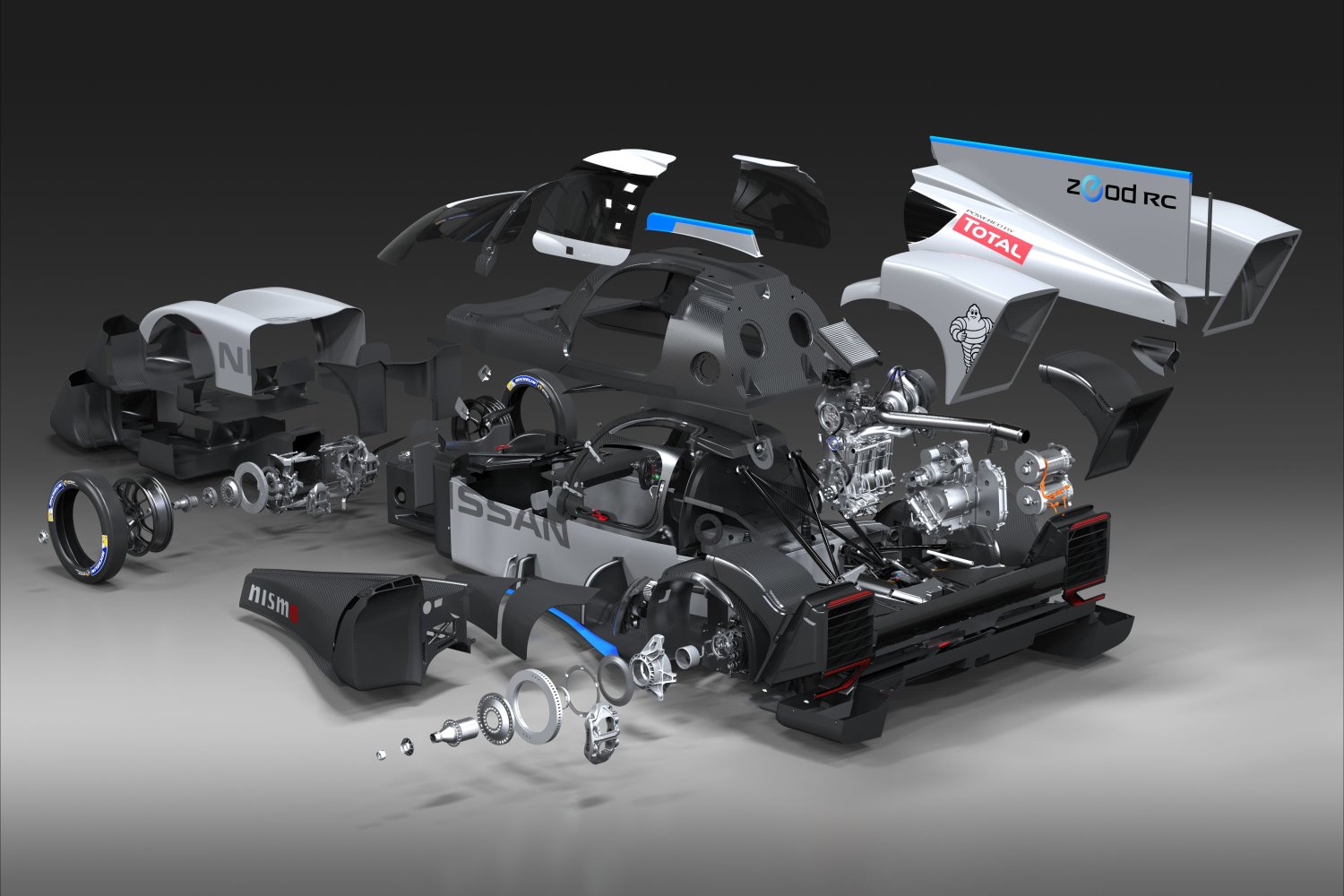 It features thousands of parts, brand new technology, has taken countless hours of design, engineering, construction and testing and now Nissan has revealed what is under the skin of the revolutionary prototype.

With every single component on the car down to the smallest nut and bolt modeled in computer aided design (CAD) technology, Nissan has released a unique image showcasing the inner workings of the car.

The car aims to complete the first all-electric lap of famous 8.5-mile circuit – running in virtual silence down the Mulsanne straight.

In addition to revealing the unique ZEOD “components" image, Nissan has also revealed video from the recent FIA crash test that every Le Mans prototype has to pass prior to competing.

"Our philosophy at Nissan is to really let fans get a behind-the-scenes look as to what it takes to develop the unique technology in the Nissan ZEOD RC," said Darren Cox, Global Head of Brand, Marketing & Sales, NISMO.

“Most fans don't get to see what is under the skin of these cars and certainly don’t get the opportunity to see what happens at a crash test. We can’t have everybody in the garage at the race, but through revealing video and images like this and pushing continual updates via NISMO.TV, the fans will feel closer than ever before.

“What we’re trying to achieve is actually quite remarkable. Taking a Le Mans prototype around the full 8.5-mile circuit at Le Mans on nothing but electric power is one thing, but doing it with a top speed of more than 300km/h and completing a lap faster than a GT car is incredible.

“We know it was going to be a very big challenge. We’re pushing battery technology to whole new levels. At Nissan we had a lot of data to refer to from our leadership role in electric vehicles for the road, but it has been a very intense development process.

“We’ve discovered why nobody has attempted this in the past. It has certainly presented plenty of technical challenges but that is why we undertake projects like this. Motorsport compresses the development cycles dramatically – we’re learning new things on a daily basis."

The Nissan ZEOD RC is powered by two 110kw electric motors that transfer power to the wheels via the same gearbox that is connected to the internal combustion engine.

The car aims to complete a lap of Le Mans on battery power faster than a GT LM category Le Mans entry. The remarkable 400 horsepower, 40 kilogram, 1.5 liter, three-cylinder turbocharged engine will start the race with the electric motors taking over for a final all-electric lap after each fuel stint.

Erdos is stepping in for Lucas Ordonez and Satashi Motoyama who are on duty in Super GT competition in Japan on the same weekend..

The Le Mans test day will be part of week two of the #eatsleepRACErepeat program where Nissan and NISMO teams, drivers and entrants will tackle 22 events in seven countries over seven weeks.

The unique program was announced on Monday with Nissan also set to make a major announcement about its 2015 plans in London this Friday at 2:00pm local time. The news event featuring Nissan Executive Vice President and Chief Planning Officer, Andy Palmer will be streamed live on NISMO.TV