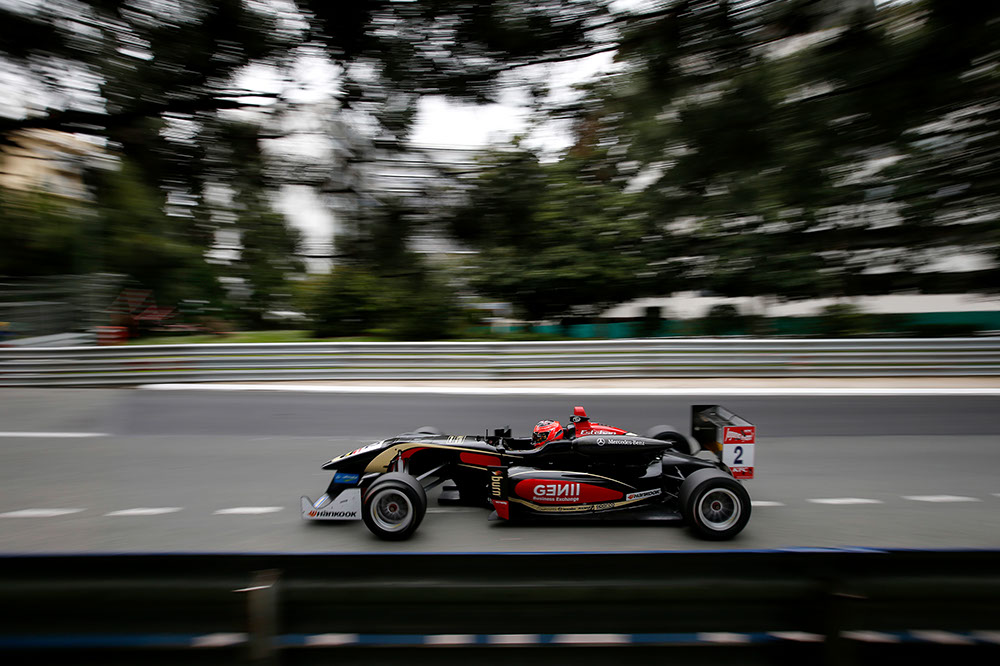 Rookie driver Esteban Ocon (Prema Powerteam) extended his points’ lead in the FIA Formula 3 European Championship with an undisputed victory in the streets of Pau. At the 2.76 kilometers long street circuit, the Lotus F1 junior driver took the lead at the start and safely brought first place home in spite of two safety car interventions. Lucas Auer (kfzteile24 Mucke Motorsport) took the checkered flag in second place from Max Verstappen (Van Amersfoort Racing), the second-best rookie in the classification. For Ocon, it was already his third victory from seven races held so far this season. FIA president Jean Todt presented the trophy to Ocon on the podium after the race.

Ocon already having claimed pole position on the day before, he used it in his first race at Pau to take the lead as the race got underway. In the following laps, the Formula 3 novice was able to pull clear from the rest of the field while his two main rivals, Lucas Auer and Max Verstappen, were involved in close battles for second. Eventually, the more experienced Auer had the upper hand against 16-year-old rookie driver Verstappen.

Behind the first three drivers, Jake Dennis (Carlin) quickly dropped back; the third-best rookie in the field had to defend his position from his team-mate Jordan King (Carlin). As a reward, Dennis secured fourth place in his first-ever Formula 3 race at Pau. In sixth place, Felix Serralles (Team West-Tec F3) scored the best result to date for his newcomer team West-Tec F3. He finished ahead of Antonio Giovinazzi (Jagonya Ayam with Carlin), Edward Jones (Carlin), Richard Goddard (ThreeBond with T-Sport) and Sean Gelael (Jagonya Ayam with Carlin). For 17-year-old Indonesian Gelael, it was his first FIA Formula 3 European Championship point.

The race was neutralized behind the safety car twice. On the opening lap already, a crash by Alexander Toril (ThreeBond with T-Sport), in which birthday boy Mitch Gilbert (Fortec Motorsport) was involved as well, brought the yellow flags out. Italian Michele Beretta (Eurointernational) caused the second safety car phase as his car got stuck on the track.

Esteban Ocon (Prema Powerteam): “I am really happy to have won a race in my home event in France. My start wasn’t too good, but I still managed to take the lead. After the two restarts, I succeeded in holding on to first place and I tried to pull a gap right after that. After that, I could control the race. Of course, the experience I gained at Macau last year helped me, although the two tracks really aren’t identical."

Lucas Auer (kfzteile24 MÃ¼cke Motorsport): “My start was good, but not good enough to take the lead. At the start of the race, I wasn’t really fast, so that Max was able to follow me. The battle with him was nice and fortunately, we decided to leave each other enough room."

Max Verstappen (Van Amersfoort Racing): “For me, the battle with Lucas was great fun, too. I wanted to overtake him, so I just had to try something, but because I was on the outside in the next corner, I let him go. I wanted to avoid an accident, because third place also is a good result and gives me valuable points."