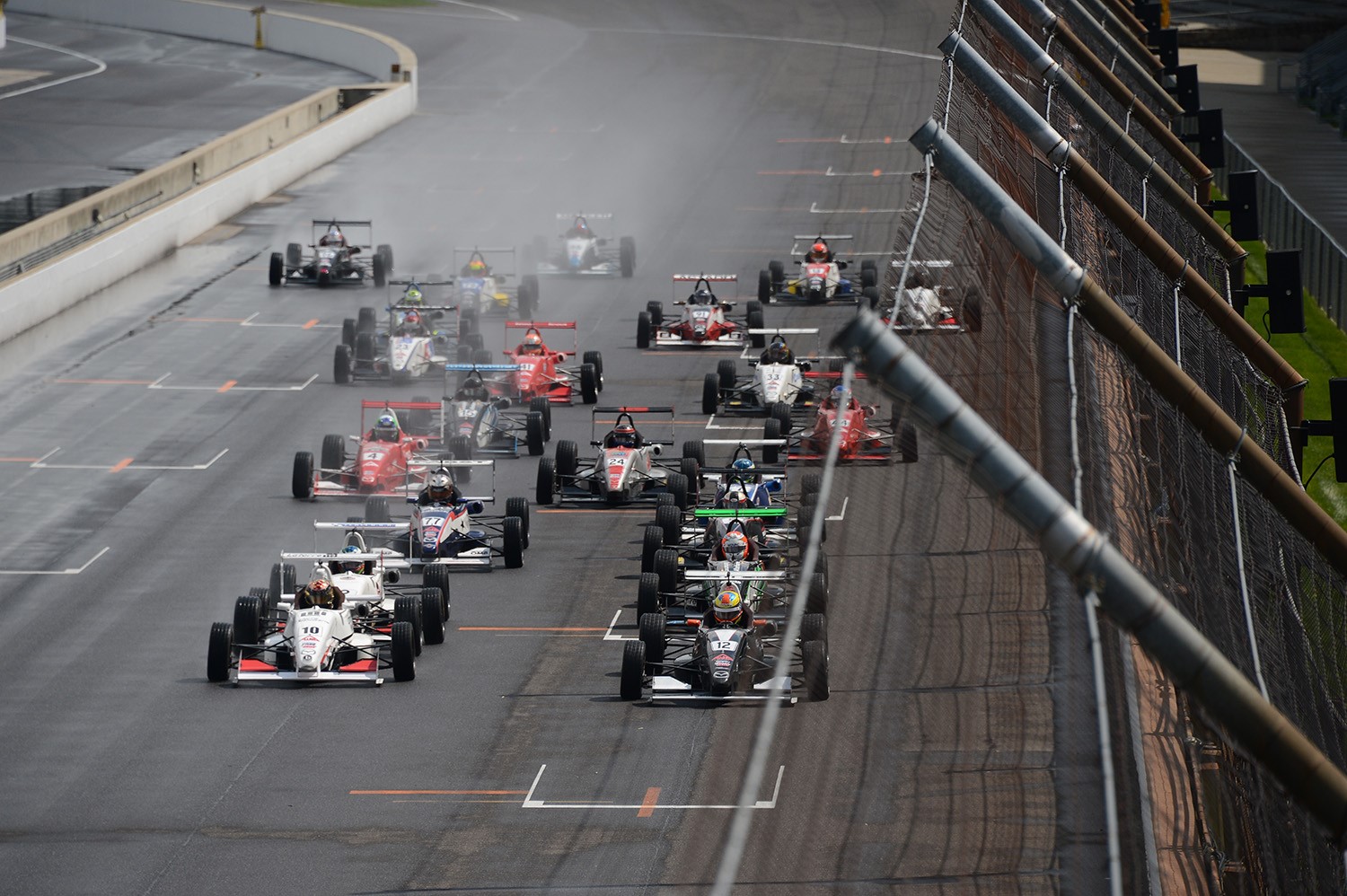 A thrilling fifth round of the Cooper Tires USF2000 Championship Powered by Mazda fell the way of rookie driver Will Owen, from Castle Rock, Colo., who took advantage of an inspired strategic call by his team, Pabst Racing, to score a historic and unexpected victory on the series' first-ever visit to the newly reconfigured Indianapolis Motor Speedway road course. Jake Eidson led the most laps on his way to a second-place finish for defending champion team Cape Motorsports with Wayne Taylor Racing, while another rookie, Aaron Telitz, completed the podium for ArmsUp Motorsports.

A heavy rain shower during qualifying for the Verizon IndyCar Series' inaugural Grand Prix of Indianapolis had dissipated by the time the USF2000 cars took to the 2.439-mile track, but the track remained wet, so all 22 starters began on grooved, wet-weather tires. After the initial start was waved off due to the field being out of order, the two Cape Motorsports with Wayne Taylor Racing Van Diemen-Mazdas of polesitter Florian Latorre and Eidson hooked up to lead the pack on the long drag race toward Turn One.

Frenchman Latorre turned into the corner in the lead, only to slide wide at the exit and lose a handful of positions, whereupon a couple of other incidents farther back in the field brought out the caution flags. As the field slowed down behind the Pace Car, Pabst Racing strategist and accomplished former driver Tonis Kasemets realized the track was drying rapidly and made the decision to call Owen into the pits for a change to slick (dry weather) Cooper tires.

Eidson led the field at the restart, only to make a mistake and slip behind Brazilian Victor Franzoni (Afterburner Autosport). These two were chased at a distance by Telitz after debutant Tim Hollowell, who lined up on the outside of the front row for new team GBI Racing, fell back into the pack.

Eidson piled the pressure on Franzoni, who staunchly defended the inside line into Turn One until Lap 11, when Eidson hung on bravely around the outside, then edged ahead as they battled into Turn Two. Eidson quickly pulled out a handy margin over his rivals, especially when Franzoni opted to pit for slick tires after 13 laps, but he was far from in the clear. Instead, Owen quickly loomed large in his mirrors, taking full advantage of the additional grip on an almost completely dry race track.

Owen moved into second on Lap 13, at which point he still trailed Eidson by 2.7 seconds. Not for long. By the following lap, Owen was in the lead, scoring an accomplished and richly deserved victory for himself and Pabst Racing. Eidson held on for second – his third podium finish of the season – ahead of Telitz and Latorre.

Equally impressive was the performance of 14-year-old Colton Herta (JAY Motorsports with Curb-Agajanian), who qualified third only to be banished to the back of the grid – along with provisional pole-winning JAY Motorsports teammate Henrik Furuseth – after both failed post-qualifying technical inspection. Herta, from Valencia, Calif., the son of former Indy 500 winning team owner and accomplished driver Bryan Herta, moved steadily through the pack to claim the Tilton Hard Charger Award for a gain of 17 positions.

Additional awards included the RePlay XD Move of the Race to Owen for his pass for the lead on the outside of Turn 14 as they were completing Lap 14 as well as the Staubli Award; and the PFC Award and customized Race Energy charger – the official battery of the ladder series – which went to the winning team of Pabst Racing.

Race Two of the Grand Prix of Indianapolis for USF2000 will take the green flag tomorrow morning at 11:10 a.m.