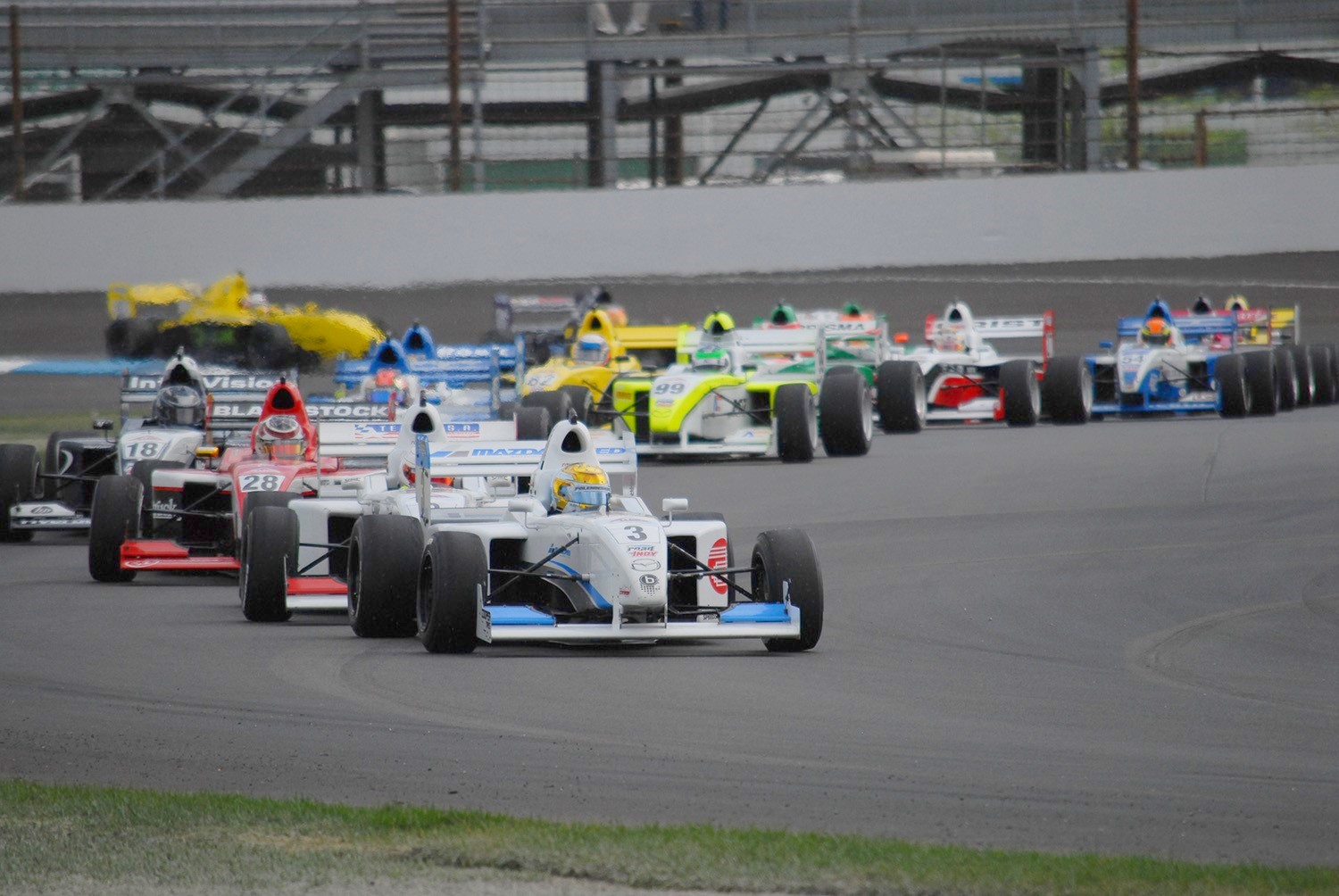 Canadian Scott Hargrove finally broke through into Victory Lane this afternoon at the Indianapolis Motor Speedway following an action-packed race and an impressive performance for Cape Motorsports with Wayne Taylor Racing in the first of two races that will constitute the Allied Building Products Grand Prix of Indianapolis. Shelby Blackstock (Andretti Autosport) finished second to earn his best finish of the season so far, while Hargrove's teammate, Neil Alberico, finished third after leading for much of the race.

A thrilling fifth round of the Pro Mazda Championship Presented by Cooper Tires began in dry, windy conditions with pole-winning championship leader Spencer Pigot (Juncos Racing) being virtually swamped as the field accelerated away from the rolling start. All of a sudden, Pigot found himself in sixth as the field swept into Turn One. He briefly made up a couple of positions in the ensuing melee, only to be clipped from the rear as he sped toward Turn Two. An instant later, Pigot was spinning backward and several other cars also were involved in incidents, including Brazilian Pipo Derani (Team Pelfrey), who had started fifth.

The caution flags waved right away, with Hargrove, who had started second, in the lead ahead of teammate Alberico, who had somehow made up six positions on the chaotic opening few turns.

Nor was Alberico done. He made a fine restart, challenging Hargrove through Turns One and Two, and while the Canadian just about held onto his advantage, he then squandered it with a mistake at Turn Four which gifted the lead to Alberico. Ryan Booth (JDC MotorSports) also charged into contention, with Blackstock and Nicolas Costa (M1 Racing) hot on his heels.

After another full-course caution, Alberico found himself under intense pressure from Hargrove, Booth and Blackstock, the foursome dicing furiously as they negotiated the recently reconfigured 2.439-mile race track. Sadly, the scrap came to a premature conclusion when Booth misjudged his attempt to pass Hargrove for second in Turn Seven and spun, making contact with race leader Alberico at the same time.

Alberico, miraculously, was able to continue, but after yet another caution period he came under siege again, this time from Hargrove. The two teammates banged wheels at Turn Two, with Hargrove taking the lead and Blackstock also finding a way through into second place, which is how they finished after 19 thoroughly entertaining laps.

Teenager Kyle Kaiser (Juncos Racing) finished fifth during an eventful race which saw him run as high as third and as low as eighth, while the Team Pelfrey pair of Dalton Kellett and Brandon Newey drove by far their most impressive races of the season thus far to finish fifth and sixth, narrowly ahead of Garett Grist (Andretti Autosport), Jose Gutierrez (Juncos Racing) and Pigot, who survived another mid-race skirmish – and a pit stop to replace a damaged nosecone – to cross the line in eighth.

Contingency awards included the Quarter Master Hard Charger Award for most positions gained to local Indianapolis resident Newey, who advanced from 14th to fifth; the PFC Award and customized Race Energy charger – the official battery of the ladder series – to Cape Motorsports with Wayne Taylor Racing; and the Staubli Award to Alberico.

Hargrove earned the RePlay XD Move of the Race for his pass for the lead on Alberico on the last restart in Turns 2/3.

The Pro Mazda Championship Presented by Cooper Tires will continue with the second leg of the Allied Building Products Grand Prix of Indianapolis slated to take the green flag at 12:20 p.m. tomorrow.

Scott Hargrove, #3 MAZDASPEED/Analytic Systems/RaceEnergy/Metal Action Machining (Cape Motorsports with Wayne Taylor Racing): "That was probably one of the most fun races that I have ever had. I made a really good start and went to the outside of Spencer [Pigot] and we were drag racing into the first corner and all I knew is that I came out into the lead. Neil [Alberico] was right behind me and he went to the inside going through Turn 4 and then the outside and I completely blew the turn and he got the lead. I stayed there behind Neil but every restart was so much fun – it was wheel-to-wheel. I have so much respect for the guys in this series to be able to race that hard. It was a phenomenal job by Cape Motorsports. It's an awesome feeling and I can't thank MAZDASPEED and Analytic Systems enough."