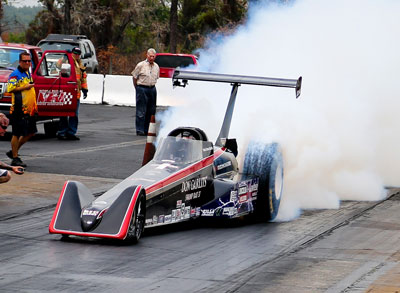 Apparently, even at age 82, "Big Daddy" Don Garlits never gets tired of breaking records. The drag racing icon added another record to a long list of achievements April 30 when his newest machine, Swamp Rat 37, set the new quarter-mile record for an electric vehicle with a pass of 7.258 seconds at 184.01 mph, eclipsing the old records 7.95 and 156.00 mph.

Unlike the nitro-burning engines that powered so many of Garlits’ earlier Swamp Rats, Swamp Rat 37 gets its juice from a 1500-amp array of lithium polymer batteries built by High Tech Systems LLC. The batteries reportedly are capable of developing the equivalent of 2,000 horsepower, which should be more than enough to push Garlits and the car to his intended goal of more than 200 mph, the same speed barrier that Garlits first broke in a front-engine Top Fueler in 1964.

The car was built by Brad Hadman and Mike Gerry and includes a rear monowing similar to those found on Garlits’ more recent Swamp Rat Top Fuelers and a semi-enclosed front end. High Tech Systems constructed the battery pack, and Lawless Industries provided the electric motors. The late J.T. Stewart was an early part of the project. The car made its first shakedown passes more than a year ago, in December 2012, at Auto-Plus Raceway at Gainesville.

Garlits, who has not driven a Top Fueler in competition in more than a decade, nevertheless has kept himself busy running a Drag Pak Challenger in Stock eliminator, making exhibitions and appearances with his older, restored dragsters and, of course, running his famous Museum of Drag Racing in Ocala, Fla.