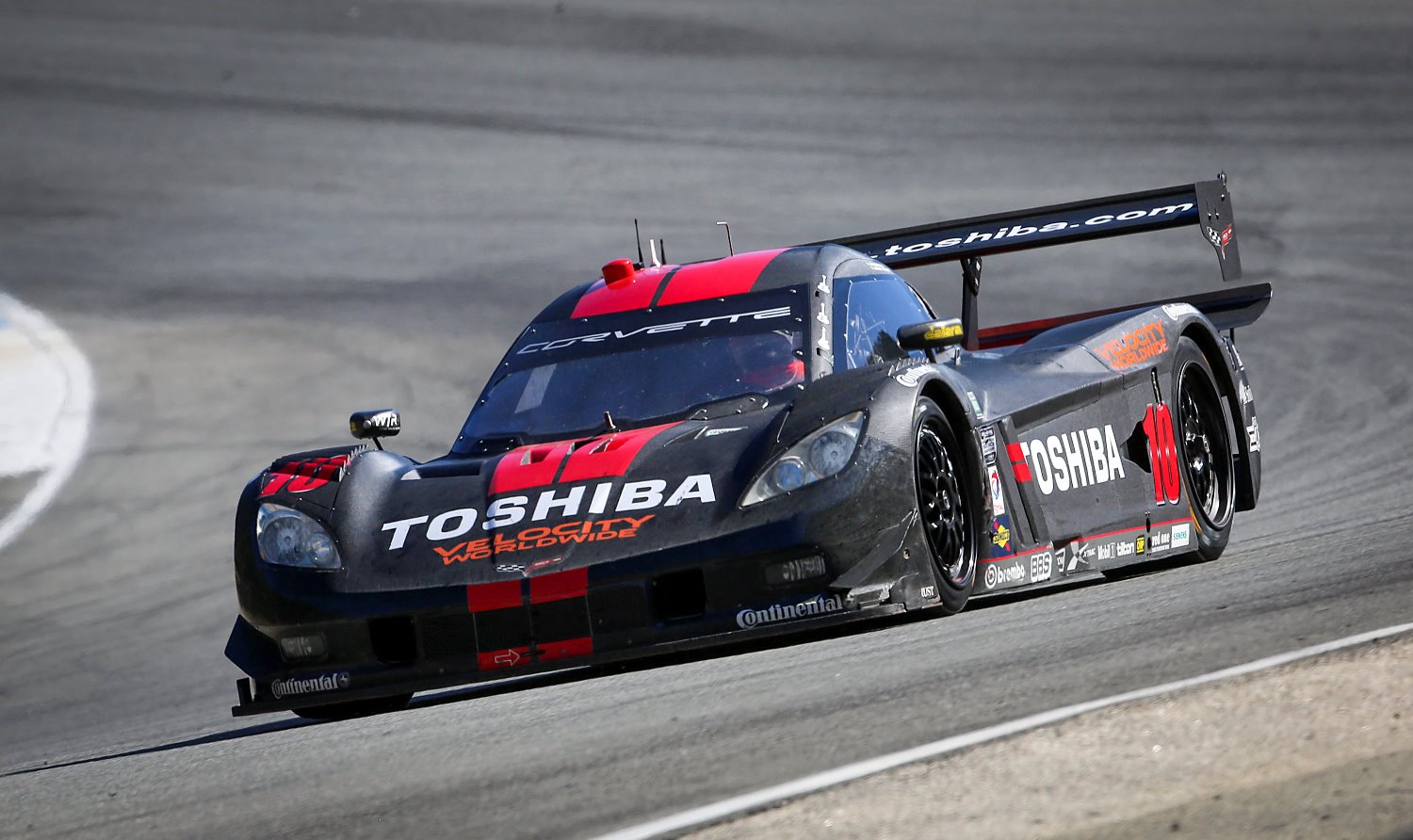 It was just seven months ago that 22-year-old Jordan Taylor and his veteran Italian co-driver Max "The Ax" Angelelli powered their way to a dominating victory at Mazda Raceway Laguna Seca and set the stage for their 2013 driver championship-clinching effort, one race later.

Taylor and his 24-year-old brother Ricky Taylor make a triumphant return with the No. 10 Konica Minolta Chevrolet Corvette Dallara Daytona Prototype team for Wayne Taylor Racing (WTR) this weekend with the hope of recreating that winning magic when they take to the 2.238-mile, 11-turn hillside road course during Sunday’s Continental Tire Monterey Grand Prix.

Round four of the 2014 Tudor United SportsCar Championship is a two-hour affair featuring the newly unified series’ Prototype-class and GTLM-class competitors, as was the case three weekends ago when the Taylor brothers co-drove to a solid runner-up finish on the Grand Prix of Long Beach seaside street circuit, some 300 miles down the California coast.

In last September’s GRAND-AM Rolex Sports Car Series race at Laguna Seca, the veteran Angelelli qualified the No. 10 Corvette DP second and held his position behind polesitter Richard Westbrook over the opening 30 minutes of the two-hour, 45-minute race. He pitted under caution at the 30-minute mark to hand the car over to Jordan Taylor. Quick work by the WTR crew put Taylor back on track in the lead, and the young driver first held off IndyCar Series veteran Scott Dixon and then sport car veteran Scott Pruett in the twin Chip Ganassi Racing with Felix Sabates entries en route to the checkered flag.

It was the team’s fourth of five victories in 2013 and its second of three in a row to cap the Rolex Series driver championship in style. Taylor led the final 72 laps in the 105-lap race and hoisted the first-place trophy for the sixth time in his Rolex Series career.

Ricky Taylor has enjoyed his share of success at Laguna Seca, as well, although he will be chasing his first career victory at the scenic racetrack this weekend. During his three-year run as Angelelli’s co-driver in the No. 10 Corvette DP from 2010 through 2012, the older Taylor brother qualified on the pole once in two attempts at Laguna Seca. He helped lead a race-high 52 of 105 laps in that 2011 race that netted a solid third-place finish. He qualified fourth and co-drove with Angelelli to a seventh-place finish at Laguna Seca in 2012, and last year co-piloted the No. 90 Spirit of Daytona Corvette DP with Westbrook to an eighth-place finish there.

Having kicked off their relationship with Konica Minolta with that solid second-place finish in Long Beach three weekends ago, the brothers Taylor would like nothing better than to go one better and score their first win for their brand new sponsor at one of the most legendary road courses in the world this weekend.

Practice for Sunday’s Continental Tire Monterey Grand Prix begins at 12:35 p.m. EDT Saturday with Prototype-class qualifying set for 9 p.m. Sunday’s two-hour race takes the green flag at 5:45 p.m. with live television coverage provided by FOX Sports 1 beginning at 5:30 p.m. A live online video stream will also be carried by IMSA.com with a prerace show beginning at 5 p.m. The Motor Racing Network’s live radio broadcast will be available in its entirety on IMSA.com and MRNRadio.com, as well as select radio networks beginning at 5:45 p.m. Live timing and scoring of all on-track sessions is available at IMSA.com and the IMSA smartphone app.

You and Max scored a dominating win at Laguna Seca last year. What is your memory of that big day as it springboarded you to the driver championship?

“Going into Laguna last year, we had some momentum after our win in Kansas. Kansas was my first win as a closing driver, so I was excited to head to Laguna with that confidence. We were fast all weekend last year. Max put the car P2 in qualifying and ran there in the race, being held up behind the leader. Then the guys did what they did all year – got us out into the lead in the pits when I got in the car. From there, we just controlled the race from the front. The car was extremely quick. We had two restarts near the end of the race but I knew as long as I made it through turn one with the lead, we would be in good shape. I think after that dominant of a race, we were very confident for the championship heading into another high-downforce track like Lime Rock."

Where does Laguna rank on your list of favorite tracks and why?

“Laguna is a very unique track. Obviously, it has the Corkscrew, which is like nothing else we see the rest of the year. It’s a very low-grip, smooth surface, which is very temperature-sensitive. The layout itself is pretty fun. It’s very much a momentum track with flowing corners. There are only a few very low-speed corners leading onto straights. It’s a tough place to pass. You usually have to use traffic to your advantage to try and make an opportunistic move. The area around Laguna is extremely nice – one of the nicest that we see all year. Staying in Monterey, you get all the nice restaurants and great night life."

Once again we are racing an unusual distance – two hours. Are there any particular strategy issues involved with that?

“I’m not sure, yet, how our strategy will look but, with it being a little shorter than our traditional distance, it makes it that much more of a sprint race. That means we'll be racing hard for all two hours. Our team, historically, seems to do well in these shorter-distance races. We won a few last year."

You and your brother Ricky competed in a triathlon last weekend. How did it go?

“We did the St. Anthony’s triathlon in St Pete. I think it’s the third-biggest triathlon in the U.S. I did the sprint triathlon distance, which is basically half of the Olympic distance. I think a triathlon is a fun event to sort of gauge your fitness. The result of the race makes it pretty clear, and you can use the result as a baseline to try and beat next time. I had a pretty good swim and bike, then had some cramps on the run which pretty much ruined the race for me. I won my age group, but that didn’t mean much as I was in a small group."

Talk about your previous visits to Laguna Seca and what your expectations might be for this weekend.

“Laguna has always been good for me. The results have not necessarily been there, but we have been on pole in the past and have run well. I think we have a good baseline after the team’s performance last year, so our expectations are pretty high."

Where does Laguna rank on your list of favorite tracks and why?

“It is always nice going to Laguna Seca. It’s such an iconic track. As a layout, it’s actually not the most exciting in the world. The corners are quite slow. But, as a racetrack, it can be quite exciting between lapped traffic and the interclass battles."

Once again we are racing an unusual race length – two hours. Are there any particular strategy issues involved with that? How do you expect the race to go?

“It will be very interesting, I expect the P2 (LMP2-class) cars to be pretty quick there, so we will have to really be on our game, especially if they manage to get track position on us. I think it will be intense racing but very respectful between classes as it was very nice racing with the GTLM class at Long Beach.

You competed in a triathlon close to home in St. Petersburg last weekend. How did that go?

“It was great. It was called the St. Anthony’s triathlon and I did the Olympic distance as a relay with my girlfriend Emily. I did the swim and bike and she brought it home on the run. We finished eighth in the coed relay and I did not drown in the Gulf of Mexico or fall on my bike and she did not pass out from the heat on the run, so that was good. I hope to do some more, but I’ll have to check the schedule as our summer is quite busy with Tudor Series races."

It was a near-perfect race for the team last fall when Jordan and Max co-drove to a dominating win. What are your expectations for this weekend at Laguna Seca?

“It was certainly another huge win for us, but this year is a whole new year and, with all the significant changes to our cars with the new Tudor United SportsCar Championship, we’re really not going to know how well our package will take to the track at Laguna Seca this time around until we practice Saturday morning. We were strong at the Daytona 24-hour and also at Long Beach and we weren’t too far off at Sebring. I’ve always enjoyed coming to Laguna Seca and it’s definitely a driver’s circuit. I just hope Ricky and Jordan can continue the momentum they started together with their second-place finish at Long Beach and perhaps bring our new sponsor Konica Minolta its first win this weekend. That would be absolutely fantastic."