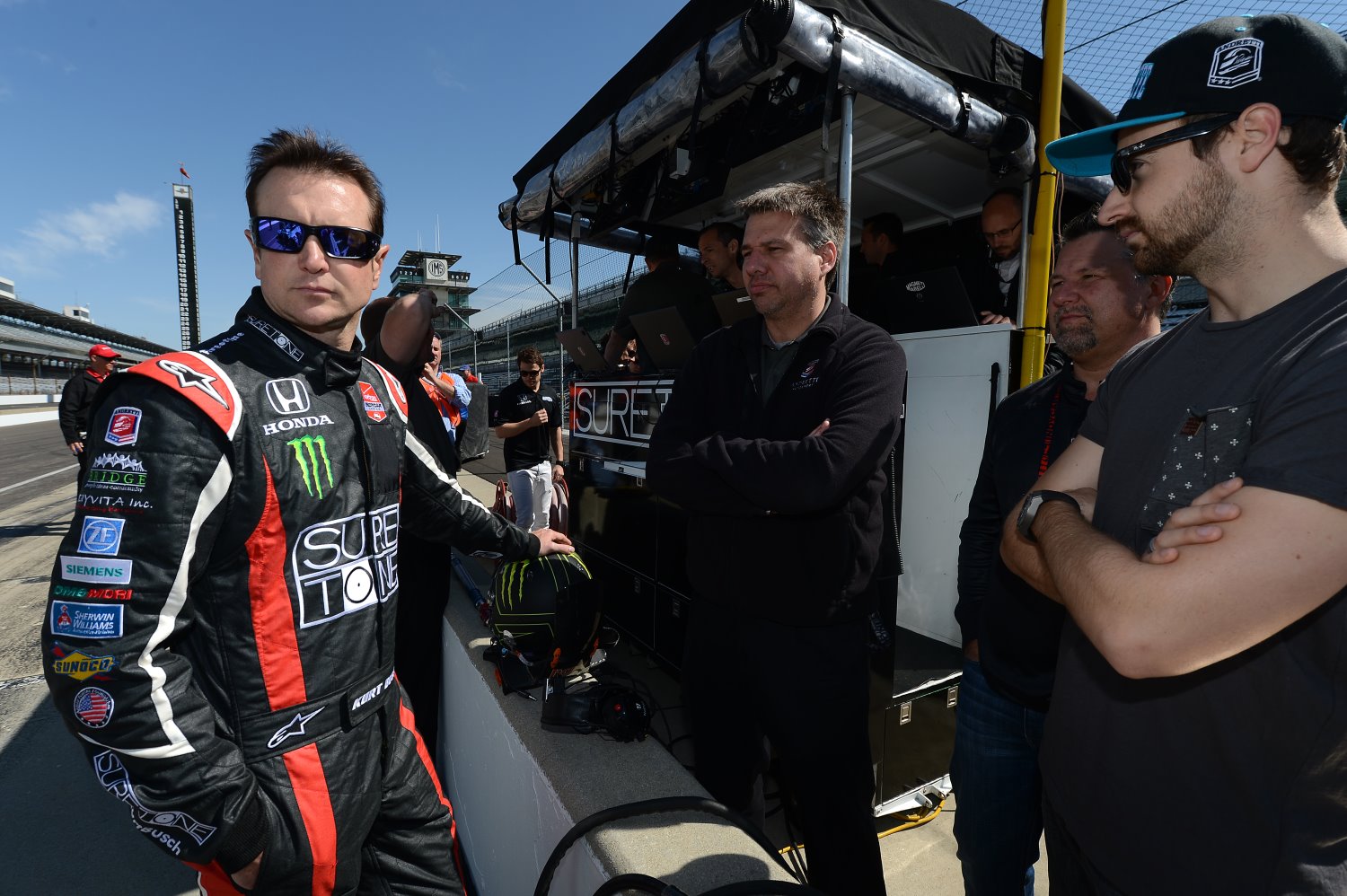 "Go out and have fun," Andretti Autosport engineer Craig Hampson told Kurt Busch as he headed out on another run around the Indianapolis Motor Speedway.

The former NASCAR champion heeded the advice on the 2.5-mile oval during a refresher program arranged in conjunction with his schedule that will get more hectic during May.

Busch, 35, will attempt to become the fourth driver to attempt the "double" — competing in the 98th Indianapolis 500 and the evening stock car race in Concord, N.C., on May 25.

John Andretti, Robby Gordon and Tony Stewart have each done it, with Stewart — co-owner of Busch's No. 41 Sprint Cup car at Stewart Haas Racing — becoming the first in 2001 to complete all 1,000 miles.

"This attempt is something serious," said Busch, who is scheduled to join other Indy 500 rookies May 5 at the Speedway for additional laps. "It's an amazing challenge."

Busch was off to a quick start learning the Honda-powered No. 26 Suretone car, recording a best of 220.844 mph on 66 total laps before rain brought an early end to the day which featured stiff headwind entering Turn 1 of the iconic oval,

"It really makes you think," Busch said. "Overall, it was a good day just to settle in with the team and advance further than rookie orientation. It felt good to give feedback to the team from the car and have them explain things to me how we're going to move forward. They continued to change downforce combinations on the car and it was just neat to feel all that and check it off the list.

"The last run we made was just about where they would unload for race trim."

Because he tested last May on the oval last year in an Andretti Autosport car, Busch was required to complete the formal refresher program. In addition to demonstrating car control, placement and consistent driving pattern, the program consists of 30 laps that constitute the second and third phases of the Rookie Orientation Program at speed intervals based on track and weather conditions.

"Now that all the newness and moments of smiling and 'this is Indy' are wearing off, that's when the serious hat goes on and we start to ramp up the program."

Andretti Autosport's James Hinchcliffe, who joined multiple other Verizon IndyCar Series drivers watching the first cars on the oval in 2014, said he expects Busch to be among the '500' contenders.

"I think we're going to be strong in the race and I think we've showed that the past couple of years," said Hinchcliffe, who drives the No. 27 United Fiber & Data car. "He has more professional races under his belt than the rest of the field combined with as many races as NASCAR runs and I'm sure he's going to adapt pretty quickly."

Villeneuve shakes off rust during refresher

Villeneuve recorded 83 laps in the No. 5 Dollar General-sponsored car for Schmidt Peterson Motorsports with a best of 217.742 mph as part of his refresher test. The first practice session for "The Greatest Spectacle in Racing" is May 11, with qualifications May 17-18.

"It took a while to get there. The first few laps were surprising because it felt like I was going fast and I looked and it was 180 (mph)," Villeneuve said. "I thought, 'There's still a long way to go,' and then 190. And another 10 laps I started getting in the rhythm, and once you start going flat all around it becomes easy. I think your brain, your vision just needs to get used to driving at speed."

In addition to demonstrating car control, placement and consistent driving pattern, the refresher program consists of 30 laps that constitute the second and third phases of the Rookie Orientation Program at speed intervals based on track and weather conditions.

"When I came here last time, I had already driven on ovals at high speed," said Villeneuve, who was the 500 Rookie of the Year in 1994 when he finished second. "It felt crazy fast back then and it felt crazy fast today. We weren't trimmed out yet, but there was no point with the (25 mph) wind and the track was very green. At the end, we even managed to work on the mechanical set-up of the car and that made it nicer. "Villeneuve went on to claim the 1995 season championship before moving to Formula One, where he won the 1997 World Championship and a total of 11 wins in 34 starts. He's currently an F1 commentator as well as competing in World Rallycross.

If Villeneuve qualifies for the race, he'll set a record for the biggest gap between starts held by Cy Marshall and Roland Free between 1930 and 1947. The race marked the 50th anniversary of track ownership by the Hulman-George family.

Sage Karam says being afforded the opportunity to compete in the 98th Indianapolis 500 Mile Race "is a very big day for me."

Chip Ganassi Racing Teams announced an agreement with the 2013 Indy Lights champion on a multi-year deal as a development driver, which will begin with the Indianapolis 500 through an alliance with Dreyer & Reinbold Kingdom Racing to drive in the No. 22 entry.

Karam, 19, of Nazareth, Pa., competed twice with Chip Ganassi Racing with Felix Sabates this year in the Rolex 24 At Daytona and 12 Hours of Sebring sports car races.

"I couldn't be happier to join Chip Ganassi Racing's Verizon IndyCar Series program," said Karam, a high school senior. "It is honestly a dream come true for me and my racing career. I've been very fortunate to participate in a few IMSA races for Chip with the team, and I can't wait for my first experience in the Indianapolis 500."

Karam will participate in the Rookie Orientation Program on May 5 on the 2.5-mile Indianapolis Motor Speedway oval. The opening day of practice is May 11 — a day after the inaugural Grand Prix of Indianapolis on the IMS road course — and qualifications are May 17-18. The race is May 25.

Karam won the 2010 USF2000 Championship and was rookie of the year in Star Mazda in 2011. He won the Star Mazda title the next year, and is the only driver to win races in each level of the Mazda Road to Indy ladder.

"Sage is a unique talent that we believe is a future star of the sport," Ganassi said. "Even at a young age, he has been successful at every level that he has raced at. It is nice to see his poise and tenacity on the racetrack as I think that will translate well to his driving at Indianapolis Motor Speedway for the 500. He reminds me of the two other recent young drivers that we have in our program, Kyle Larson and Dylan Kwasniewski."

Dreyer & Reinbold Racing, which fielded Oriol Servia in the 2013 Indianapolis 500 (11th place), joined INDYCAR in 2000 and made immediate impact with Robbie Buhl winning the season-opening race at Walt Disney World Speedway from the 22nd starting position.

Klipsch will sponsor Newgarden's No. 67 car

Klipsch Audio will be the primary sponsor on the No. 67 Sarah Fisher Hartman Racing entry driven by Josef Newgarden in the inaugural Grand Prix of Indianapolis on May 10.

Indianapolis-based Klipsch, a leading global manufacturer of premium speakers and headphones, has partnered with the Verizon IndyCar Series team since 2013 as an associate sponsor.

Klipsch will use Newgarden's image on a full-size advertisement at the Indianapolis International Airport, creating increased exposure for the company's premium products to fans flying to Central Indiana for the Grand Prix of Indianapolis and the 98th Indianapolis 500.